The performance of the economy clearly has an influence on presidential elections. What are such models saying about the like outcome of an Obama-Romney election? Here are three examples: from Ray Fair, from Douglas Hibbs, and from the team of Michael Berry and Kenneth Bickers.

For some years now, Ray Fair has been experimenting with different relationships between economic variables and the outcome of national elections. For example, my own Journal of Economic Perspectives published an article he authored on this subject back in the Summer 1996 issue.  Just after the results of the November 2010 elections were known, he published "Presidential and Congressional Vote-Share Equations: November 2010 Update." Based on the fit of the past  historical data, he offers this equation:

Obviously, the third quarter GDP of 2012 GDP numbers will not be officially announced until after the election--although one can argue that they will be perceived by people in the economy as they happen. Just for the sake of argument, if one plugs in a 1.5% growth rate for real per capita GDP in the first three quarters of 2012, a 1.5% growth rate for the GDP deflator (a measure of inflation) and 2 quarter of real per capita GDP growth above 3.2% (that is, fourth quarter 2009 and fourth quarter 2011), then Fair's equation says that Obama will get 50.4% of the two-party vote--and thus (assuming not too much weirdness in the Electoral College) would narrowly win re-election.


An obvious question about Fair's equation is that it doesn't t include a separate variable for the unemployment rate. Why not? The answer is that researchers like Fair have experimenting with a wide variety of different kinds of economics data. For Fair, the equation given above is the one that predicts best over the elections from 1916 up through 2008. It's worth remembering that presidents have often been re-elected with a fairly high unemployment rate, like Franklin Roosevelt during the Great Depression, or Ronald Reagan when the unemployment rate was 7.4% in October 2004.

However, my guess is that in the context of 2012, Fair's equation will tend to overstate Obama's changes. I think the sustained high rates of unemployment will be more salient in the 2012 election than they may have been in some past elections. Also, Fair's equation is that it gives Obama credit for the low rate of inflation during his term of office--but it's not clear that in 2012, the low rate of overall inflation is getting Obama a lot of political credit. Fair's equation gives Obama extra credit for the two good quarters of economic growth during his presidency--and I'm not sure that in the broader context of a slow recovery, Obama will get much political credit for those two quarters.

Douglas Hibbs takes a related but different approach to economic variables and presidential election outcomes in his "Bread and Peace" model. He starts off by using the average of per capita real economic growth over the incumbent president's term, and uses that to predict the incumbent's share of the two-party vote. The result, as shown in the best-fit line in the figure below, is that some of the years where the incumbent did much worse than expected were years with a large number of military fatalities, like 1952 and 1968. 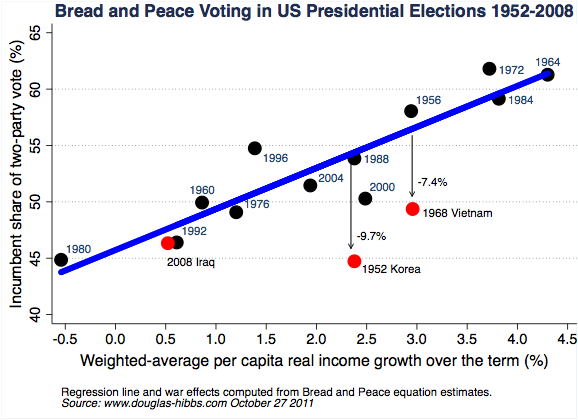 Thus, Hibbs added a second explanatory variable, military fatalities, and with the addition of that extra factor most of the points showing actual voting shares fall closer to best-fit line.  As the figure shows, based on economic data through the end of 2012, Obama would receive 45.5% of the two-party vote. The Hibbs equation doesn't give Obama credit for a low inflation rate. 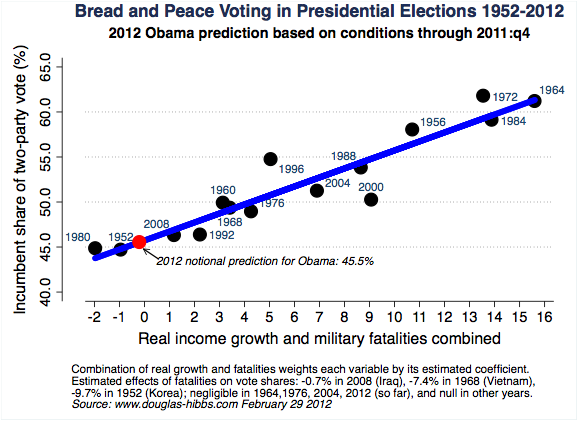 Like Fair, Hibbs doesn't include an unemployment variable. But of course, these sorts of disputes over what should be included in drawing connections from economic data to election results just illustrates a broader point: every election has unique characteristics, starting with the actual candidates. In the 1996 election, Bill Clinton did better than would have been expected based on Hibbs formula. In the 2000, Al Gore (who was from the "incumbent" party), did considerably worse than would have been expected. Public perceptions of the candidates, non-economic policies, and the actual events during the campaign clearly matter as well.

Michael Berry and Kenneth Bickers take a different approach in "Forecasting the 2012 Presidential Election With State-Level Economic Indicators."  Instead of trying to predict the overall national popular vote, they instead estimate an equation for each of 50 states and the District of Columbia. They also use a more complex set of variables. They emphasize economic variables like the change in each state in real per capita income, the national unemployment rate, the state-level unemployment rate. But they also include variables for the vote received by that party in the previous election, a variable for whether the incumbent is a Democrat or a Republican, and for how many terms in a row the presidency would be held by a particular party. These terms then interact with the economic variables. A variable for the home state of each presidential candidate is also included.

The strength of the Berry/Bickers approach is that with this extra detail, their equation correctly predicts all of presidential elections from 1980 to 2008. The weakness is that if you add enough variables and complexity, you can always create an equation that will match the past data, but your results can be quite sensitive to small tweaks in the variables that you use. Thus, it's hard to have confidence that a complex equation is will be an accurate predictor.  For what it's worth, their equation predicts that Romney will win the 2012 election rather comfortably, with more than 52% of the popular vote. As they point out: "What is striking about our state-level economic indicator forecast is the expectation that Obama will lose almost all of the states currently considered as swing states, including North Carolina, Virginia, New Hampshire, Colorado, Wisconsin, Minnesota, Pennsylvania, Ohio, and Florida."


In terms of narrowly economic influences on the presidential race, there are just two more monthly unemployment reports that will come out before the election in November. There won't be too much new economic data, either. Thus, my suspicion is that the ways in which economic outcomes affect presidential preferences are in large part already being taken into account in the presidential polls, which currently show a tight race.
Posted by Timothy Taylor at 6:00 AM