Most discussions of hyperinflation focus on a particular episode: for example, here's my post from last March 5 on "Hyperinflation and the Zimbabwe Example." But Steve H. Hanke and Nicholas Krus have taken the useful step of compiling a list of "World Hyperinflations" in an August 2012 Cato Working Paper.

Hanke and Krus define an episode of hyperinflation as starting when the rate of inflation exceeds 50% in a month, and ending after a year in which inflation rates do not exceed this level. But the task of compiling a systematic and well-documented list of hyperinflations is tricky. Data on prices can be scarce. While data on consumer prices is preferable, looking at data on wholesale prices or even exchange rates is sometimes necessary. As one example, the Republika Srpska is currently one of the two main parts of Bosnia and Herzegovina, which in turn was formed from the break-up of Yugoslavia. But for a time in the early 1990s, the Republic Srpska had its own currency circulating. Finding monthly price data for this currency is not a simple task! As another example, the city of Danzig in 1923 carried out its own currency reform: Danzig was at the time technically a free city, but heavily influenced by the German hyperinflation around it, in the midst of the overall German hyperinflation at that time.

Their paper offers a much fuller discussion of details and approaches, but here is a taste of their findings: a much-abbreviated version of their main table showing the top 25 hyperinflations, measured by whether the single highest monthly inflation rate exceeded 200%. 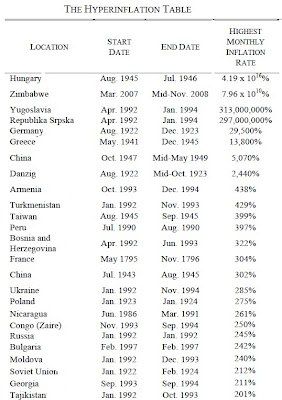 A few themes jump out at me:

4) Finally, Hanke and Krus state in a footnote that they would now make one addition to the table, which would be the most recent episode of all: the experience of North Korea from December 2009 to January 2011.