One striking feature of the Great Recession is that the unemployment rate for men spiked higher than that for women--but now has recovered to roughly the same rate. Here's an illustrative figure, courtesy of a chartbook published by the Stanford Institute for Economic Policy Research. 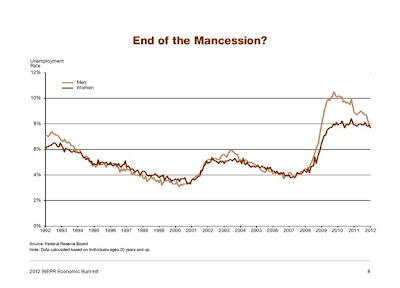 How unexpected is this pattern of "mancession" and "he-covery"? Although I wasn't expecting it, perhaps I should have been. Looking on the graph at the aftermath of the "jobless recoveries" that followed the 2001 and the 1990-91 recessions, in both cases the jobless rate spiked higher for men than for women. In the Summer 2012 issue of my own Journal of Economic Perspectives, Hilary Hoynes, Douglas L. Miller and Jessamyn Schaller investigate the question: "Who Suffers During Recessions?"(All articles in the JEP, from the current issue back to 1994, are freely available on-line courtesy of the American Economic Association. Starting this year, entire issues can also be downloaded in PDF, Kindle, or ePub formats.)

Here is the conclusion from Hoynes, Miller, and Schaller:

"The labor market effects of the Great Recession have not been not uniform across demographic groups. Men, blacks, Hispanics, youth, and those with lower education levels experience more employment declines and unemployment increases compared to women, whites, prime-aged workers, and those with high education levels. However, these dramatic differences in the cyclicality across demographic groups have been remarkably stable since at least the late 1970s and across recessionary periods versus expansionary periods. These gradients persist despite the dramatic changes in the labor market over the past 30 years, including the increase in labor force attachment for women, Hispanic immigration, the decline of manufacturing, and so on."

"The general tone of these findings might be surprising given much emphasis in the press on the “man-cession”—that is, the greater effect that the Great Recession has had on men ... Our analysis shows that men, across recessions and recoveries, experience more cyclical labor market outcomes. This is largely the result of the higher propensity of men to be employed in highly cyclical industries such as construction and manufacturing, while women are more likely to be employed in less-cyclical industries such as services and public administration. More generally, much of the difference in the cyclical effect across groups during the 2007 recession is explained by differing exposure to fluctuations due to the industries and occupations in which the groups are employed.

"Although overall the 2007–2009 recession appears similar to the 1980s recession, responsiveness by women’s employment and by that of the youngest and oldest workers was somewhat greater in the more recent recession. Further, we do find evidence of a “he-covery;” and the extent to which the current recovery is being experienced more by men than women (compared to the 1980s recovery) is largely due to a drop in women’s cyclicality during the current recovery."

"Despite these various distinctions, the overarching picture is one of stability in the demographic patterns of response to the business cycle over time. Who loses in the Great Recession? The same groups who lost in the recessions of the 1980s and who experience weaker labor market outcomes even in the good times. Viewed through the lens of these demographic patterns across labor markets, the Great Recession is different from business cycles over the three decades earlier in size and
length, but not in type."