A large proportion of academic research isn't about trying to resolve a big question once and for all. Instead, it's about putting together one brick of evidence, and when enough bricks accumulate, then it becomes possible to offer evidence-backed judgements on bigger questions.

In that spirit, Alberto Chong, Rafael La Porta, Florencio Lopez-de-Silanes, and Andrei Shleifer offer a study of "Letter Grading Government Efficiency" in an August 2012 working paper for the National Bureau of Economic Research. (NBER working papers are not freely available on-line, but many readers will have access through their academic institutions. Also, earlier copies of the paper are available on the web, like here.) Full disclosure: One of the authors of the paper, Andrei Shleifer, was the editor of my own Journal of Economic Perspectives, and thus my boss, from 2003 to 2008.

The notion is to measure one simple dimension of government efficiency: whether a letter sent to a real city with an actual zip code, but a nonexistent address, is returned to the sender. Thus, the authors sent 10 letters to nonexistent addresses in each of 159 countries: two letters to each of a country's five largest cities. The letters were all sent with a return address to the Tuck School of Business at Dartmouth University with a request to "return to the sender if undeliverable." A one-page letter requesting a response from the recipient was inside.

In theory, all countries belong to an international postal convention requiring them to return letters with an incorrect address, and to do so within about a month. Here's an overview of their results and a table: 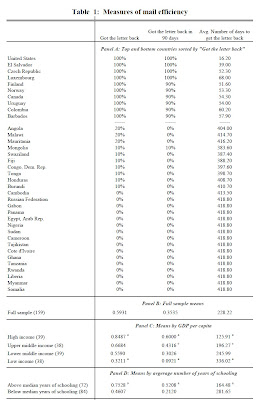 Not unexpectedly, the data shows that countries with higher per capita GDP or with higher average levels of education typically did better at returning misaddressed mail. The U.S. Postal Service is at the top of the list--but because the letters were mailed in the U.S. and being returned to a U.S. address, it would be quite troublesome if this were not true!

The authors can account for about half of the variation across countries by looking at factors like the types of machines used for reading postal codes, and whether the country uses a Latin alphabet (although the international postal conventions actually require that addresses be written in Latin letters). But more intriguingly, much of the variation across countries in whether they return misaddressed letters seems to be correlated with other measures of the quality of government and management in that country. In that sense, the ability to return misaddressed letters may well be a sort of simple diagnostic tool that suggests something about broader patterns of efficiency in government and the economy.
Posted by Timothy Taylor at 6:00 AM