The Rise of Residential Segregation by Income

I've posted in the past about "The Big Decline in Housing Segregation" by race, but it seems likely that another kind of residential segregation is on the rise. In a report for the Pew Research Center, Paul Taylor (no relation) and Richard Fry discuss "The Rise of Residential Segregation by Income Social & Demographic Trends."

To measure the extent to which households are segregated by income, the authors take three steps. First, they look at the 30 U.S. cities with the largest number of households. Second, they categorized households by income as lower, middle, or upper income. "For the purpose of this analysis, low-income households are defined as having less than two-thirds of the national median annual income and upper-income households as having more than double the national median annual income. Using these thresholds, it took an annual household income of less than $34,000 in 2010 to be labeled low income and $104,000 or above to be labeled upper income. The Center conducted multiple analyses using different thresholds to define lower- and upper-income households. The basic finding reported here of increased residential segregation by income was consistent regardless of which thresholds were used." Third, they look at where households are living by Census tract: "The nation’s 73,000 census tracts are the best statistical proxy available from the Census Bureau to define neighborhoods. The typical census tract has about 4,200 residents. In a sparsely populated rural area, a tract might cover many square miles; in a densely populated urban area, it might cover just a city block or two. But these are outliers. As a general rule, a census tract conforms to what people typically think of as a neighborhood." 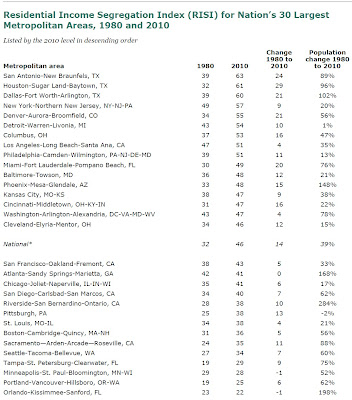 Overall, the national index rose from 32 in 1980 to 46 in 2010. The report does not seek to analyze the differences across cities, which are presumably influenced by a range of local factors. At the regional level, "one finds that the metro areas in the Southwest have the highest average RISI score (57), followed by those in the Northeast (48), Midwest (44), West (38) and Southeast (35). The analysis also shows that the level of residential segregation by income in the big Southwestern metro areas have, on average, increased much more rapidly from 1980 to 2010 than have those in other parts of the country. But all regions have had some increase."

At a broad level, the main reason for the rise in segregation by income is the rising inequality of incomes in the U.S. The authors write:


"[T]here has been shrinkage over time in the share of households in the U.S. that have an annual income that falls within 67% to 200% of the national median, which are the boundaries used in this report to define middle-income households. In 1980, 54% of the nation’s households fell within this statistically defined middle; by 2010, just 48% did. The decline in the share of middle-income households is largely accounted for by an increase in the share of upper-income households. ... With fewer households now in the middle income group, it’s not surprising that there are now also more census tracts in which at least half of the households are either upper income or lower income. In 2010, 24% of all census tracts fell into one category or the other—with 18% in the majority lower-income category and 6% in the majority upper-income category. Back in 1980, 15% of all census tracts fell into one category or the other—with 12% majority lower and 3% majority upper. To be sure, even with these increases over time in the shares of tracts that have a high concentration of households at one end of the income scale or the other, the vast majority of tracts in the country—76%—do not fit this profile. Most of America’s neighborhoods are still mostly middle income or mixed income—just not as many as before."