Twice each year, the Congressional Budget Office publishes a "Budget and Economic Outlook" for the next 10 years. The just-released August version offers a timeline for the eventual recovery of the U.S. economy to its pre-recession path of economic growth, and some worries about the budget fights that are scheduled to erupt later this year.

On the subject of eventual full recovery, the CBO regularly estimates the "potential GDP" of the U.S. economy: that is, what the U.S. economy would produce if unemployment was down to a steady-state level of about 5.5% and steady growth was occurring. During recessions, of course, the economy produces below its potential GDP. During booms (like the end of the dot-com period in the early 2000s and the top of the housing price bubble in about 2005-2006), it's possible for an economy to produce more than its potential GDP, but only for a short-term and unsustainable period. Here's the CBO graph comparing actual and potential GDP since 2000. The shallowness of how much the recession in 2001 caused actual GDP to fall below potential, compared to the depth and length of how much actual GDP has fallen below potential in the aftermath of the Great Recession, is especially striking. 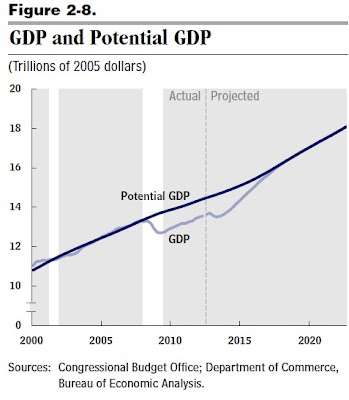 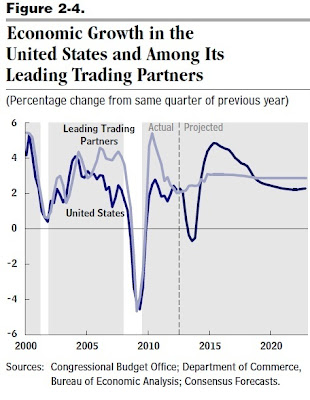 However, the eagle-eyed reader will note that these growth predictions from the CBO also show a period of negative growth--that is, a recession--in the near future. Similarly, the earlier figure showing a gap between actual and potential GDP shows that gap widening in the near future, before it starts to close. Why? The CBO is required by law to make baseline projections that reflect the laws that are actually on the books. And currently, "sharp increases in federal taxes and reductions in federal spending that are scheduled under current law to begin in calendar year 2013 are likely to
interrupt the recent economic progress. ... The increases in federal taxes and reductions in federal
spending, totaling almost $500 billion, that are projected to occur in fiscal year 2013 represent an amount of deficit reduction over the course of a single year that has not occurred (as a share of GDP) since 1969." These changes mean that the baseline CBO projection is for a recession in 2013.

The currently changes in taxes and spending can be changed, of course, and along with its baseline estimate, the CBO estimate an alternative scenario for comparison. "Of course, the tax and spending policies that are scheduled to take effect under current law may be delayed or modified. To illustrate how some changes to current law would affect the economy over the next decade, CBO analyzed an alternative fiscal scenario that would maintain many policies that have been in place for several
years. Specifically, that scenario incorporates the assumptions that all expiring tax provisions (other than the payroll tax reduction) are extended indefinitely; the alternative minimum tax is indexed for inflation after 2011; Medicare’s payment rates for physicians’ services are held constant at their current level; and the automatic spending reductions required by the Budget Control Act of
2011 (Public Law 112-25) do not occur (although the original caps on discretionary appropriations remain in place) ..."

Other scenarios are possible, of course. But several points seem worth making.

The CBO alternative scenario does not predict a recession in the short-term, and it predicts higher growth in the next few years. But the alternative scenario also means that the budget deficits are reduced by less, which means that growth slows down. The CBO prediction is that by 2022, the U.S. economy would be larger under the baseline scenario--with a recession in 2013--than it would be with the alternative scenario. This is a standard tradeoff in thinking about budget deficits: in the short run, spending cuts and tax increases are always unattractive, but unless a government figures out a way to reduce outsized deficits, long-run economic growth will be hindered.

The obvious policy conclusion here, it seems to me, is that having all the scheduled changes to taxes and spending hit in 2013 is too much of a burden for an already-struggling U.S. economy, and should be avoided. But it remains tremendously important to get the U.S. budget deficits headed in a downward direction in the medium-term, certainly before the 10-year horizon of these predictions.

Moreover, it would be useful for the U.S. economy, in the sense of reducing uncertainty, if the political system would stop gaming the budget process. That is, stop the ongoing cycle of having taxes that are scheduled to rise in a few years, or spending that it scheduled to be cut in a few years. Sure, writing down projections that show higher taxes or lower spending in a few years makes the 10-year deficit projections look better, but it also leads to waves of uncertainty cascading through the economy as these policies perpetually are hitting their expiration dates.
Posted by Timothy Taylor at 6:00 AM