To hear the candidates and the media tell it, every presidential election year has greater historical importance and is more frenzied and intense than any previous election. But the share of U.S. adults who actually vote has been voter turnout has mostly been trending down over time. Here's are some basic facts from a chartbook put together by the Stanford Institute for Economic Policy Research. 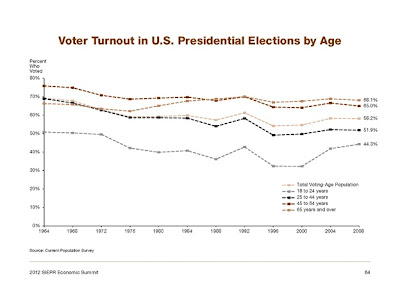 I see the chart as a reminder of a basic truth: Elections aren't decided by what people say to pollsters. They are determined by who actually casts a vote.