Everyone knows that the future of the world economy will be heavily influenced by the development of new technology. Everyone is right! But the U.S. research and development effort has largely been stagnant in recent decades, with a gradual reduction in the importance of government support for R&D. Meanwhile, countries like China and South Korea are greatly expanding their R&D efforts. The facts are laid out in Chapter 4 of a biennial report from the National Science Foundation called
Science and Engineering Indicators 2012.  Here are some points that caught my eye.

Total R&D spending as a share of GDP has been more-or-less flat in the U.S. over the last few decades at about 2.7% of GDP. However, the share of R&D spending from the federal government has been dropping steadily, while the share from business has been rising steadily. The report explains: "The federal government was once the predominant sponsor of the nation’s R&D, funding some 67% of all U.S. R&D in 1964 ...  But the federal share decreased in subsequent
years to less than half in 1979 and to a low of 25% in 2000. Changing business conditions and expanded federal funding of health, defense, and counterterrorism R&D pushed it back up above 30% in 2009." 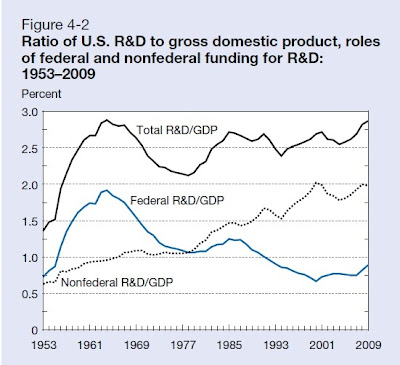 Business now dominates U.S. R&D both in terms of providing the funding and in terms of being the location where the research is actually done. Not surprisingly, the biggest category of R&D is not the basic research that seeks fundamental scientific breakthroughs, nor the applied research that looks for applications of those breakthroughs, but the experimental development of new products, which accounts for about 60% of total U.S. R&D spending. Here are the activities on which U.S. companies spend R&D dollars: the top single category by far is pharmaceutical and medicinal products, followed by software and semiconductors and other electronic components.

U.S. government spending on R&D has tilted more to defense-related than to non-defense products in recent decades. Among non-defense R&D, health-related research is far and away the leader. 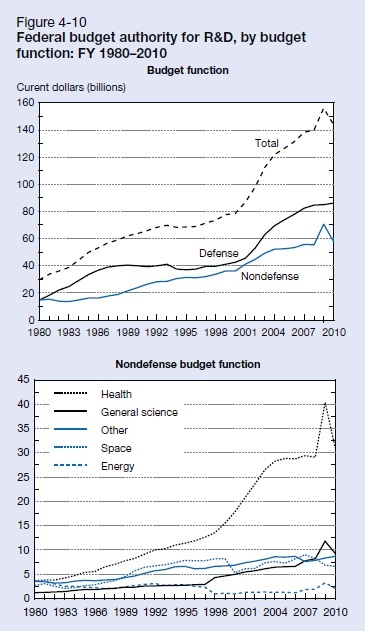 The enormous U.S. economy remains the single largest spender on R&D in the world in absolute dollars, substantially outstripping the European Union and Japan. But notice that R&D spending in China is rising fast, and recently outstripped R&D spending in Japan. 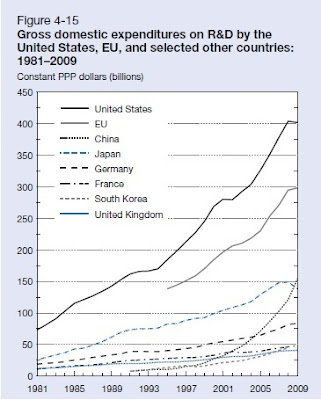 In terms of the share of GDP spent on R&D, the U.S. is mid-range. Also, notice that R&D spending as a share of GDP is rising in Japan, and rising rapidly in China and in South Korea. 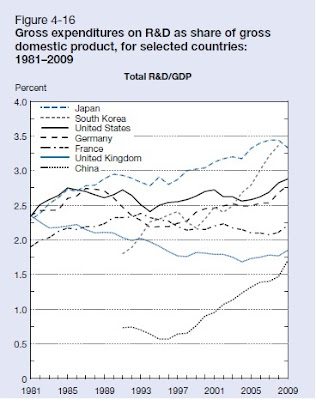 I have long found it frustrating that the U.S. government seems unable to prioritize greater R&D spending. Total U.S. R&D spending in 2009 was about $400 billion, with $124 billion coming from the federal government. Total federal spending in 2009 was about $3.1 trillion, so about 4% of the federal budget went to R&D. I believe that the budget deficit is a big problem. But I find it depressing to contemplate that the federal government can't commit, say, 5% of its spending to R&D instead of 4%. Most businesses will tend to focus most of their R&D on projects that could lead to new products in the fairly near term. Government should be supporting the research that has a possibility, over time, of creating whole new industries.