Entitlements, Public Investment, and the Changing Nature of the U.S. Government

The nature of what the federal government does is shifting over time, away from providing goods and services to the public and toward becoming a conduit for payments to households. Jessica Perez, Gabe Horwitz, and David Kendall summarize some trends in a report for a Democrat-leaning think tank called Third Way. They write: "Entitlements are squeezing out public investments. In 1962, spending on investments was two and a half times that of entitlements. But today, as a result of this Great Inversion, entitlement spending is three times that of investments. And this trend will only accelerate in time as the Baby Boomers retire and their benefits grow faster than inflation and wages." 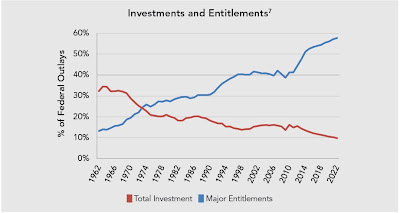 What exactly is included in these categories? It takes a quick skip and a hop through federal budget documents to find out.

In the proposed Budget of the United States for FY2013 from the Office of Management and Budget, Table 8.5 in the Historical Tables summarizes "mandatory spending." This category totaled about $2 trillion in 2011. Of that total, about three-quarters was payments from Social Security ($725 billion), Medicare ($480 billion) and Medicaid ($275 billion). Other big categories include payments to federal retirees ($124 billion), unemployment insurance ($117 billion) and food and nutrition assistance ($96 billion).

For an overview of "Federal Investment," the useful starting point is Chapter 21 with that title in the
Analytical Perspectives volume of the federal budget. It defines federal investment broadly:

"Federal investment is the portion of Federal spending intended to yield long-term benefits for the economy and the country. It promotes improved efficiency within Federal agencies, as well as growth in the national economy by increasing the overall stock of capital. Investment spending can take the form of direct Federal spending or of grants to State and local governments. It can be designated for physical capital, which creates a tangible asset that yields a stream of services over a period of years. It also can be for research and development, education, or training, all of which are intangible but still increase income in the future or provide other long-term benefits."

Along with annual spending numbers, the chapter makes an interesting attempt to estimate the total value of the accumulated stock of federal investment in several areas. For example, it estimates the total stock of federally financed physical capital in 2011 was worth $3,054 billion, of which a bit under  one-third ($925 billion) is national defense, almost exactly one-third is transportation $1,017 billion), and the rest is for water and power, natural resources, community and regional resources, and "other."

Finally, the stock of federally financed education capital is given as a shade over $2 trillion in 2011, of which three-quarters is the total value of federally-financed elementary and secondary education, and the rest is fedearally-financed higher education.