Are U.S. Banks Vulnerable to a European Meltdown?

The Federal Reserve conducts a Senior Loan Office Opinion Survey on Bank Lending Practices each quarter at about 60 large U.S. banks. The results of the October 2011 survey, released last week, suggest that these banks do not see themselves as facing a high exposure to risks of a European financial and economic meltdown.

Here are a couple of sample questions from the survey. The first question shows that of senior loan officers at 50 banks who answered the question, 36 say that less than 5% of their outstanding commercial and industrial loans are to nonfinancial companies with operations in the U.S. that have significant exposure to European economies. The second questions shows that out of 49 banks, 24 don't have any outstanding loans to European banks, and 17 of the 25 banks that do have such loans have tightened their lending standards somewhat or considerably in the last three months. 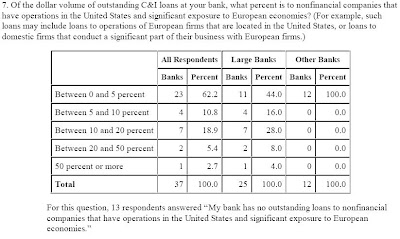 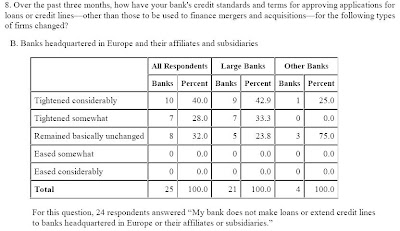 Of course, a European economic and financial meltdown could affect the U.S. economy in a number of ways: for example, by reducing U.S. exports to European markets, or by affecting nonbank financial institutions like money market funds, hedge funds or dealer-brokers. But banks, because they hold federally insured deposits, are more likely to be bailed out by taxpayers if they get into trouble. So it's good news (if it indeed turns out to be true!) that major U.S. banks don't have high exposure either to firms doing business in Europe or to European banks.