Michael Anderson and Maximilian Auffhammer from UC-Berkeley point out in NBER Working Paper #17170 released last June: "The average weight of light vehicles sold in the United States has fluctuated substantially over the past 35 years. From 1975 to 1980, average weight dropped almost 1,000 pounds (from 4,060 pounds to 3,228 pounds), likely in response to rising gasoline prices and the passage of the Corporate Average Fuel Efficiency (CAFE) standard. As gasoline prices fell in the late-1980s, however, average vehicle weight began to rise, and by 2005 it had attained 1975 levels ..."

The trend is clearly visible in one of the annual reports from the EPA: Light-Duty Automotive Technology, Carbon Dioxide Emissions, and Fuel Economy Trends: 1975 Through 2010.
Notice that as the weight of cars increased for most of the last 30 years, horsepower and acceleration have also risen--although all three of these trends have been disrupted by the higher gasoline prices in the last couple of years. 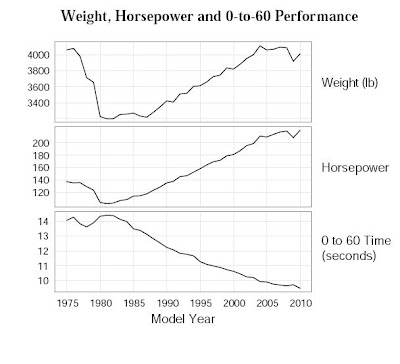 The trend toward heavier cars has two tradeoffs I'll mention here: 1) improvements in car technology have all been going to horsepower and acceleration, instead of improved miles-per-gallon; and 2) heavier cars are more likely to lead to deaths when accidents occur.


Christopher R. Knittel of MIT has examined what could have happened if technological progress in the auto industry had been focused on improved miles-per-gallon. He writes: "This paper estimates the technological progress that has occurred since 1980 in the automobile industry and the trade-offs faced when choosing between fuel economy, weight, and engine power characteristics. The results suggest that if weight, horsepower, and torque were held at their 1980 levels, fuel economy could have increased by nearly 60 percent from 1980 to 2006. (Knittel's paper is called "Automobiles on Steroids: Product Attribute Trade-Offs and Technological Progress in the Automobile Sector." The paper is forthcoming in the American Economic Review: in the meantime, a PDF version is available at Knittel's website here.) Here's a figure from the EPA report showing the lack of progress in miles-per-gallon over most of the last three decades. 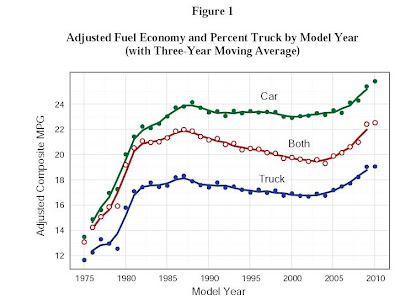 The authors write: "We present robust evidence that increasing striking vehicle weight by 1,000 pounds increases the probability of a fatality in the struck vehicle by 40% to 50%. This finding is unchanged across different specifications, estimation methods, and different subsets of the sample. We show that there are also significant impacts on serious injuries." They find that when heavier vehicles collide with each other, the fatality rate is not higher. But when heavier vehicles collide with lighter vehicles, motorcycles, or pedestrians, the death rate is higher. They estimate the cost of increased fatalities alone--that is, not counting the costs of more serious injuries--at $93 billion per year.

Many U.S. consumers have clearly demonstrated their preference over the last three decades for heavier cars with more horsepower and acceleration. For at least some consumers, a larger car is a choice made in self-defense, given the dangers posed by a collision with all the other large cars on the roads. But while owners of large cars are engaging in their version of an arms race, the rest of us face greater risks of injury and death in an accident. In Knittel's paper, he points out that the Obama administration has been seeking to raise the average miles-per-gallon standard to 35.5 mpg by 2016. Knittel argues that the only way to accomplish this goal will be for the average car to get lighter--which should also save some lives.