Long-Term Care Insurance in the U.S.

The health care reform bill signed into law by President Obama in 2010 included the Community Living Assistance Services and Supports (CLASS) Act, under which the federal government was going to sell long-term care insurance policies directly to the public. However, the law also included a provision that before the program got underway, it had to be certified to be actuarially sound over the long term. On October 14, 2011, the Department of Health and Human Services announced that it could not make such a certification, and thus was going to end the implementation of the program. 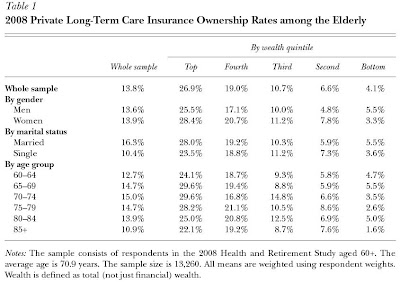 Long-term care insurance policies with only moderately decent coverage can still be quite expensive. Brown and Finkelstein look at annual premiums for kinds of long-term care insurance policies as of mid-2010: "These policies all cover institutional and home care, and have a maximum daily benefit amount of $150. They differ in their deductible (60 day or 30 day), their benefit period (four year or unlimited), and whether or not the daily benefit is constant in nominal terms or escalates at 5 percent per year (compounded)." For the record, average nursing home costs are already above $200/day, so this insurance would cover only part of future costs.

Moreover, the idea of load can be extended to take into account that many people take out a long-term care policy, but at some point stop paying the premiums--and as a result get little or nothing in benefits. The first column shows loads assuming that people keep their policies; the second policy shows the load with this "lapsation" and policy termination taken into account.

Long-term care insurance requires a very long-term contract, which raises problems of its own. Brown and Finkelstein write: "First, the organization and delivery of long-term care is likely to change over the decades, so it is uncertain whether the policy bought today will cover what the consumer wants out of the choices available in 40 years. Second, why start paying premiums now when there is some chance that by the time long-term care is needed in several decades, the public sector may have substantially expanded its insurance coverage? A third concern is about counterparty risk. While insurance companies are good at pooling and hence insuring idiosyncratic risk, they may be less able to hedge the aggregate risks of rising long-term care utilization or long-term care costs over decades. In turn, potential buyers of such insurance may be discouraged by the risk of future premium increases and/or insurance company insolvency."


Long-term care insurance faces the tough problem that it has to compete with Medicaid, which pays for long-term care if you run down your assets. There's no easy way out of this trap. If Medicare didn't cover long-term care insurance, then politicians would face the catastrophe of potentially turning the elderly and infirm poor into the streets. If Medicaid was redesigned to cover long-term care insurance without requiring that you run down your assets first, it would encourage saving--but also cost considerably more. As Brown and Finkelstein write: "Attempts to reduce the implicit tax and stimulate private insurance markets tend to have at least one of two undesirable consequences: either they increase public expenditures, for example, by making Medicaid a primary payer and reducing means testing; or they require that policymakers be willing to deny care to individuals who fail to insure themselves adequately."

We know that demand for long-term care is going to expand dramatically as the U.S. population ages. We know that it is less expensive and probably better for the elderly if such care can be provided, at least for many of the elderly, through supportive home care rather than institutionalization. We know that requiring the elderly to become impoverished before being eligible for public assistance in long-term care seems a peculiar and counterproductive way to proceed. We know that private markets for long-term care insurance aren't working especially well. The CLASS legislation in the 2010 health care reform bill wasn't the answer. It made utterly unrealistic promises about costs and benefits, and the government was right to pull the plug on it. But the problem of how to provide and finance long-term care isn't going away.

Here is a post from August 2011 looking at Long-Term Care in an International Perspective.

are eventually going to run down your assets and end up on Medicare anyway, then purchasing such insurance doesn't seem attractive.