When it comes to Big Oil, I run into a lot of people who are still living in the 1960s. They still think that Exxon and Mobil and Shell and BP and a few others dominate world oil markets. The October 29 issue of the Economist has a nice article ("Big Oil’s bigger brothers"), which puts the modern reality of Big Oil in context.


When it comes to reserves, the big country-owned firms control 80% of the world's oil, while the private oil companies are bit players. 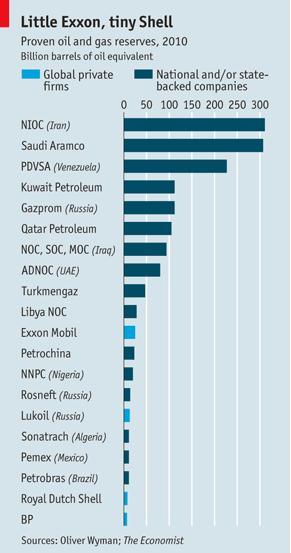 ExxonMobil, Shell and BP do continue to have enormous expertise in getting to hard-to-reach oil. When world oil prices are high, and this costly technology gets put to work, they can make high profits. But their technological leadership is under continual challenge  both from the state-owned oil companies and from small technology-intensive private firms--often working together. Moreover, Big Oil is very vulnerable to a drop in oil prices. As the Economist writes:


"Life is getting harder for the supermajors. Their edge over their rivals—the ability to extract oil from difficult places—is terrifically useful while prices are high. But since it is terrifically costly to extract oil from difficult places, their competitive advantage fizzles if oil prices fall. If it does, their bumper profits could vanish like a pool of petrol into which a lighted match has been carelessly dropped."