Turkey Demand and Supply, and the Thanksgiving Dinner Price Index

(Originally appeared on Monday, 11/21. Bumped to today for your Thanksgiving entertainment.)

On the demand side, the quantity of turkey consumed rose dramatically from the mid-1970s to the mid-1990s, but since then has declined somewhat. The figure below is from the USDA study, but more recent data from the Eatturkey.com website run by the National Turkey Federation report that U.S. producers raised 244 million turkeys in 2010, so the decline has continued in the last few years. Apparently, he Classic Thanksgiving Dinner is becoming slightly less widespread. 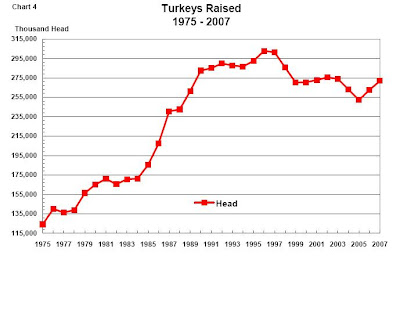 U.S. agriculture is full of these kinds of examples of remarkable increases in yields over a few decades, but they always drop my jaw. I tend to think of a "turkey" as a product that doesn't have a lot of opportunity for technological development, but clearly I'm wrong. Here's a graph showing the rise in size of turkeys over time.

The production of turkey remains an industry that is not very concentrated, with three relatively large producers and then more than a dozen mid-sized producers. Here's a list of top turkey producers in 2010 from the National Turkey Federation: 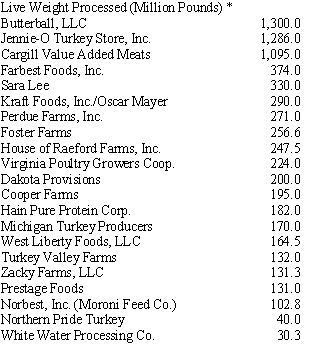 Anyway, the starting point for measuring inflation is to define a relevant "basket" or group of goods, and then to track how the price of this basket of goods changes over time. When the Bureau of Labor Statistics measures the Consumer Price Index, the basket of goods is defined as what a typical U.S. household buys. But one can also define a more specific basket of goods if desired, and for 26 years, the American Farm Bureau Federation has been using more than 100 shoppers in states across the country to estimate the cost of purchasing a Thanksgiving dinner. The basket of goods for their Classic Thanksgiving Dinner Price Index looks like this: 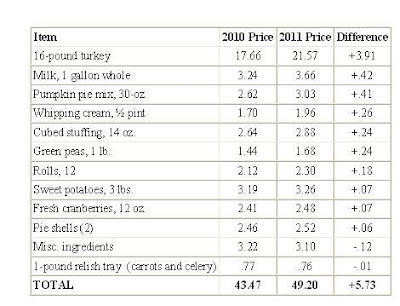 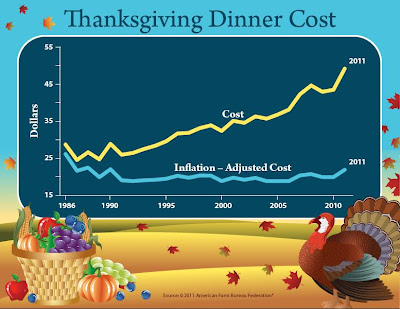