This is the second of three posts on the recent Congressional Budget Office Report "Trends in the Distribution of Household Income Between 1979 and 2007."  The first post on Incomes of the Top 1% is here, while the third explains the concepts of the Lorenz Curve and the Gini Coefficient.

The federal government can redistribute income in two ways: by taking those with high incomes relatively more, and by making transfer payments to those with lower income. Using the Gini index (explained in the third post in this grouping) as a measure of inequality, CBO reports: "The dispersion of after-tax income in 2007 is about four-fifths as large as the dispersion of market income. Roughly 60 percent of the difference in dispersion between market income and after-tax income is attributable to transfers and roughly 40 percent is attributable to federal taxes.The redistributive effect of transfers and federal taxes was smaller in 2007 than in 1979 ..."

Here are three figures showing average federal tax rates paid by the top 1% of the income distribution in each year from 1979 to 2007, by the 81st to 99th percentiles, the 21st to 80th percentiles, and the lowest 20%. The first graph shows average payments as a share of income for individual income tax, the second shows payroll taxes, and the third shows all federal taxes combined. Here are a few patterns that jump out.

These sorts of graphs always turn my mind to Warren Buffett, and his claim that he pays less in taxes than his secretaries. For example, see Buffett's August 14 article, "Stop Coddling the Super-Rich," in the New York Times, where he writes: "Last year my federal tax bill — the income tax I paid, as well as payroll taxes paid by me and on my behalf — was $6,938,744. That sounds like a lot of money. But what I paid was only 17.4 percent of my taxable income — and that’s actually a lower percentage than was paid by any of the other 20 people in our office. Their tax burdens ranged from 33 percent to 41 percent and averaged 36 percent."
What Buffett pays as a share of income sounds plausible to me: he is well-known for taking a fairly small annual salary and then receiving most of his income in the form of gains from his investments. Because many of the investments have been held for long periods of time, they are subject to a lower capital gains tax rate. But the tax burdens that Buffett claims for his staff look unrealistically high. Let's say his office staff are in the 81st-99th percentiles of the income distribution. Average tax rates for that group are in the range of 22-23% in recent years. Buffett's staff might face a marginal tax rate might be 36% or 41%, depending on rules bout phase-outs of deductions and the like. But if Buffett's staff really are paying an average federal tax rate of 36% as a share of total income, they need access to better accountants or tax lawyer.

Federal government transfer payments are about 10-12% of household market income from 1979 to 2007. Spending in this category is heavily driven by Social Security and Medicare. In recent years, about half of federal transfer spending is Social Security. A third is health-related programs like Medicare and Medicaid. The rest is programs like unemployment insurance and welfare.

Summing up the redistribution by federal taxes and transfers
Here's a final figure showing how federal transfers and taxes affect income inequality, which is measured by the percent amount that these policies reduce the Gini index of inequality. The extent to which these policies reduce income inequality dropped in the 1980s, rose in the early 1990s, dropped in the late 1990s, rose in the early 2000s and has fallen since then. Interestingly, the diminished effect of federal redistribution since the mid-1990s is, by this measure, much more traceable to the changes in transfer payments than to the changes in progressivity of taxes. 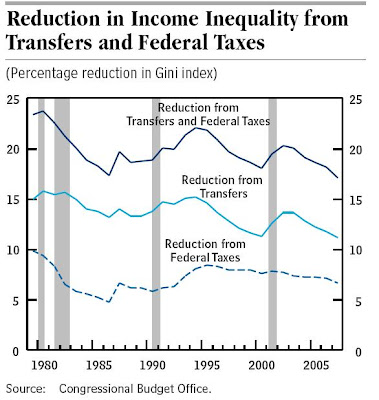