One of many groups of financial institutions that were thoroughly embarrassed by the financial crisis were the big credit rating agencies, like Standard &  Poors, Moody's and Fitch. They had rated some of the financial securities that were based on pooling together subprime mortgages as AAA safe, which is what made it legally OK for banks to hold such securities, thus creating a situation where popping the bubble in housing prices caused banks to suffer severe losses. For some history on how the U.S. government financial regulators outsourced their judgment on riskiness of financial securities to the credit rating agencies, see my post from last August: "Where Did S&P Get Its Power? The Federal Government (Of Course)."

Nicolas Véron discusses "What Can and Cannot Be Done About Credit Rating Agencies" in a Policy Brief written for the Peterson Institute of International Economics. Here are some highlights (citations and footnotes omitted):

Credit rating agencies (CRAs) have some successes, and some very prominent failures.

"From this standpoint there was a clear failure of CRAs when it came to US mortgage-based structured products in the mid-2000s. Many mortgage-based securities were highly rated but had to be downgraded in large numbers following the housing market downturn in 2006–07, especially in
the subprime segment. Subsequent enquiries, in particular the Securities and Exchange Commission and Financial Crisis Inquiry Commission, have convincingly linked the CRAs’ failure to a quest for market share in a rapidly growing and highly profitable market segment. Under commercial pressure, CRAs failed to devote sufficient time and resources to the analysis of individual transactions, and also neglected to back single transaction assessments with top-down macroeconomic analysis that could have alerted them to the possibility of a US nationwide property market downturn. ...

"[T]here have been several past cases in which rating agencies clearly failed to spot deteriorations of sovereign or corporate creditworthiness in due time. This was particularly true of Lehman, AIG, and Washington Mutual, which kept investment-grade credit ratings until September 15, 2008. CRAs were similarly criticized for their failure to anticipate the Asian crisis of 1997–98 or the Enron bankruptcy in  late 2001. It appears fair to conclude that all three main CRAs have a decent though far from spotless record in sovereign and corporate ratings, but that their hardly excusable failure on
rating US residential mortgage-based securities in the mid- 2000s has lastingly damaged their brands and reputations."

Credit rating agencies typically follow the market, rather than leading it.

"Since the beginning of the crisis, CRAs have frequently been accused of timing their downgrades badly and of precipitating sudden negative shifts in investor consensus. However, it is infrequent that rating downgrades surprise markets—generally they follow degradations of market sentiment rather than precede it. When CRAs do anticipate, they are often not given much attention by investors, such as when S&P started downgrading Greece in 2004."

The most useful reforms of credit rating agencies may focus on those issuing the securities in the first place.

Véron offers an exceptionally level-headed discussion of what might be done about the credit rating agencies. For example, one could forbid such ratings, either in general or when markets are turbulent, but along with the issues of suppressing freedom of speech, it's hard to see how suppressing information is workable or would help to calm a panic. Some in Europe have suggested the creation of a new non-profit quasi-governmental credit rating agency. But could it have any legitimacy among investors? There have been calls to regulate specifically how credit ratings are done. But the difficulty here is that the credit rating agencies did not know how to rate certain financial securities, and it's not clear that government regulators knew any more. If anything, we need more innovative and insightful measures of credit risk to be created, not for certain methods to be set in concrete. Also, tighter regulation probably would make it more costly and thus unlikely for any firms seeking to enter this market.

Thus, Veron emphasizes that it may be most useful to require those issuing securities, and asking to have them rated, "to disclose more standardized and audited information about their risk factors and financial exposures." This new regulatory rule would apply to ratings for corporate bond issues, for financial securities being rated, and also for sovereign debt being rated. Credit rating agencies could be required to conduct their ratings with whatever methods they choose--but based only on the publicly available information. He concludes:

"To put it in a simplistic but concise way, what is needed is “a John Moody for the 21st century.” CRAs themselves can perhaps be somewhat improved by adequate regulation and supervision, but public policy initiatives that focus only on CRAs are unlikely to adequately address the need for substantially better financial risk assessments. If real progress is to be made towards a better public understanding of financial risks, it will have to involve innovative approaches that even well-regulated
CRAs, on the basis of recent experience, may not be the best placed to deliver."

Finally, here's a useful table showing the dominance of S&P, Moody's and Fitch in the market for credit rating services. 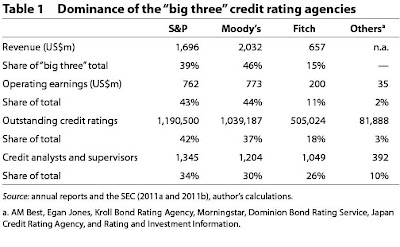