The Bureau of Labor Statistics has just put out its "Job Openings and Labor Turnover Survey Highlights" with data up through September 2011--and lots of nice graphs and explanations. The 2010 Nobel Prize in Economics went toPeter A. Diamond, Dale T. Mortensen, Christopher A. Pissarides "for their analysis of markets with search frictions." Their work is a reminder that unemployment is not just about a shortfall in demand, but is also a matter of search and matching by potential workers and employers. The JOLTS data offers the factual background on job openings, separations, hires, and more. The overall picture is of an unpleasantly stagnant labor market.


As a starting point, look at the relationship between hires, separations, and employment. Most of the time, the red line showing job separations and the blue line showing hires are pretty close together, with one just a bit over the other. When separations exceed hires for some months running in the early 2000s, total employment declines. Then hires exceed separations by a bit, month by month, and total employment grows. During the Great Recession, hiring drops off a cliff and separations fall sharply as well (more on that in a second). Total employment has rebounded a bit since late 2009, but it's interesting to note that the levels of hires and separations remain so low. Those with jobs are tending to stay in them; those without jobs aren't getting hired at a rapid rate. 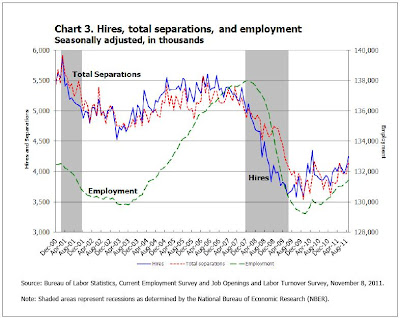 What explains why job separations would fall during the Great Recession? After all, don't more people lose their jobs in a recession? Yes, but the category of "job separations" has two parts: voluntary quits and layoffs/discharges. During the recession, layoffs and discharges do rise sharply as shown by the red line, but quits fall even faster as shown by the blue line, as those with jobs hung on to them. Overall, job separations decreased. Notice that in the last year or so, layoffs and discharges have actually been relatively low compared to the pre-recession years in the mid-2000s. Quits have stayed lower, too. 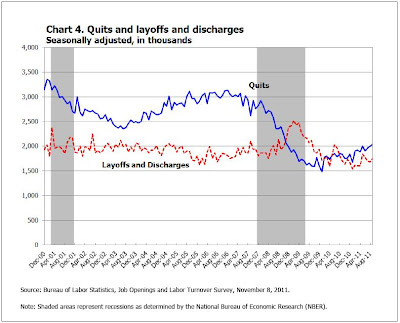 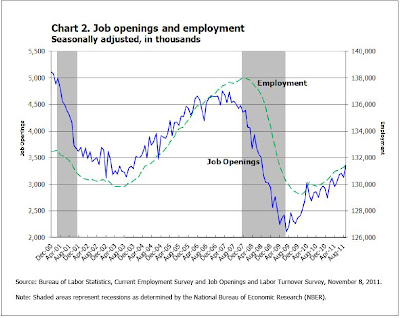 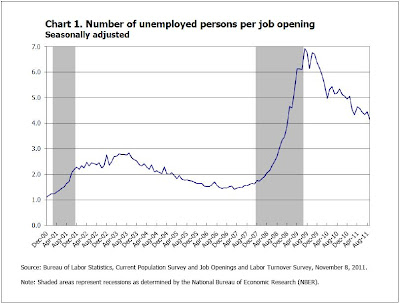 A final figure from this data is called the Beveridge curve. BLS explains: "This graphical representation of the relationship between the unemployment rate and the vacancy rate is known as the Beveridge Curve, named after the British economist William Henry Beveridge (1879-1963). The economy’s position on the downward sloping Beveridge Curve reflects the state of the business cycle. During an expansion, the unemployment rate is low and the vacancy rate is high. During a contraction, the unemployment rate is high and the vacancy rate is low." The figure is usefully colored in time segments, so the period before the 2001 recession is in light blue in the upper left corner; the 2001 recession is the darker blue line t; the period of growth in the mid-2000s is the red line; the Great Recession is the green line; and the period since the recession is the purple line at the bottom right. The severity of the Great Recession is apparent as the green line stretches down to the right, with much higher unemployment and lower rates of job openings than the 2001 recession. 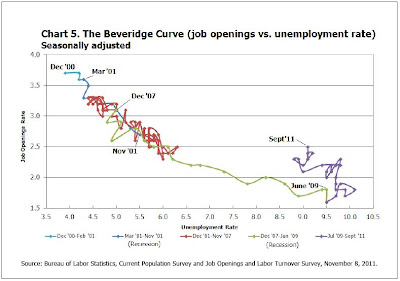 But the Beveridge curve also raises an interesting question: Is the economy getting worse at matching people with jobs? The low levels of  hiring and separations suggest a stagnant labor market. The Beveridge curve might be another signal. As BLS explains: "The position of the curve is determined by the efficiency of the labor market. For example, a greater mismatch between available jobs and the unemployed in terms of skills or location would cause the curve to shift outward, up and toward the right." Notice that as the number of job vacancies has increased, the unemployment rate hasn't fallen as quickly as one might expect. To put it another way, the purple line is not retracing its way back up the green line of the Great Recession, but instead is above it and to the right.

Of course, relationships in the economy aren't going to be as precise as, say, the relationship between altitude and air pressure. There isn't yet enough data to prove whether the Beveridge curve has in fact shifted out. But if it has indeed become harder in the U.S. economy to match unemployed workers with job openings--perhaps because the skills that employers are searching for are not the same as the skills that the unemployed have to offer?--then it will be even harder to bring down the unemployment rate.