China: Does 8% Growth Cause Less Satisfaction?

China's economy grew at extraordinary annual rates of 8% or more, on a per capita basis, in the two decades from 1990 to 2009. Using the old "rule of 72" that is sometimes taught to approximate the effect of growth rates, take 72, divide by the annual growth rate, and it will tell you (roughly) how many years it takes for the original quantity to double. So at an 8% growth rate, China's per capita GDP doubles in 9 years, and quadruples in 18 years. In the two decades from 1990-2009, average per person GDP in China has quadrupled, at least. The number of Chinese living below the international poverty line of $1.25 in consumption per day fell by 662 million from the early 1980s up to 2008, according to World Bank estimates.

But survey researchers as people in China (and all over the world): "All things considered, how satisfied are you with your life as a whole these  days? Please use this card to help with your answer:
1 “dissatisfied” 2 3 4 5 6 7 8 9 10 “satisfied”."
These researchers find that people in China are not, on average, more satisfied in 2009 than in 1990. How can this be?

This finding is an example of the "Easterlin paradox." Back in 1974, Richard Easterlin wrote a paper called A. (1974) "Does Economic Growth Improve the Human Lot?" which appeared in a conference volume (Nations and Households in Economic Growth: Essays in Honor of Moses Abramovitz, edited by Paul A. David and Melvin W. Reder). The paper is available here.  Easterlin found that in a given society, those with more income tended to report higher happiness or satisfaction than those with less income. However, he also found that the average level of happiness or satisfaction on a 10-point scale didn't seem to rise over time as an economy grew: for example, in the U.S. economy between 1946 and 1970. He argued: "The increase in output itself makes for an escalation in human aspirations, and thus negates the expected positive impact on welfare."

But can this effect hold true even when the standard of living is rising as dramatically as in China?  Easterlin, still going strong at USC, looks at the data with co-authors Robson Morgan, Malgorzata Switek, and Fei Wang in "China's life satisfaction, 1990-2010," just published in the Proceedings of the National Academy of Sciences.  Here is a (slightly messy) graph showing survey results from six different surveys of satisfaction or happiness in China.: the World Values Survey, a couple of Gallup surveys, and surveys by Pew, Asiabarometer, and Horizon. The surveys use different scales: 1-10, 0-10, 1-4, 1-5, so the vertical axes of the graph are a mess. But remember, this is a time frame when per capita GDP more than quadrupled! It's hard to look at this data and see a huge upward movement. 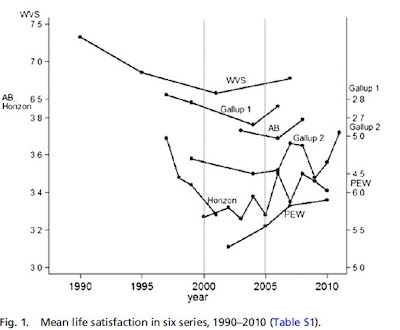 Easterlin and co-authors summarize the patterns this way: "According to the surveys that we analyzed, life satisfaction in the Chinese population declined from 1990 to around 2000–2005 and then turned upward, forming a U-shaped pattern for the period as a whole (Fig. 1). Although a precise comparison over the full study period is not possible, there appears to be no increase and perhaps some overall decline in life satisfaction. A downward tilt along with the U-shape is evident in the WVS, the series with the longest time span."

Indeed, Easterlin and co-authors point out that the happiness trend may be biased upward, because of this time there was a large rise in the “floating population" of "persons living in places other than where they are officially registered) in urban areas." This group tends to have lower life satisfaction.  " Between 1990 and 2010, the floating population rose substantially, from perhaps 7% to 33% of the total urban population ...  If the floating population is not as well covered in the life satisfaction surveys as their urban-born counterparts, then this negative impact is understated, and thus the full period trend is biased upward."

Why has satisfaction not flourished in China with the rise in GDP growth? Surely one reason is what some call the "aspirational treadmill:" the more you have, the more you want. But the reason emphasized by Easterlin's group is that "the high 1990 level of life satisfaction in China was consistent with the low unemployment rate and extensive social safety net prevailing at that time. Urban workers were essentially guaranteed life-time positions and associated benefits, including subsidized food, housing, health care, child care, and pensions, as well as jobs for grown
children ..." However, urban unemployment in China rose sharply from about 1990 into the early 2000s, but has fallen some since the mid-2000s. In addition, "Although incomes have increased for all income groups, China’s transition has been marked by a sharp increase in income inequality. This increasing income inequality is related to the growing urban–rural disparity in income, increased income differences in both urban and rural areas, and the significant increase of unemployment in urban areas associated with restructuring ..."

Intriguingly, the rise in income inequality in China is mirrored by greater inequality in reported life satisfaction. "In its transition, China has shifted from one of the most egalitarian countries in terms of distribution of life satisfaction to one of the least egalitarian. Life satisfaction has declined markedly in the lowest-income and least-educated segments of the population, while rising somewhat in the upper SES [socioeconomic status] stratum." For example, here's a graph that divides the population into thirds by income level. The figure shows what share of the population gave an answer from 7-10 on the World Values Survey satisfaction data. Notice that in 1990, all three income groups are clustered together. By 2007, they have separated out, with the highest income group remaining at about the same level, and the other groups declining in reported satisfaction--despite the fact that the incomes for all groups are much higher. 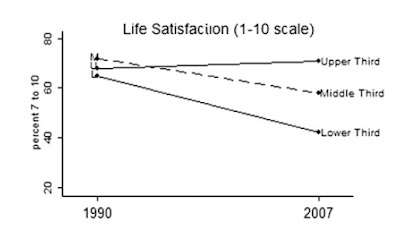 Taken to an extreme, the Easterlin paradox and these results from China might seem to suggest that economic growth is a waste of time. After all, economic growth doesn't seem to be making people more satisfied! But Easterlin would not make this argument, and it doesn't quite fit the survey results.
When answering on a scale of 1-10 or 1-5, most people will make a choice thinking about the present. They don't answer by thinking:  "Wow, I'm sure glad that I wasn't born a Roman slave 2000 years ago, and compared to that, I'm a 10 in satisfaction." Nor do they think: "Wow, compared to people who live 100 years from now, I'm living a short and deprived life, so I'm a 1 in satisfaction."

When people in China answered a "satisfaction" survey in 1990, they were not all that far removed in time from a period of brutal repression, and so it's not shocking to me that many in the lower and middle part of the income distribution told surveyers (who after all might have a government connection) that they were really quite satisfied. It's not just the economy that has grown in China since 1990; it's also the willingness and ability of many ordinary people to express dissatisfaction or discontent. I suspect that not many people in China would view their 1990 standard of living as similar or preferable to their current standard of living.


People do seem to answer satisfaction questions with some perspective on the rest of the world. For example, in a Spring 2008 article in my own Journal of Economic Perspectives, Angus Deaton presents evidence that if you look across the countries of the world in 2003, the level of satisfaction seems to rise steadily each time per capita GDP doubles. 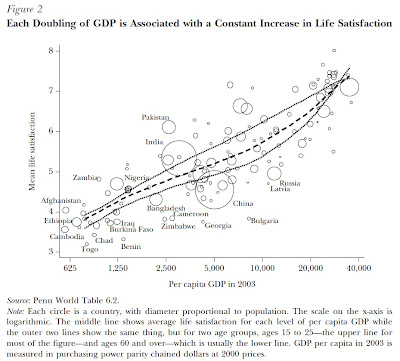 However, the results of the satisfaction surveys do highlight that when people are asked about their satisfaction, they take many factors into account along with average income levels: health, education, personal and political freedom, economic security, risk of unemployment, inequality, and others.When China allowed a greater degree of economic and political freedom, it unleashed an extraordinary rate of economic growth, but it also made created a public space for many other potential reasons for dissatisfaction. A record of past economic growth, even when exceptionally rapid, doesn't trump present concerns in people's minds--nor should it.