How Many "Discouraged" Workers?

Here's a graph of the data from BLS, which I made using the ever-helpful FRED tool from the Federal Reserve Bank of St. Louis. The bottom line shows the number of discouraged workers fluctuated around 400,000 from 1994 up to about 2008--a little higher in the aftermath of the 1990-91 and 2011 recessions, a little lower other times. But in the aftermath of the Great Recession, the number of discouraged workers spiked above 1.2 million, before falling back to under  million more recently.

The top line shows the broader category of "marginally attached" workers, which includes both those classified as "discouraged" and those who are marginally attached for other reasons. From 1994 it fluctuates around 1.5 million: higher in the aftermath of the 1990-91 and 2001 recessions, lower other times. But since 2008, it spiked up to 2.8 million, before dropping back to around 2.4 million more recently. 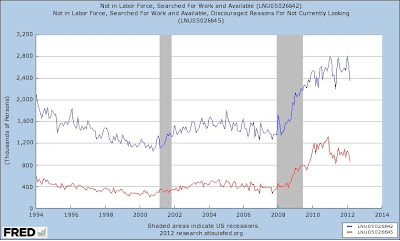 It doesn't seem right to treat the officially unemployed, who are actively looking for work, as in the same situation as the "marginally attached." But the high numbers of discouraged and marginally attached do demonstrate that the unemployment rate only captures one aspect of the weakness in U.S. labor markets.
Posted by Timothy Taylor at 6:00 AM