The standard story of U.S.-China trade over the last decade or so goes like this: Huge U.S. trade deficits, matched by huge Chinese trade surpluses. One underlying reason for the imbalance is that China has been acting to hold its exchange rate unrealistically low, which means that within-China production costs are lower compared to the rest of the world, thus encouraging exports from China, and outside-China production costs are relatively high, thus discouraging imports into China.

This story is simplified, of course, but it holds a lot of truth. But it's worth pointing out that these developments are fairly recent--really just over a portion of the last decade--and not a pattern that China has been following since its period of rapid growth started back around 1980. In addition, these development seem to be turning: the U.S. trade deficit is falling, China's trade surplus is declining, and China's exchange rate is appreciating. Here's the evolution in graphs that I put together using the ever-helpful FRED website from the St. Louis Fed.

First, here's a look at China's balance of trade over time. The top graph shows China's  current account balance since 1980, roughly when China's process of economic growth got underway. Notice that China a trade balance fairly close to zero until the early 2000s, when the surpluses took off. Because the first graph stops in 2010, the second graph shows China's trade balance from 2010 through the third quarter of 2011. Clearly, China's trade surplus has dropped in the last few years, and in all likelihood will be lower in 2011 than in 2010. 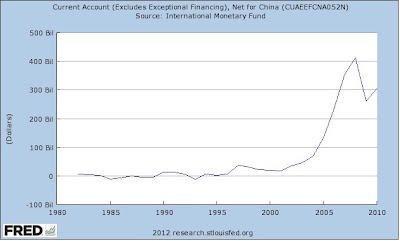 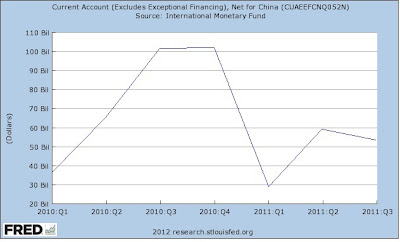 China's pattern of trade surpluses maps loosely follows its exchange rate. Here is China's exchange rate vs. the U.S. dollar since 1980. When an economy is experiencing extremely rapid productivity growth, the expected economic pattern is that its currency will appreciate over time--that is, become more valuable. However, as China's growth took off in the 1980s and into the 1990s, its currency depreciated--on the graph, it took more Chinese yuan to equal $1 U.S. than before. In about 1994, there is an especially sharp depreciation of the yuan, as it went very quickly from about 5.8 yuan/$1 to about 8.6 yuan/$1. During the booming U.S. economy of the late 1990s, this change had relatively little effect on the balance of trade, but by the early 2000s, it began to pump up China's trade surplus.  However, notice also that the value of China's exchange rate has dropped quite substantially over the last few years, withe much of the change coming before the Great Recession hit (U.S. recessions are shown with shaded gray vertical bands in the figure.) 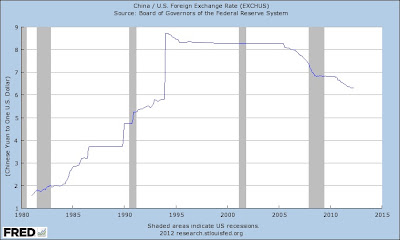 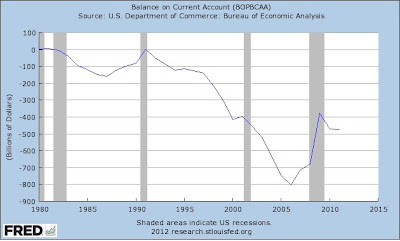 So what about the story with which I started: an overvalued Chinese currency, leading to huge Chinese trade surpluses and correspondingly huge U.S. trade deficits? At a minimum, the story is much less true that it was a few years back. Indeed, William R. Cline and John Williamson at the Peterson Institute for International Economics argue that the U.S.-China exchange rate has largely returned to the fundamental value justified by productivity and price differences between the two economies. Their argument appears in a May 2012 Policy Brief called  "Estimates of Fundamental Equilibrium Exchange Rates, May 2012."

They point out that China's trade surpluses are likely to be much smaller than the IMF, for example, was predicting a few years ago. And while they believe China's currency is still slightly undervalued, and needs to continue appreciating over time, they estimate that it's current value is not far from their "fundamental equilibrium exchange rate" or FEER.  They write:

"China is still judged undervalued by about 3 percent ... Thus, whereas a year ago we estimated that the renminbi needed to rise 16 percent in real effective terms and 28.5 percent bilaterally against the dollar (in a general realignment to FEERs), the corresponding estimates now are 2.8 and 7.7 percent, respectively. It is entirely possible that future appreciation will bring the surplus [China's trade surplus] down to less than 3 percent of GDP. But China still has fast productivity growth in the tradable goods industries, which implies that a process of continuing appreciation is essential to maintain its current account balance at a reasonable level."

In short, the episode of an overvalued Chinese currency driving huge trade imbalances may be largely behind us. The current U.S. trade deficits are thus more rooted in an economy which continues to save relatively little and to consume more than domestic production--thus drawing in imports.
Posted by Timothy Taylor at 6:00 AM