Alan Krueger, chairman of President Obama's Council of Economic Advisers, gave a lecture at Columbia University in late April on "Reversing the Middle Class Jobs Deficit." A certain proportion of the talk is devoted to explaining how all the good economic news is due to Obama's economic policies and how all of Obama's economic policies have benefited the U.S. economy. Readers can evaluate their own personal tolerance for that flavor of exposition. But the figures that accompany such talks are often of independent interest, and in particular, my eye was caught by some figures about U.S. college attendance.  (Full disclosure: Alan was editor of my own Journal of Economic Perspectives, and thus my direct boss, from 1996-2002.)

Krueger also points out that the chance of completing a bachelor's degree is strongly affected by the income level of your family.  The horizontal axis shows the income distribution divided into fourths. The vertical axis shows the share of those who complete a bachelor's degree by age 25. The lower red line is for those born between 1961-1964--that is, those who started attending college roughly 18 years later in 1979. The upper line is for those those born from 1979-1982--that is, those who started attending college in 1998. 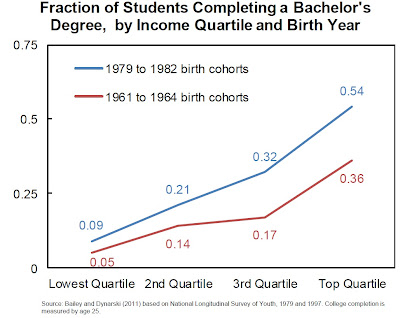 Here are a few observations based on this figure:

1) Even for those from top-quartile groups in the more recent time frame, only a little more than half are completing a bachelor's degree by age 25. To put it another way, the four-year college degree has never been the relevant goal for the median U.S. high school student. Given past trends and the current cost of such degrees, it seems implausible to me that the U.S. is going to increase dramatically the share of its population getting a college degree. I've posted at various times about how state and local funding for public higher education is down; about how the U.S. plan for expanding higher education appears to involve handing out more student loans, which then are often used at for-profit institutions with low graduation rates; and about how alternatives to college like certification programs, apprenticeships,  and ways of recognizing nonformal and informal learning should be considered.


2) Those from families in in lower income quartiles clearly have a much lower chance of finishing a four-year college degree. My guess is that this difference is only partly due to the cost of college, while a major reason for the difference is that those with lower incomes are more likely to attend schools and to come from family backgrounds that aren't preparing them to attend college. Moreover, the gap in college attendance between those from lower- and higher-income families hasn't changed much over the two decades between the lower and the higher line in the figure, so whatever we've been doing to close the gap doesn't seem to be working.