The price we pay for energy in part reflects the cost of production. But the primary sources energy involves other costs not captured in the purchase price: mainly health costs of pollution, but other environmental effects as well. Michael Greenstone and Adam Looney set out to compare the full costs of various ways of producing electricity in "Paying Too Much for Energy? The True Costs of Our Energy Choices." It's available here at the Spring 2012 issue of Daedalus, and is also available here.

To set the stage, here's a comment on the health consequence of our primary sources of fuel for electrical generation (footnotes omitted):

"Our primary sources of energy impose significant health costs–particularly on infants and the elderly, our most vulnerable. For instance, even though many air pollutants are regulated under the Clean Air Act, fine particle pollution, or soot, still is estimated to contribute to roughly one out of every twenty premature deaths in the United States. Indeed, soot from coal power plants alone is estimated to cause thousands of premature deaths and hundreds of thousands of cases of illness each year. The resulting damages include costs from days missed at work and school due to illness, increases in emergency room and hospital visits, and other losses associated with premature deaths. In other countries the costs are still greater; recent research suggests that life expectancies in northern China are about five years shorter than in southern China due to the higher pollution levels in the north. The National Academy of Sciences recently estimated total non-climate change-related damages associated with energy consumption and use to be more than $120 billion in the United States in 2005. Nearly all of these damages resulted from the effects of air pollution on our health and wellness."

What do the true costs of the energy that we use for producing electricity look like if we include production costs, costs of air pollution not related to carbon emissions, and then a social cost of roughly $21/ton for carbon dioxide emissions related to the risk of climate change? In this figure, the solid black bar is the production cost of the electricity, the checkered area is the non-carbon health costs, and the light gray area is the costs of carbon emissions. For those interested in the underlying data, the private costs of production are from Greenstone and Looney's own work; the non-carbon health costs are based on estimates from a National Academy of Sciences report; and the costs of carbon are based on a U.S. government Interagency Working Group on the Social Cost of Carbon (with which Greenstone was heavily involved). 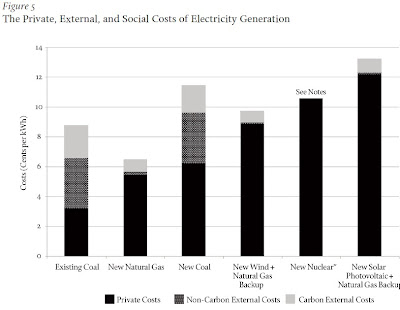 If you just look at production costs (dark bars), "existing coal" is clearly the least expensive option. If you take other costs into account, "New Natural Gas" is least expensive. When the horizontal axis refers to "new," as in "New Natural Gas" or "New Coal," it is referring to construction of a plant under the current regulatory regime for new plants. Thus, producing electricity from "New Coal" has a higher production cost than from "Existing Coal," but the health and carbon costs are also lower.

Not all costs are included here, as the authors readily acknowledge For example, the health costs of air pollution don't include costs of mining coal or uranium, nor potential health risks for installers of solar panels. "New Nuclear" has no health costs added, not because such costs don't exist, but because they fall into the dreaded UTQ category, for "Unable to Quantify." But it's always important to remember that absence of evidence is not evidence of absence. Clearly, nuclear power does have additional costs and risks, and mining coal and uranium have additional costs, and there are environmental risks and consequences of solar and wind power, too. I posted on March 14, 2012, about "The Mundane Cost Obstacle to Nuclear Power."

The fourth and sixth columns are especially interesting to me, because they offer a realistic way to think about costs of solar and wind power. One main difficulty with solar and wind is that they are intermittent sources of electricity generation, and thus they must be combined with an alternative.
The fourth and sixth columns thus combine electricity generated by solar and with electricity generated from natural gas as a back-up for times when the sun isn't shining and the wind isn't blowing. If one only looks at production costs, these combinations aren't yet competitive with generating electricity with coal or natural gas, but if one looks at all private and social costs, the combination of wind and natural gas is already looking fairly competitive with coal.

My own proposed national energy policy is the "The Drill-Baby Carbon Tax: A Grand Compromise on Energy Policy." The idea is to aggressively develop U.S. energy resources and at the same time to impose a tax that would reflect the environmental costs of using such resources.  Like many of my policy ideas, most people agree with only half of it--and they disagree about which half.