The May 19 issue of the Economist magazine, in an article  about California's budget problems and high prison costs, tossed in the following factoid: "Excessive incarceration is an American problem. The country has about 5% of the world’s population but almost 25% of its prisoners, with the world’s largest number of inmates and highest per capita rate of incarceration."

This comment sent me scampering to the website of the  International Centre for Prison Studies,          and based on data from their World Prison Brief, I put together the following table. The table lists the 20 countries around the world that imprison the greatest numbers of people, and the first column shows the total for each country. The second column shows how many people are imprisoned in the country per 100,000 population. Either way you slice it, the U.S. leads the way with its 2,266,832 prisoners and an imprisonment rate of 730 per 100,000 population. 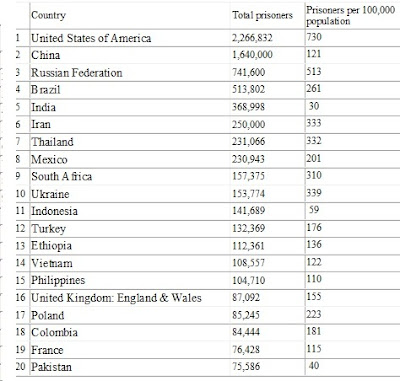 I've posted back on November 30, 2011, about "Too Much Imprisonment," and that post has details largely based on U.S. Department of Justice Statistics about the rapid rise in U.S. imprisonment over recent decades, the share of this rapid rise related to nonviolent offenses, and the cost.  Here, I want to raise a different question: If not prison, then what?

Here's an example from the local news: A woman named Amy Senser (wife of a former Minnesota Vikings professional football player Joe Senser) was convicted of two counts of criminal vehicular homicide: failing to immediately call for help and leaving the scene. Apparently she was taking an off-ramp from the highway, and the victim, Anousone Phanthavong, was putting gas into his stalled vehicle. It seems clear that Senser was driving the car when it hit him: her defense was that although she knew she had hit something, she didn't know it was a person. Senser may end up spending four years in prison.

Let me stipulate that I'm utterly unsympathetic to drivers who leave the scene of accidents, and I'm broadly unsympathetic to many of those who commit crimes. But whatever the ins and outs of the Senser case, it seems to me highly unlikely that she is going to drive a vehicle that hits someone else who is putting gas in their stalled car on a highway off-ramp. Moreover, my lack of sympathy with criminal behavior collides with other feelings. My skinflint spending tendencies note that imprisonment costs about $50,000 per year in the United States. My hard-headed practicality notes that most people who are imprisoned will re-enter society at some point, and we don't want to make that re-entry harder than it already is. Finally, my general soft-heartedness notes that those convicted of crimes also have children, parents, spouses, lovers and friends. When someone goes to prison, their community of human connections suffers as well.

For those who use violence in committing crimes against strangers, imprisonment seems appropriate. But for offenders who pose little or no danger of future violence, America needs to think about alternatives rather than blowing state and local budgets on imprisonment. Of course, those alternatives need to be chosen with care.

While fines or monetary penalties have their place, they aren't enough for me. I don't want the wealthy, or those with wealthy relatives, to be able to buy their way out of their misdeeds. I want to take the person's time, not their bank account.

I'm also not especially interested in the creative penalties that one sometimes reads about, where someone convicted of drunk driving needs to give talks to high school students, or attend the funerals of drunk driving victims, or spend weekend evenings in an emergency ward as casualties arrive. I doubt that it's practical to have tens of thousands of convicted criminals being shipped around from high school to YMCA to hospital emergency room. I don't like the legal system to be in the business of coercing half-hearted apologies. And I suspect that these "creative" penalties tend to apply more to those who are articulate and well-to-do and connected, and I see no reason why that group should get a break.

My thoughts about other alternatives are not well-formed. But in a world where we are deluged with concerns that technology is allowing us to be tracked and invading our privacy all the time, often without us knowing, it seems peculiar to me that our technology for dealing with criminals is a slightly more hygenic version of a penalty that has been around for millenia.

I find my thoughts turning to the "rubber rooms" where, as Stephen Brill discussed in the New Yorker magazine back in 2009, the New York City public school system was warehousing 600 public school teachers too incompetent to be returned to the classroom. These teachers much punch a time-clock at the beginning and end of the day, and in between, they stay in the room while the teachers' union appeals their disciplinary action. The average person has been there for three years--at full pay, of course. I also think about the jurisdictions where you see people in orange jumpsuits picking up trash by the side of the freeway. I think about ankle bracelets and applying advanced technology to old-fashioned house arrest, which might include monitoring or blocking of communication.

Put pieces of these together, and I imagine an alternative system that would serve many of the functions of punishment and incapacitation of the current prison system. It would combine requirements to report to supervised rooms for long periods of time, with an option to do certain kinds of physical labor around the community, but it would also send people home for most of the 24-hour day, under house arrest. There might be some flexibility where after a minimum time served, it would be possible for those in such a system to go to work, or to have a day or two off from reporting or surveillance each week. Those who didn't comply could of course end up in the traditional prison system. Such a system would still involve heavy and punitive restrictions on personal freedom. But it could be vastly cheaper for taxpayers, while also recognizing the reality that most of those convicted of most crimes will be walking, driving, working and living among us for most of their lives.
Posted by Timothy Taylor at 6:00 AM