It's hard to compare wages in different countries, because the details of the job differ. A typical job in a manufacturing facility, for example, is a rather different experience in China, Germany, Michigan, or Brazil. But for about a decade, Orley Ashenfelter has been looking at one set of jobs that are extremely similar across countries--jobs at McDonald's restaurants. He discussed this research and a broader agenda of "Comparing Real Wage Rates" across countries in his Presidential Address last January to the American Economic Association meetings in Chicago. The talk has now been published in the April 2012 issue of the American Economic Review, which will be available to many academics through their library subscription. But the talk is also freely available to the public here as Working Paper #570 from the Princeton's Industrial Relations Section.

How do we know that food preparation jobs at McDonald's are similar? Here's Ashenfelter:

"There is a reason that McDonald’s products are similar.  These restaurants operate with a standardized protocol for employee work. Food ingredients are delivered to the restaurants and stored in coolers and freezers. The ingredients and food preparation system are specifically designed to differ very little from place to place. Although the skills necessary to handle contracts with suppliers or to manage and select employees may differ among restaurants, the basic food preparation work in each restaurant is highly standardized. Operations are monitored using the 600-page Operations and Training Manual, which covers every aspect of food preparation and includes precise time tables as well as color photographs. ... As a result of the standardization of both the product and the workers’ tasks, international comparisons of wages of McDonald’s crew members are free of interpretation problems stemming from differences in skill content or compensating wage differentials."

Ashenfelter has built up McWages data from about 60 countries. Here is a table of comparisons. The first column shows the hourly wage of a crew member at McDonald's, expressed in U.S. dollars (using the then-current exchange rate). The second column is the wage relative to the U.S. wage level, where the U.S. wage is 1.00. The third column is the price of a Big Mac in that country, again converted to U.S. dollars. And the fourth column is the McWage divided by the price of a Big Mac--as a rough-and-ready way of measuring the buying power of the wage.

Ashenfelter sums up this data, and I will put the last line in boldface type: "There are three obvious, dramatic conclusions that it is easy to draw from the comparison of wage rates in Table 3.  First, the developed countries, including the US, Canada, Japan, and Western Europe have quite similar wage rates, whether measured in dollars or in BMPH.   In these countries a worker earned between 2 and 3 Big Macs per hour of work, and with the exception of Western Europe with its highly regulated wage structure, earned around $7 an hour.  A second conclusion is that the vast majority of workers, including those in India, China, Latin America, and the Middle East earned about 10% as much as the workers in developed countries, although the BMPH comparison increases this ratio to about 15%, as would any purchasing-power-price adjustment.   Finally, workers in Russia, Eastern Europe, and South Africa face wage rates about 25 to 35% of those in the developed countries, although again the BMPH comparison increases this ratio somewhat.  In sum, the data in Table 3 provide transparent and credible evidence that workers doing the same tasks and producing the same output using identical technologies are paid vastly different wage rates."

In passing, it's interesting to note that McWage jobs pay so much more in western Europe than in the U.S., Canada and Japan. But let's pursue the highlighted theme: How can the same job with the same output and the same technology pay more in one country than in another? One part of the answer, of course, is that you can't hire someone in India or Sough Africa to make you a burger and fries for lunch. But at a deeper level, the higher McWages in high-income countries is not about the skill or human capital in those countries, but instead reflects that the entire economy is operating at a higher productivity level. 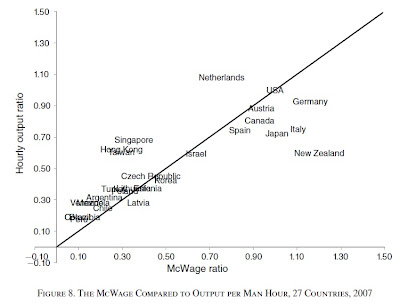 The key lesson of the figure is that the differences in McWages across countries line up with the overall productivity differences across countries. The main exceptions, in the upper right-hand part of the diagram, are countries where the McWage is above U.S. levels but output-per-hour for the economy as a whole is below U.S. levels: New Zealand, Japan, Italy, Germany. These are countries with minimum wage laws that push up the McWage.

Ashenfelter emphasizes in his remarks how real wages can be used to assess and compare the living standards of workers. I would add that these measures show that the most important factor determining wages for most of us is not our personal skills and human capital, or our effort and initiative, but whether we are using those skills and human capital in the context of a a high-productivity or a low-productivity economy.