The GM and Chrysler Bail-Outs

The U.S. government first extended emergency loans to GM and Chrysler in 2008 and 2009, and then stage-managed their 2009 bankruptcies. How is that working out? Thomas H. Klier and James Rubenstein tell the story in "Detroit back from the brink? Auto industry crisis and restructuring, 2008–11" in the second quarter issue of Economic Perspectives from the Federal Reserve Bank of Chicago. I'll lift facts and background from their more detailed and dispassionate description and tell the story my own way. 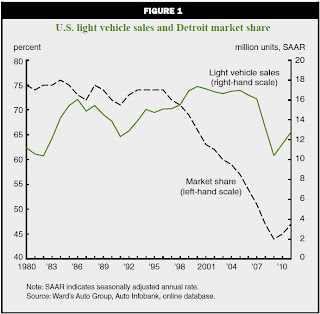 When the Great Recession hit, demand for cars dropped off, financing dried up, and gasoline prices spiked all at the same time. All of the Big Three were experiencing large losses, but Ford had a larger cash reserve. GM and Chrysler weren't going to make it.


On December 19, 2008, the lame-duck President George W. Bush authorized the use of the Troubled Asset Relief Program to give loans to GM and Chrysler. For the record, the TARP legislation discussed support for "financial firms," and had nothing to say about helping manufacturing firms. After the Obama administration came to office in early 2009, it gave TARP loans to GM and Chysler, too. Klier and Rubenstein report: "GM ultimately received $50.2 billion through TARP, Chrysler $10.9 billion, and GMAC $17.2 billion."


But GM and Chrysler were still bleeding money, and so the federal government stage-managed their bankruptcies. Standard bankruptcy law, in a nutshell, is that the stockholders get wiped out and the debtors and bondholders take losses--but end up owning a restructured firm with renegotiated contracts and obligations. However, Chrysler and GM used a formerly obscure part of the U.S. Bankruptcy Code, Section 363(b), that had been used for the Lehman Brothers bankruptcy. Basically, a newly formed company would receive all the desirable assets from the company--properties, personnel, contracts--while the old company kept the toxic stuff. This approach created "new" Chrysler out of "old" Chrysler in a month; GM took five weeks.

The strategies for the two firms were quite different. The plan with Chrysler was basically to get Fiat to run the firm. The table shows the evolution of ownership of "new" Chrysler. In the table, VEBA stands for "voluntary employees' beneficiary association," which is the legal form of the trust fund for retirement and health care of the United Auto Workers union. The old sad joke used to be that the big U.S. car companies were really a retirement fund with a car company attached: under this plan, the arrangement became explicit. Fiat was given a 20% ownership share for no cash payment, but with an agreement that it would run the firm and develop new products. The U.S. and Canadian governments took small ownership shares in exchange for the earlier loans they had made. Bondholders of secured debt got 29 cents on the dollar. 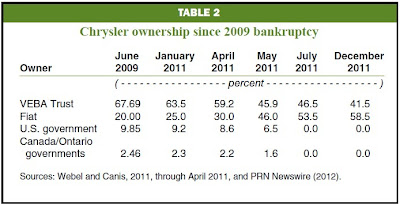 Part of the arrangement was that if Fiat met certain targets (sales, exports, developing fuel-efficient cars), then it could expand its ownership share of the firm. In May 2011, Chrysler paid back its government loans and Fiat bought out the remaining government ownership. Chrysler is again a car company primarily owned by, well, a car company, rather than a retirement fund.

GM was a different matter. In this case, the U.S. took 60.8% ownership while Canadian governments took another 11.7%. Thus, the moniker "Government Motors" was fully deserved. The VEBA trust got 17.5% ownership.  The GM bondholders, who in a standard bankruptcy arrangement would have ended up owning the firm, got the smallest slice. 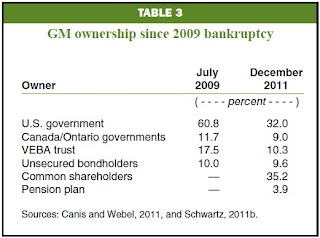 In November 2010, GM had a stock offering and raised $24 billion, allowing the government to get rid of a bunch of its shares. But ultimately, even after the government shouldered out the GM bondholders, it seems unlikely to recoup the TARP money it loaned. Klier and Rubenstein write: "In order for the government’s remaining 32 percent of the company to be worth $26.2 billion, representing all of the government’s remaining unrecovered investment, GM’s market capitalization would have to be approximately $81.9 billion. To achieve this market capitalization, the price of GM stock would have to exceed $52 per share, or more than twice its price in April 2012."

The bankruptcy did lead to dramatic changes. Here's a list of some changes (citations omitted):
The policy question about GM and Chrysler is sometimes phrased as "should they have been helped, or not." It's important to be clear that even though the two firms were helped, they still went into bankruptcy! If the firms hadn't received TARP loans, they would have gone into bankruptcy, too. Thus, the actual policy question here should be to compare the two stage-managed bankruptcy that did occur with what might have happened under a more standard bankruptcy procedure.