Are CEO's Overpaid? I confess that my knee-jerk answer to this question is "YES"! But Steve Kaplan makes a strong case for a more nuanced answer in Executive Compensation and Corporate Governance in the U.S.: Perceptions, Facts and Challenges," published in July as Chicago Booth working paper 12-42. Here's a sketch of some of  his arguments and graphs.

First, just as a matter of getting the facts straight, CEO pay relative to household income did spike back in the go-go days of the dot-com boom in the late 1990s, but since then, it is relatively lower. Kaplan argues that there are two valid ways to measure executive pay. One measure looks at actual pay received, which he argues is useful for seeing whether top executives are paid for performance. The other measure looks at "estimated" pay, which is the amount that financial pay packages would have been expected to be worth at the time were granted. This calculation requires putting a value on stock options, restricted stock grants, and the like, and estimating what these were worth at the time the pay package was given. Kaplan argues that this measure is the appropriate one for looking at what corporate boards meant to do when they agreed on a compensation package.

Here's one figure showing actual average and median pay totals for S&P 500 CEOs from 1993 to 2010. Average pay is above median pay, which tells you that there are some very high-paid execs at the top pulling up the average.  Also, average CEO pay spikes when the stock market is high, as in 2000 and around 2006 an  2007. Median realized pay seems to have crept up over time. 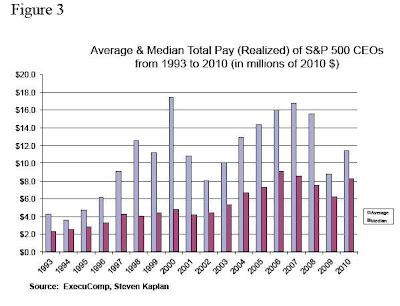 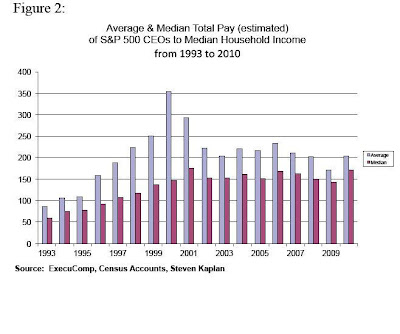 An obvious question is whether these pay levels are distinctive for CEOs, or whether they are just one manifestation of widening income inequality across a range of highly-paid occupations. Kaplan makes a solid case that it is the latter. For example, here's a graph showing the average pay of the top 0.1% of the income distribution compared with the average pay of a large company CEO.Again, the story is that CEO pay really did spike in the 1990s, but by this measure, CEO pay relative to the top 0.1% is now back to the levels common in the the 1950s. 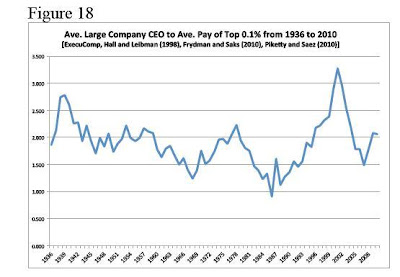 Kaplan also points out that the pay of those at the top of other highly-paid occupations has grown dramatically as well, like lawyers, athletes, and hedge fund managers. Here's a figure showing the pay of top hedge fund managers relative to that of CEOs in the last decade. Kaplan writes: "The top 25 hedge fund managers as a group regularly earn more than all 500 CEOs in the S&P 500. In other words, while public company CEOs are highly paid, other groups with similar backgrounds and talents have done at least equally well over the last fifteen years to twenty years. If one uses evidence of higher CEO pay as evidence of managerial power or capture, one must also explain why the other professional groups have had a similar or even higher growth in pay. A more natural interpretation is that the market for talent has driven a meaningful portion of the increase in pay at the top." 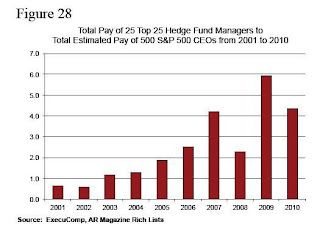 Kaplan also compiles evidence that CEOs of companies with better stock market performance tend to be paid more than those with poor stock market performance, and that CEOs have shorter job tenures. He writes: Turnover levels since 1998 have been higher than in work that has studied previous periods. In any given year, one out of 6 Fortune 500 CEOs lose their jobs. This compares to one out of 10 in the 1970s. CEOs can expect to be CEOs for less time than in the past. If these declines in expected CEO tenures since 1998 are factored in, the effective decline in CEO pay since then is larger than reported above." And the CEO turnover is related to poor firm stock performance ..."

To me, Kaplan makes a couple of especially persuasive points: the run-up in CEO salaries was especially extreme during the 1990s, and less  so since then (depending on how you measure it); and the run-up in CEO salaries reflects the rise in inequality across a wider swath of professions. While I believe the arguments that job tenure can be shorter for the modern CEO, especially if a company isn't performing well, it seems to me that most former CEO's don't plummet too many percentiles down the income distribution in their next job, so my sympathy for them is rather limited on that point.

In this paper, Kaplan doesn't seek to address the deeper question of why the pay for those at the very top, CEOs included, has risen so dramatically.  While the demand for skills at the very top of the income distribution is surely part of the answer, I find it hard to believe that these rewards for skill increased so sharply in the 1990s--just coincidentally during a stock market boom. It seems likely to me that
cozy institutional arrangements for many of those at the very top of the income distribution--CEOs, hedge fund managers, lawyers, and athletes and entertainers--also plays an important role.
Posted by Timothy Taylor at 6:00 AM