Without Health Insurance by State and County

The U.S. Census Bureau has published "Small Area Health Insurance Estimates (SAHIE): 2010 Highlights."  The document itself is only eight pages long with a few tables and figures. But it links to a nice interactive tool that lets you look at those with or without health insurance broken down by income, sex, race, age, and state or country. You can either generate data tables or maps.

Here's a basic table showing the share of those below 138% of the poverty line who lack health insurance on a state-by-state basis. The table is striking because, after all, Medicaid provides public health insurance for many of those below the poverty line. But it's worth remembering, as I discuss in an earlier post on "Medicaid in Transition," that Medicaid is aimed at the "deserving" poor, which covers low-income families with children, along with the poor who were also disabled or elderly, but it doesn't automatically cover everyone below the poverty line. Even more, the vast majority of Medicaid's spending is not on low-income families of able-bodied adults with children, but instead on those with low incomes who are also blind, disabled, and elderly. Thus, this table is showing how many of the poor and near-poor don't have health insurance. 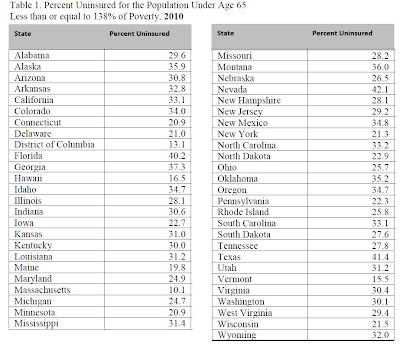 The table is also striking to me because it demonstrates the large size of cross-state differences in health insurance coverage. Some states have made a commitment to providing or encouraging health insurance in one way or another: for example, Hawaii, Massachusetts, Maine, and Vermont all have less than 20% of their under-65, under 138% of the poverty line population uninsured. Other states have not pushed hard in this direction: Florida, Nevada and Texas have more than 40% of their share of this specific population without health insurance.

Here's map generated with the SAFIE interactive data tool, showing the percentage of those lacking health insurance for all income levels on a county-by-county basis. The map shows that areas with relatively low proportions of those without health insurance are largely concentrated in the central and northeastern portions of the United States. 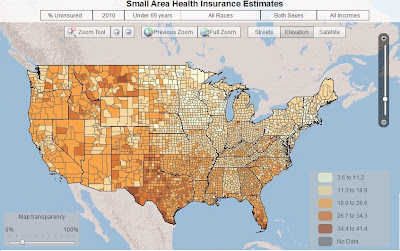 As I watch the election season unfold, it's interesting to me that many of the states which seem likely to support Obama are states that already have a relatively low population of those without health insurance, while many of those states that seem likely to support Romney have a relatively high population of those without health insurance. To some extent, the argument over providing health insurance for the uninsured is actually an argument that states which have not already taken steps to reduce the number of uninsured should be prodded and subsidized to do so.