How Much is Uncertainty Adding to Unemployment?

Why has the economic recovery been so sluggish? One set of possible explanations is rooted in the idea of economic uncertainty: in other words, the financial meltdowns of 2008 and 2009, along with major legislation affecting health care and the financial sector, along with ongoing disputes over budget and tax policy, along with the shakiness of the euro area, have all come together to create a situation where businesses are reluctant to invest and hire, and consumers are reluctant to spend.


Of course, the difficulty with explanations that evoke "uncertainty" is that, from an empirical point of view, measusuring uncertainty can be like trying to nail jello to a wall: it's messy, and when you're finished, you can't be confident that you've accomplished much. Sylvain Leduc and Zheng Liu describe their efforts to measure uncertainty and connect it with  macroeconomic outcomes in "Uncertainty, Unemployment, and Inflation," an "Economic Letter" written for the Federal Reserve Bank of San Francisco.

For starters, they use a two-part measure of uncertainty. One part is the "consumer confidence" survey that has been carried out since 1978 by the University of Michigan, now in partnership with Thomson/Reuters. They write: "Since 1978, the Michigan survey has polled respondents each month on whether they expect an “uncertain future” to affect their spending on durable goods, such as motor vehicles, over the coming year. Figure 1 plots the percentage of consumers who say they expect uncertainty to affect their spending." The other ingredient is the VIX index, which measures the volatility of the Standard & Poor's 500 stock market index: that is, it's not just measuring whether the stock market is rising or falling, but rather measuring whether the jumps in either direction are relatively large or small. As they point out: "The VIX index is a standard gauge of uncertainty in the economics literature." Here's a graph showing these two measures of uncertainty, with time periods of recession shaded. 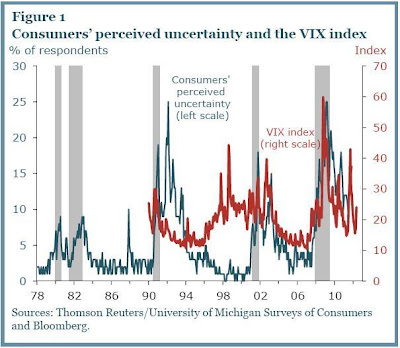 The authors work with data on these movements in uncertainty, compared and contrasted with what actual macroeconomic data is announced before and after the surveys, in an effort to figure out how much uncertainty by itself made the recession worse. They write:

"We calculate what would have happened to the unemployment rate if the economy had been buffeted by higher uncertainty alone, with no other disturbances. Our model estimates that uncertainty has pushed up the U.S. unemployment rate by between one and two percentage points since the start of the financial crisis in 2008. To put this in perspective, had there been no increase in uncertainty in the past four years, the unemployment rate would have been closer to 6% or 7% than to the 8% to 9% actually registered. While uncertainty tends to rise in recessions, it’s not the case that it always plays a major role in economic downturns. For instance, our statistical model suggests that uncertainty played essentially no role during the deep U.S. recession of 1981–82 and its following recovery. This is consistent with the view that monetary policy tightening played a more important role in that recession. By contrast, uncertainty may have deepened the recent recession and slowed the recovery because monetary policy has been constrained by the Fed’s inability to lower nominal interest rates below zero..."

Back in April, I described another attempt to measure economic uncertain in "Is Policy Uncertainty Delaying the Recovery?"  In that study, R. Baker, Nick Bloom, and Steven J. Davis created an index of economic uncertainty based on three different factors: newspaper articles that refer to economic uncertainty and the role of policy; the number of federal tax code provisions that are set to expire; and the extent of disagreement among economic forecasters. Their central finding: "The results for the United States suggest that restoring 2006 (pre-crisis) levels of policy uncertainty could increase industrial production by 4% and employment by 2.3 million jobs over about 18 months."  This is roughly the same magnitude of effect as Leduc and Liu find, although the two sets of researchers are using different data for meausuring uncertainty and different approaches for connecting uncertainty to macroeconomic outcomes.

It's hard to believe that economic uncertainty will drop a lot before Election Day 2012. But one way or another, it seems likely to decline after that.