Margaret Jacobson and Filippo Occhino have been investigating the fact that labor has been receiving a declining share of total economic output over the last few decades. I posted on their work last February in "Labor's Declining Share of Total Income."  Now they have written "Labor’s Declining Share of Income and Rising Inequality," which is "Economic Commentary" 2012-13 published by the Federal Reserve Bank of Cleveland.


The starting point is to look at labor income relative to the size of the economy. The top line in the figure shows labor income as a share of GDP, as measured in the national income and product accounts from the U.S. Bureau of Economic Analysis. The lower line in the figure shows the ratio of compensation to output for the nonfarm business sector, as measured by the U.S. Bureau of Labor Statistics. The measures are not identical, nor would one expect them to be, but they show the same trend: that is, with some ups and downs as the economy has fluctuated, the labor share of income has been falling for decades, and is now at an historically low figure. 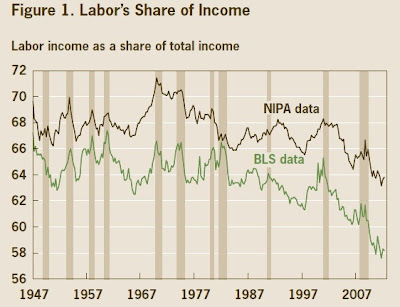 This fact lies behind much of the rise in inequality of incomes over this time. The income that is not being earned by labor is being earned by capital--and capital income is much more concentrated than is labor income. Jacobsen and Occhino offer an intriguing figure that measures the inequality of labor income and the inequality of capital income. The measure used here is a Gini coefficient, which "ranges between 0 and 1, with 0 indicating an equal distribution of income and 1 indicating unequal income." (Here's an earlier post with an explanation of Gini coefficients.) 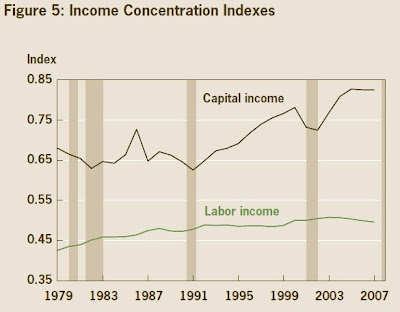 The figure has two main takeaways. First, labor income has become more unequally distributed over time, but since the early 1990s, the big shift in income inequality is because capital income is more unequally distributed. Second, capital income tends to rise during booms and to fall in recessions. Thus, it seems plausible that the inequality of capital income has dropped in the last few years of the Great Recession and its aftermath, but will rise again as economic growth recovers.

What has caused the long-run decline of the labor share of income? Jacobson and Occhino explain this way: "[W]e begin by looking at what determines the labor share in the long run. The main factor is the technology available to produce goods and services. In competitive markets, labor and
capital are compensated in proportion to their marginal contribution to production, so the most important factor behind the labor and capital shares is the marginal productivities of labor and capital, which are determined by technology. In fact, one important cause of the post-1980 long-run decline in the labor share was a technological change, connected with advances in information and
communication technologies, which made capital more productive relative to labor, and raised the return to capital relative to labor compensation. Other factors that have played a role in the long-run decline in the labor share are increased globalization and trade openness, as well as changes in
labor market institutions and policies."

There is no particular reason to believe that these trends will continue--or that they won't. But the declining share of income going to labor suggests the importance of finding ways to increase the marginal product of labor, especially for workers of low and medium skills, perhaps by focusing on the kind of training and networking that might help them make greater use of the advances in information and communication technology to improve their own productivity.