Payroll Jobs/Population Around the World from Gallup

The Gallup global survey offers an intriguing take on the global labor situation by taking the share of the population with full-time payroll jobs divided by the population over the age of 15. That is, this calculation does not include self-employed, the part-time, the unemployed or those out of the labor force for whatever reason. Here's a table showing the results. Only three countries in the world have a ratio of full-time payroll employment to population above 50%: Sweden, Belarus, and Israel. The United States has a ratio of 41%. A number of countries in the world have ratios below 20%, and there are even 20 countries in the world with a ratio below 10%. The lowest five countries on this metric are Central African Republic, Guinea, Burkina Faso, Congo (Kinshasa), and Lesotho. 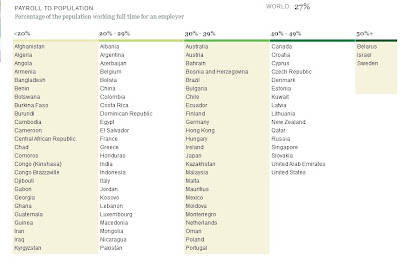 Here are some thoughts: 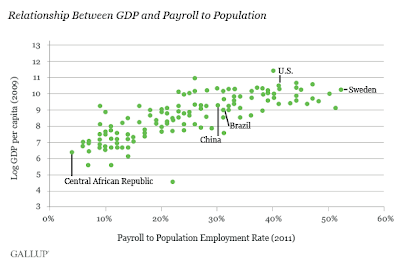 2) Those with payroll jobs view themselves as more likely to be "thriving," in Gallup's term, than others. Indeed, survey results from earlier this year suggest that for the world as a whole, the self-employed are less likely to be thriving than the unemployed.

3) There is a large difference between being "self-employed" in a developed economy like the United States vs. a less developed economy like the Central African Republic. As Gallup writes: "Not including the self-employed in Payroll to Population percentages may seem counterintuitive given the importance placed on entrepreneurship for creating jobs. However, self-employment in the developing world tends to be subsistence work and does little to help people rise out of poverty or contribute to the economic wellbeing of the country." Of course, a successful entrepreneur may start out as self-employed, but when that person hires other people to full-time jobs, their effect on the economy will show up in this measure.  But many of the low-income countries around the world just don't have many firms that act to organize and direct the efforts of labor, letting workers specialize and build up skills.

5) Looking at full-time payroll jobs/population also emphasizes why it can be so problematic to have non-wage benefits like health insurance or a retirement fund delivered through a long-term employer-employee relationship. Especially in low-income economies, but also in high-income economies like the United States, many people will not have a full-time employer-employee relationship for large portions of their lives. Those of us who have been fortunate enough to have employers and jobs for most of our adult lives should recognize that many do not share our experience. Creating a fertile economic environment for employers to hire employees is an important  task here in the United States, with our prolonged high rate of unemployment, but it's even more crucial for low-income economies all around the world.

Hat tip to Phil Izzo at the Wall Street Journal's "Real Time Economics" blog, where I first saw the Gallup survey reported.
Posted by Timothy Taylor at 7:00 AM