I keep reading news coverage about campaign contributions: how much each side is getting, who is giving the money, whether the money is going directly to candidates or to other organizations like political parties or political action committees, and so on. But when I worry about the influence of money in politics, I worry a lot more about spending on lobbying than I do about spending on campaigns.

Here's some basic data from the always-useful Open Secrets website run by the Center for Responsive Politics. The first table shows total reported spending on lobbying, year by year, although the 2012 spending is only for part of the year so far.  The second table shows total campaign spending, both for congressional and presidential races. 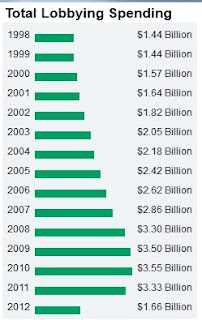 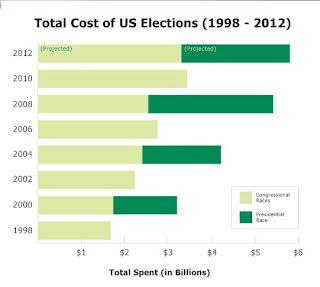 Here are some thoughts:


1) My guess is that a lot of spending on what I might think of as lobbying activities goes unreported: this is only spending from by registered lobbyists. Nonetheless, the amount of spending by lobbyists is consistently high, and comparable in size to campaign spending. For example, total spending on the 2010 campaign and on lobbying in 2010 were roughly similar, at about $3.5 billion. But spending on lobbying was also that high in 2009 and 2011, when there were no elections at all.

2) Spending on lobbying is much more concentrated. Open Secrets reports that the total of lobbying spending is spread over about 12,000 lobbyist in the last few years. In contrast, in the 2008 presidential campaign about 1.3 million Americans gave more than $200 to political candidates, parties, or PACs, and of that group, about 280,000 gave more than $2,300, and about 1,000 gave more than $95,000. It's true that a fairly small percentage of Americans give any money at all to political campaigns, but it's also true that the 1 million-plus individuals who do give are a much broader cross-section of society than are the lobbyists.


3) In many ways, spending on lobbying is better-targeted and less publicly clear than are campaign contributions. Lobbyists are often focused on the fine print that might be inserted in a broader piece of legislation--that exception or added provision that means so much to their employer. A campaign contribution gets spent on much more general purposes: advertising or travel costs or website maintenance or some other form of outreach to voters. In addition, Campaign contributions come from many different directions, representing many different interests. The public knows the outcome of political campaigns on Election Day, but the public never finds out about the success of many lobbying efforts, which may involve something as subtle as just leaving something out, or changing a word like "required" to a word like "recommended."

4) Some years back in the Winter 2003 issue of my own Journal of Economic Perspectives, Stephen Ansolabehere, John M. de Figueiredo and James M. Snyder Jr. asked a classic social science question, "Why is There so Little Money in U.S. Politics?" (The article is freely available on-line, like all JEP articles from the current issue back to 1994, courtesy of the American Economic Association.)  In 2012, the U.S. government will collect something like $2.5 trillion in taxes and will probably spend more than $3.5 trillion. Yet the campaign spending that shapes who will vote on these levels of taxes and spending is just $6 billion--about two-tenths of 1% of federal spending. For comparison, total sales of hair care products in the U.S. are about $7 billion per year, and sales of toothpaste are $2 billion per year. Proctor & Gamble alone spent something like $4.6 billion on advertising in 2010. It's probably not reasonable to think that a free-and-open U.S. national election in a $15 trillion economy should spend a whole lot less than what the country spends on hair care and toothpaste, or what one company spends on advertising.

Ansolabehere, Figueiredo and Snyder argue most campaign contributions, most of the time, should be viewed as a consumption good, not as an investment with an expected return. After all, most people and companies don't give anything to campaigns, which suggests that they don't think the money they give will affect the outcome. It's very hard to find evidence that campaign contributions cause politicians to vote in a way that the people of their district or state would object to: that is, politicians respond much more to their constituencies than to their campaign donors. Lots of people give money to causes they believe in, from United Way to various charities, and for the ideologically committed, political contributions often fall into the same general category.


5) I'll close by noting that concern over the effect of political contributions on election outcomes is often highly partisan. For example, I don't know a lot of Democrats who believe that President Obama's 2008 victory was noticeably tainted by his decision to break his earlier campaign pledge and become the first presidential candidate to forego matching funds so that he could vastly outspend John McCain by $745 million to $368 million (again, amounts according to the Open Secrets website). And I don't know any Republicans who have ever felt that a Republican victory was tainted by outspending the opposition.

Democracy can be in some ways a rowdy and unedifying process. But I distrust attempts by incumbent politicians to regulate the quantity or quality of spending on campaigns, which often seems to end up helping the incumbents remain in office. I'd rather rely on voters on election day to separate the wheat from the chaff. And those who want to reduce the role of money in politics might perhaps reallocate some time away from worrying about campaign contributions to encourage those incumbent politicians to restrict and publicize the efforts of lobbyists.