What the Official Poverty Rate is Missing

Yesterday the U.S. Bureau of the Census released its annual report on "Income, Poverty, and Health Insurance Coverage in the United States: 2011," this year written by Carmen DeNavas-Walt, Bernadette D. Proctor, and Jessica C. Smith. One finding is that the official U.S. poverty rate barely budged from 2010 to 2011, which if not positive news, is at least non-negative news. Here's a figure showing the number of people in poverty and the poverty rate since 1959: 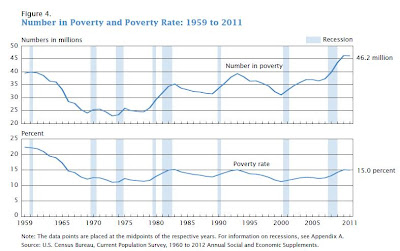 But the theme I want to take up here is that the official U.S. measure of poverty is based on money income before taxes, not on consumption levels. This subject is taken up in some detail by Bruce D. Meyer and James X. Sullivan in "Identifying the Disadvantaged: Official Poverty, Consumption Poverty, and the New Supplemental Poverty Measure," which appears in the most recent issue of my own Journal of Economic Perspectives. (Like all articles in JEP from the current issue back through the start of the journal in 1987, it is freely available on-line courtesy of the American Economic Association.)

One set of problems is clear: some of the largest government programs to help those in poverty have zero effect on the officially measured poverty rate. For example, Food stamps are technically a noncash benefit (even if in many ways they are similar to receiving cash), so they are not counted in the definition of income used for calculating the poverty rate. The Earned Income Tax Credit operates through the tax system, it is not covered in the definition of "money income before taxes" used to measure poverty. The same is true of the child credit given through the tax code. Medicaid assistance for those with low incomes is not cash assistance, so it doesn't reduce the measured poverty rate, either.

The fact that many anti-poverty programs have no effect on officially measured poverty is no secret. The Census report itself carefully notes: "The poverty estimates in this report compare the official poverty thresholds to money income before taxes, not including the value of noncash benefits. The money income measure does not completely capture the economic well-being of individuals and families, and there are many questions about the adequacy of the official poverty thresholds. Families and individuals also derive economic well-being from noncash benefits, such as food and housing subsidies,and their disposable income is determined by both taxes paid and tax credits received." As an example, the report points out that if EITC benefits were included as income, the number of children in poverty would fall by 3 million.

But there is a deeper issue with the official poverty rate, which is that it is measured on the basis of income, not on the basis of consumption. In a given year, a household's level of income and its level of consumption don't always match up. It's easy to imagine an example, especially in the last few years with sustained high unemployment rates, that some households had low income in a given year, but were able to draw on past savings, or perhaps to borrow based on credit cards or home equity. It's possible that measured by income, such households appears to be in poverty, but if measured by consumption (and especially if they own their own homes), they would not appear quite as badly off.

Meyer and Sullivan offer a fascinating comparison: they look at 25 characteristics that seem intuitively related to household well-being: total consumption; total assets; whether the household has health insurance; whether it owns a home or a car; how many rooms, bedrooms, and bathrooms in the living space; whether the living space has a dishwasher, air conditioner, microwave, washer, dryer, television, or computer, whether the head of household is a college graduate; and others. It turns out that if one looks at poverty by income and by consumption, with the poverty rates set to be equal in both categories, 84% of the people are included in either definition. But those who are "poor" by the consumption definition of poverty are worse off in 21 of the 25 categories of household well-being.


Setting a poverty line is a political decision, not a law of nature. Some decisions will always be second-guessed, and those who care about the details of what happens with different poverty lines can go to the Census Bureau website and construct alternative measures of the poverty rate based on different measures of income or different ways of defining poverty. But that said,  it seems downright peculiar to have an official income-based measure of poverty that isn't affected at all by several of the largest anti-poverty programs. And it seems peculiar to base our official measure of poverty on income, when the fundamental concept of poverty is really about having a shortfall of consumption.