I know that after the last few years of arguments over the  Patient Protection and Affordable Care Act of 2010, many of us are burned out with arguments over the U.S. health care system. We all know that the U.S. system has some of the finest and most innovative care in the world, along with extremely high costs and tens of millions of people without health insurance. But still, most people don't realize just how screwed up the U.S. health care system has become.

For chapter and verse, I recommend the Institute of Medicine Report, Best Care at Lower Cost: The Path to Continuously Learning Health Care in America. The Institute of Medicine is an independent, nonprofit organization, "the health arm of the National Academy of Sciences." The report is chock-full of interesting insights and comments; all quotations here are from the prepublication copy uncorrected proofs, which is available with free registration here. As is my custom, I'll delete citations and footnotes for readability. Here are a couple of palate cleansers, as the restauranteurs would say, before plunging into the main course:

"The tragic life of Dr. Ignaz Semmelweis offers an example of the challenges faced in
building a truly learning health care system. The Hungarian physician observed that simply
washing hands could drastically reduce high rates of maternal death during childbirth. But since
he could not prove a connection between hand washing and the spread of infection, he was
ridiculed and ignored. Hounded out of his profession, he died in a mental hospital. More than
165 years later, half of clinicians still do not regularly wash their hands before seeing patients."

And what are some consequences of this system, which has focused so heavily on procedures for the direct delivery of care, but so little on developing a genuinely integrated system for figuring out how and when to use these procedures? One problem is 75,000 deaths each year that should have been preventable.

"One way to measure this impact is through mortality amenable to health care, defined as the number of deaths that should not occur in the presence of timely and effective health care. Examples of amenable mortality include childhood infections, surgical complications, and diabetes. The level of amenable mortality varies almost threefold among states, ranging from 64 to 158 deaths per 100,000
population. If all states had provided care of the quality delivered by the highest-performing state, 75,000 fewer deaths would have occurred across the country in 2005."

Another problem is that perhaps a quarter or so of the $2.8 trillion that the U.S. will spend this year on health care is essentially excess costs. Here's the breakdown from the IOM report into unnecessary services, inefficiently delivered services, excess administrative costs, prices that are too high, missed prevention opportunities, and fraud. As the report points out, several studies with independent methodologies have found that the U.S. health care system could save something like $750 billion per year with no negative effect on health. Even saving half that amount, of course, would have extraordinary consequences for helping people see bigger raises in their paychecks and putting a huge dent in federal budget deficits. 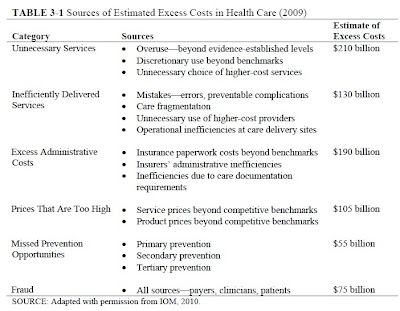 How can the U.S. health care system simultaneously waste one-fourth or so of the king's ransom that it spends each year, while still allowing 75,000 preventable deaths each year? The long answer is in the IOM report. The shorter answer, I would say, is that health care is increasingly complex in a way that requires systematic attention to collecting information and coordinating care--and the fragmented and helter-skelter U.S. health care system has not been good at these tasks.

Here are some examples of these problems of growing complexity and lack of coordination, many more of which are scattered through the IOM report:

"The prevalence of chronic conditions, for example, has increased over time. In 2000, 125 million
people suffered from such conditions; by 2020, that number is projected to grow to an estimated
157 million ... Almost half of those over 65 receive treatment for at least one chronic disease, and more than 20 percent receive treatment for multiple chronic diseases; fully 75 million people in the United States have multiple chronic conditions. Managing these multiple conditions requires a holistic approach, as the use of various clinical practice guidelines developed for single diseases may have adverse effects. For example, existing clinical practice guidelines would suggest that a hypothetical 79-year-old woman with osteoporosis, osteoarthritis, type 2 diabetes, hypertension, and chronic obstructive pulmonary disease should take as many as 19 doses of medication per day. Such guidelines might also make conflicting recommendations for the woman’s care."

"Care delivery also has become increasingly demanding. It would take an estimated 21 hours a day for individual primary care physicians to provide all of the care recommended to meet their patients’ acute, preventive, and chronic disease management needs. Clinicians in intensive care units, who care for the sickest patients in a hospital, must manage in the range of 180 activities per patient per day—from replacing intravenous fluids, to administering drugs, to monitoring patients’ vital signs. In addition, rising administrative burdens and inefficient workflows mean that hospital nurses spend only about 30 percent of their time in direct patient care."


"As illustrated in Figure 2-8, a medication order at one academic medical center can be filled in 786 different ways, involving a number of different health care professionals and technological channels. Another study found that inefficient medication administration practices at one hospital caused nurses to waste 50 minutes per shift looking for the keys to the narcotics cabinet ... 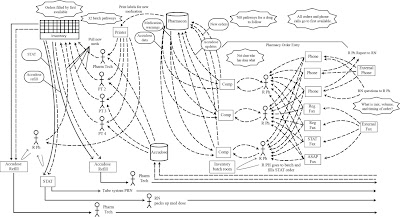 "Another study found that in a single year in fee-for-service Medicare, the typical primary care physician had to coordinate with 229 other physicians in 117 different practices. Further, the rate at which physicians refer patients has doubled over the past decade, and the number of primary care visits resulting in a referral has increased by nearly 160 percent ..."

"Projections are for 90 percent of office-based physicians to have access to fully operational electronic health records by 2019, up from 34 percent in 2011 ..."

In short, the sharply rising complexity of what modern medicine can do, interacting with systems of health care provision and health care finance that were already growing outdated by the tail end of the 20th century, is costing enormous amounts and failing to deliver. I know full well the difficulties of collecting, organizing, and feeding back health information, and of reorganizing existing health care systems. But the financial and health costs of failing to push for such change are enormous. And frankly, both the 2010 health care legislation  and the Republican alternatives offer little more than tinkering around the edges and hoping for the best, while the U.S. health care system runs amok.