A Decline in Homelessness

Homelessness in America has apparently declined in the last few years despite the effects of the Great Recession. This unexpectedly welcome news is from the annual Point-in-Time survey of homeless carried out by Abt Associates for the U.S. Department of Housing and Urban Development, and reported in  "The 2013  Annual Homeless  Assessment  Report (AHAR)  to Congress." A national survey of homeless across the country is conducted for a single night in late January. Here's one figure summarizing the results: 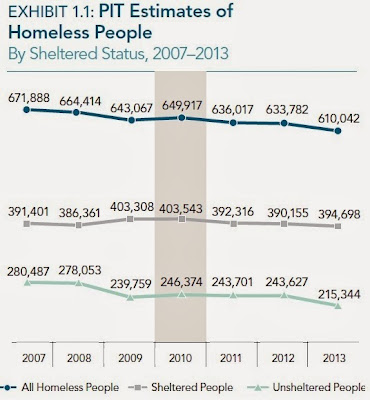 But the survey results raise an obvious puzzle. The number of "sheltered" homeless people is essentially the same in 2007 as in 2013. All of the decline is in the category of "unsheltered" homeless people. It seems obvious that when the Great Recession hit in late 2007, one should see a substantial rise in homelessness, whether sheltered or unsheltered. The report carefully points to a 2010 "Federal Strategic Plan to Prevent and End Homeless" called "Opening Doors." The date of this report is why the year 2010 is shaded in the figure above. But the survey data clearly shows a large change in the "unsheltered" homeless before the 2010 plan in 2008 and 2009, in the worst of the Great Recession, before the 2010 plan took effect.

The fact that homelessness has substantially declined does not seem especially controversial. For example, here's a chart from the National Alliance to End Homelessness in its April 2013 report, "The State of Homelessness in America 2013." The report uses data from a variety of government sources, including the HUD data, and thus is similar but not identical to the previous report. 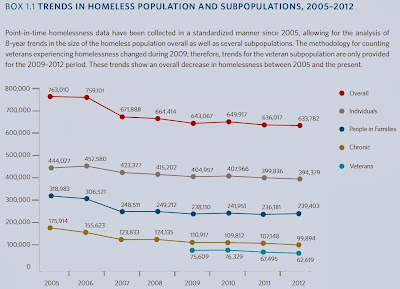 This graph shows that if one projects back just a little further, there is a substantial decline in homelessness from 2006-2007. (The AHAR report for 2009 shows the decline from 2006 to 2007, but annual reports since then start with 2007, which seems to me a dubious practice.)

Why has homelessness declines? Of course, it's easy enough to make up stories about how the survey might have been done differently over time, or about how the focus on a single night in January might lead to variability in the survey results depending on weather conditions and other factors. But the year-to-year survey results aren't showing a lot of variability, and advocacy groups like the National Alliance to End Homelessness are not arguing that the official statistics are misleading or incorrect.

Instead, a more common argument seems to be that policies to reduce homeless have been effective. For example, the drop in homelessness after 2006 has been attributed to a Bush administration "housing first" policy that focused on getting the homeless into housing first, and then seeking to address their addiction or health problems. The 2009 fiscal stimulus bill included a $1.5 billion Homelessness Prevention and Rapid Re-Housing Program. Various other government programs to assist those with low incomes, as well as a greater willingness of those with low incomes to "double up" in housing, have made a difference, too. Here's a figure from the National Alliance to End Homelessness report: 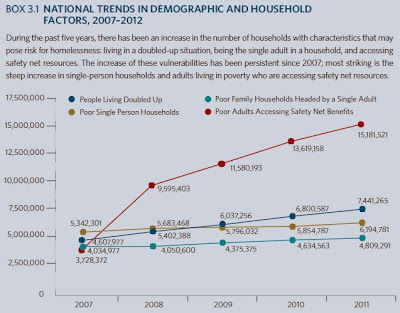