Life expectancies are rising, but how healthy will people be in those additional years of life? The debate over "compression of morbidity" asks whether people who live longer will experience more years of illness, or the same number of years of illness, or even fewer year of illness. Of course, if people experience fewer years of illness before death, it would have enormous social effects, including lower spending on health care and long-term care services for the elderly, as well as a greater ability of the elderly to participate actively in their families, their communities, and the workforce. There's some evidence that compression of morbidity is in fact occurring.

David Cutler, Kaushik Ghosh, and Mary Beth Landrum report "Evidence for Significant Compression of Morbidity in the Elderly U.S. Population" in National Bureau of Economic Research  Working Paper #19268. (NBER working papers aren't freely available, although many readers will be able to access them through library subscriptions. However, a short readable summary of the paper is available here.) They use data from the Medicare Current Beneficiary Survey going back to 1991 and look at various measures of morbidity: certain diseases, whether the person reports limits on activities of daily living, and 19 measures of functioning that can be affected by health. They summarize their results like this:

Here's an illustration of one of their findings. The solid blue line shows the rate of Activities of Daily Living (ADLs) and Instrumental Activities of Daily Living (IADLs) for the entire group. ADLs include basic activities like feeding and dressing yourself, or going to the bathroom. IADLs include broader functioning activities like grocery shopping, housework, and phone calls. The top two lines show that the proportion of Medicare beneficiaries who turn out to be within a year or two of death have reporting these disabilities at pretty much the same rate over time. But Medicare beneficiaries who are further from death are reporting these disabilities at a lower rate. The same morbidity in the couple of years before death, but lower morbidity for those further from death, means that compression of morbidity is occuring. 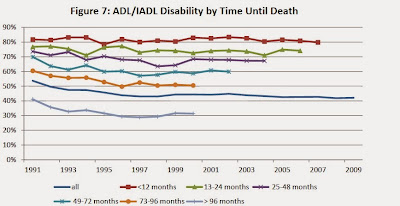 There's also some evidence that the rate of dementia or Alzheimer's disease in older age groups is declining in a number of countries. Eric B. Larson, Kristine Yaffe, M.D., and Kenneth M. Langa summarize this evidence in  "New Insights into the Dementia Epidemic,"  appearing in the December 12 issue of the New England Journal of Medicine. Of course, a falling rate of dementia means that the chance of getting Alzheimer's can be reduced by various factors. They write: "But for now, the evidence supports the theory that better education and greater economic well-being enhance life expectancy and reduce the risk of late-life dementias in people who survive to old age. The results also suggest that controlling vascular and other risk factors during midlife and early old age has unexpected benefits. That is, individual risk-factor control may provide substantial public health benefits if it leads to lower rates of late-life dementias."

Here's a table summarizing some of the studies mentioned by Larson, Yaffe, and Langa: 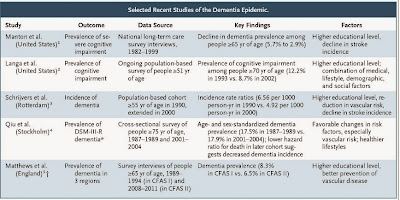 Of course, the ultimate ideal for compression of morbidity is to live in full and perfect health right up until the day of their death. My mental metaphor for such a happy event is the old poem by Oliver Wendell Holmes, "The Wonderful One Hoss Shay," about a carriage that was built so well that it worked perfectly and marvelously for 100 years. The carriage had been built with no weak parts, so that it didn't break down one piece at a time; instead, after 100 years it suddenly disintegrated into dust. Here are the opening and closing stanzas:

Have you heard of the wonderful one-hoss-shay,
That was built in such a logical way
It ran a hundred years to a day,
And then, of a sudden, it--ah, but stay
I'll tell you what happened without delay ...

What do you think the parson found,
When he got up and stared around?
The poor old chaise in a heap or mound,
As if it had been to the mill and ground!
You see, of course, if you 're not a dunce,
How it went to pieces all at once,--
All at once, and nothing first,--
Just as bubbles do when they burst.
End of the wonderful one-hoss-shay.
Logic is logic. That's all I say.