Most of the federal budget is spent paying benefits in the so-called "mandatory" programs, where rules are set that (unless or until the rules are changed!) require payments to be made to people meeting certain conditions. But part of the budget is "discretionary" spending on items where the government decides how much to spend each year, and in turn, a portion of that discretionary spending is about investments. The Congressional Budget Office gives an overview of "Federal Investment" in a recent report.

Here's an overview of the spending side of the federal budget. The main examples of mandatory programs are Social Security, Medicare, and Medicaid, but other benefits programs like food stamps or unemployment insurance are also included.  My main focus here is on the non-defense investment programs. While it's true that a few decades back, defense-related research and development often led to civilian products, the more common pattern in the last couple of decades has been that technology advances first in the civilian sector, and then the defense organizations find ways to apply that technology. 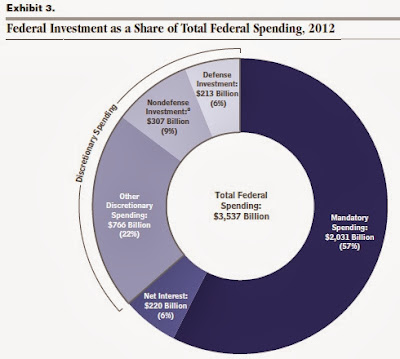 Over the last couple of decades, defense-related investment has dropped off as a share of GDP. Defense investment is about two-thirds physical capital, like weapons and equipment, and about one-third research and development. Nondefense investment dropped some in the 1980s, and stayed low until the burst of fiscal stimulus spending in 2009.

There are three main areas of nondefense federal investment: research and development, education, and physical capital. Physical capital is mainly related to transportation, including both infrastructure and equipment. 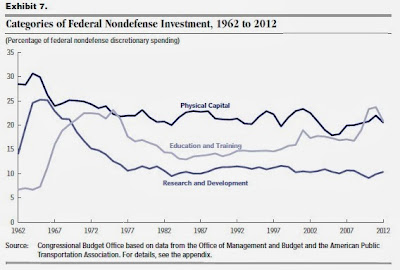 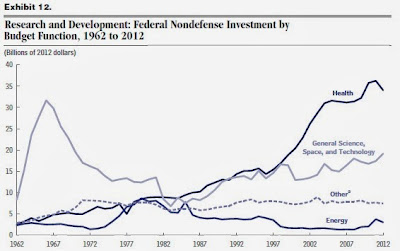 Within the category of education and training investment, back in the 1980s federal spending on K-12 education, higher ed, and training and employment were roughly equal. Now, K-12 is out ahead, closely followed by higher ed, with training and employment lagging behind. Of course, it's important to remember that the overwhelming majority of K-12 and higher ed spending in the U.S. happens at the state and local level, not the federal level. 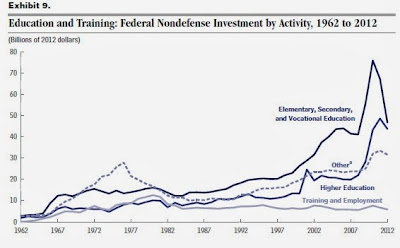 Finally, here's a a figure on transportation infrastructure investment, showing that overall spending in this area has fallen as a share of GDP, and a greater share of this investment is happening at the state and local level, rather than the federal level. 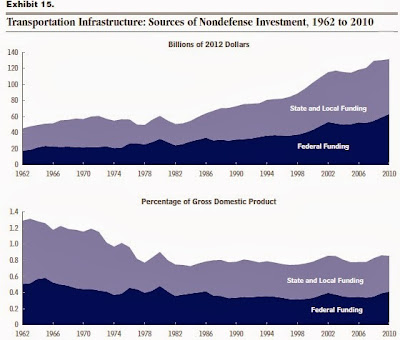 Budgets are an expression of priorities. The priority of the federal government is clearly about paying benefits, not about investing in the future. As far as I know, no one disagrees on the need for investing in the future of the U.S. economy. But when push comes to shove, federal investment spending is just hanging on, not expanding. Of course, each individual investment should be evaluated on a cold cost-benefit basis. But is it really the case that there is no cost-benefit argument for higher research and development spending on science and technology and on energy? No cost-benefit argument for higher federal spending on training and employment programs at a time when unemployment has been high and wages for low-skilled workers have been lagging? No cost benefit argument for more spending on transportation  infrastructure at a time when so many roads, bridges, airports, and seaports are overcrowded and physically wearing out? My sense is that in many of these areas, the federal government has for decades been pulled toward paying benefits in the present, rather than seeking out ways to invest in future growth.
Posted by Timothy Taylor at 6:00 AM