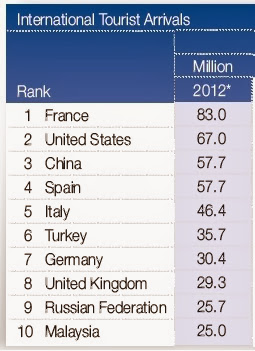 But it's important to note that when international tourists come to the United States, it is a form of exporting: that is, in both cases U.S. producers receive income from foreign buyers. A McKinsey Global Institute report a couple of years ago looked at opportunities in different sectors for job creation and noted: "[T]o reach the high-job-growth scenario, the United States needs to retake lost ground in global tourism. ... In particular, the United States is not getting its share of tourism from a rising global middle class. More Chinese tourists visit France than the United States, for example."

The U.S. Travel Association is the leading industry trade group for promoting the U.S. tourism industry. Earlier this year, it put out "Gateway to Jobs and Growth: Creating a Better Traveler Entry Process." The emphasis of the report is to point out ways that the process for long-haul international tourists entering the U.S. could be streamlines, while still respecting security needs. But along the way, the report also tosses out some facts about international tourist in the U.S. economy:

"Between 2000 and 2012, the number of long-haul worldwide travelers  increased by 78.8 million.  During that time, the U.S. share of global long-haul  travel fell from 17 percent in 2000 to just 12.9 percent in 2012. The bottom line: Tens of millions of new travelers went somewhere other than the U.S." If U.S. international tourism had kept pace with the international trends, it would have meant an extra 100 million tourists over the last decade or so. The report also notes:

"International visitors to the U.S. – especially from overseas – stay longer and spend more money than domestic travelers. One particularly important trend in  the global travel market is the boom in travel from the rapidly expanding middle  and upper classes of the emerging economies in the developing world, countries  like Brazil, Russia, India and China (BRIC). While overseas visitors, on average, spend nearly $4,500 per person per trip, visitors from China and Brazil spend much more: $5,200 for Brazil and $6,000 for China.  Several of the BRIC countries have shown major passenger increases to the U.S. in recent years (2007–2012), including China (271%), Brazil (180%) and India (28%). These statistics show the importance of the BRIC countries and other emerging markets to global travel growth. Increasing international travel has helped make travel the nation’s largest service  export. In economic terms, international travel is counted as an export because dollars come into the country in the same way as they do when foreigners buy American cars, grain or software. Every 33 overseas visitors who travel to America support one U.S. job."

My sense is that a lot of Americans still tend to think of the United States as a source of tourists headed other places, but not primarily as a destination for international tourists. Having the rest of the world see how America works (and in some ways doesn't work) is important for many reasons. But international tourism is affected by nonmonetary costs, including the costs of time and energy to fulfill the paperwork in entering the country, as well as the ease with which an international traveler can navigate around the country. In the globalizing world economy, it's time for the U.S. to think about what it would take to roll out the welcome mat for international travelers.