Worldwide Income Inequality: From Two Humps to One

To calculate a worldwide measure of income inequality, you need to work with data on the distribution of income for the population in every country--and for many countries, this data is mismatched and helter-skelter. You need to convert the income data for all countries into a common currency, like U.S. dollars.  You then add up all the people in the world who fall into each income category. To do comparisons over time, you need to find data for different countries over time, and then also adjust for inflation. Christoph Lakner and Branko Milanovic of the World Bank take on this task in "Global Income Distribution From the Fall of the Berlin Wall to the Great Recession," published this month as Policy Research Working Paper 6719. 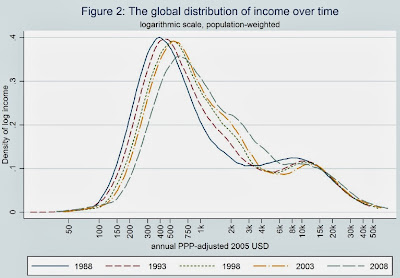 An obvious question here is to what extent these changes are about what has happened in China and in India, which after all combine to include about one-third of the world's population. Here's a figure showing the shifts over time, with the population of India and China  shaded separately. You can see that the shift in the shape of the global income distribution an largely be traced to India and China. In particular, you can see that the hump to China is pretty much centered over the hump for India in 1988 and 1993, but by 2008, the hump for China is now shifting to the right more than the hump for India, reflecting China's faster rate of economic growth. 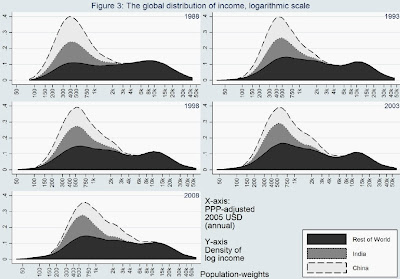 Note: Hat tip to Howard Schneider at the Washington Post Wonkblog, where I saw the Lakner-Milanovic working paper mentioned.