Distribution of US Federal Taxes

For those who like some facts to go with their arguments over redistribution and tax policy, the Congressional Budget Office has just published "The Distribution of Household Income and
Federal Taxes, 2010." Here is some of what caught my eye.

There are several main categories of federal taxes: individual income tax, the social insurance taxes that fund Social Security and Medicare, corporate income tax (which is ultimately paid by individuals), and excise taxes on gasoline, cigarettes and alcohol. This chart shows the average tax rates paid in each category, broken down by income group.

1) It's important to remember that this is the average rate of tax expressed as a share of income. For example, those in the top 1% are almost surely  paying the top marginal tax rate of about 40% on the top dollar earned. But when all the income taxed at a lower marginal rate is included, together with exemptions, deductions, and credits, this group pays an average of 20.1% of their income in individual income tax.

2) Average individual income taxes are negative for the bottom two quintiles. This arises because of "refundable" tax credits like the earned income tax credit and the child tax credit, which mean that many lower-income households not only owe zero in taxes, but receive an additional payment from the IRS.

3) In the calculations for effects of the corporation income tax, the underlying assumption is that high-income households end up paying much of the cost, because they are the ones who own most of the stock in these companies. In the calculations for excise taxes, the analysis is that low-income households pay a greater share of their income for these taxes, because they spend a greater share of their incomes on these products.

What if instead of looking at average tax rates, we look at the share of each of these taxes collected from the different groups? The table looks like this:

How have federal tax rates changed over time for various income groups? It's true that average tax rates for the top 1% are down from the mid to late 1990s. It's also true that tax rates for the rest of the income distribution are lower in 2010 than back in the 1990s. From 2008 through 2010, the federal tax rate as a share of income was at its lowest level during this time period. Of course, this is due in part to people having less income and finding themselves in lower tax brackets, and in part to various tax cuts aimed at stimulating the economy. 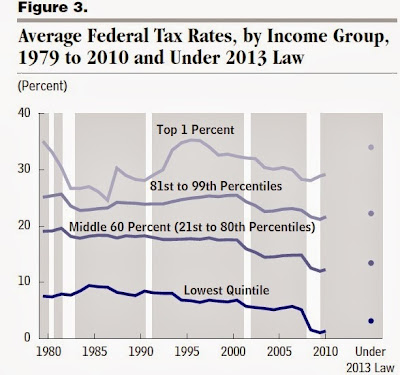 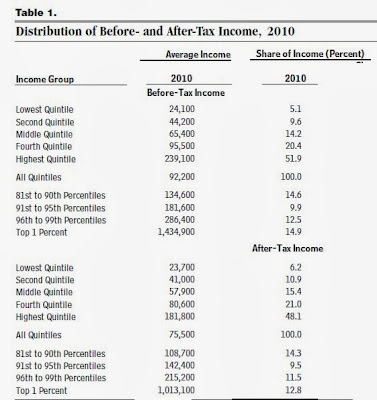 I'll close by saying that in my experience, presenting these kinds of statistics doesn't really change anyone's mind about whether the tax system is fair or unfair, or how the tax system should be altered.  Back in 1938, Henry Simons of the University of Chicago wrote a book called Personal Income Taxation, in which he commented: "The case for drastic progression in taxation must be rested on the case against inequality -- on the ethical or aesthetic judgement that the prevailing distribution of wealth and income reveals a degree (and/or kind) of inequality which is distinctly evil or unlovely." Most people don't alter their "ethical or aesthetic judgement" about what is "evil or unlovely" based on statistical charts. But I live in hope that the presentation of facts, like water against stone, can at least erode the sharper edges of some of our political disputes.
Posted by Timothy Taylor at 6:00 AM