The U.S. unemployment rate has been dropping, from its peak of 10% in October 2009 to 7% in November 2013. But the labor force participation rate--that is, the share of U.S. adults who either have jobs or are actively looking for jobs--has also been dropping. It was 66.4% in January 2007 before the start of the recession, and has now fallen to 63%. Thus, is the fall of three percentage points in the unemployment rate really showing that roughly three percentage points of adults have become so discouraged by the dismal labor market prospects of the last few years that they have stopped looking for work?  Shigeru Fujita offers some facts and trends in "On the Causes of Declines in the Labor Force Participation Rate," a "Research Rap" from the Federal Reserve Bank of Philadelphia.

To orient oneself among the arguments here, consider this graph showing the unemployment rate and the labor force participation rate since 1995. The fact that both have decline in the last few years is apparent on the right-hand side of the graph. But what is also apparent is that the decline in the labor force participation rate seems to speed up in the aftermath of the Great Recession, but it actually started back in the late 1990s. 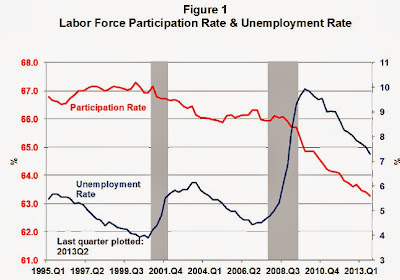 Just to be clear about these concepts, measures of unemployment always have some fuzziness because it's necessary to separate out those who lack jobs and want jobs from those who lack jobs and aren't looking for a job. In some cases this distinction is quite clear: a happy 75 year-old retiree who isn't looking for work, or someone who is choosing to be a stay-at-home parent, is clearly out of the labor force. But in other cases, the distinction can be fuzzy. Maybe someone decides to retire a year or two earlier than expected, or to apply for disability payments, or just to stop looking for a job, because the job market in their area looks so dismal. The person would then not be technically counted as "unemployed," but only "out of the labor market." However, their choices were clearly shaped by the poor labor market. 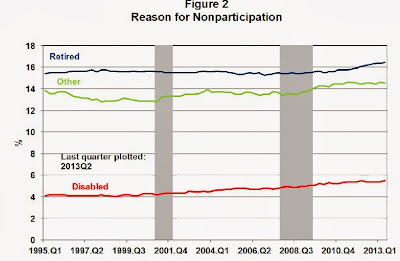 The "other" can include a lot of  possibilities, from a contented stay-at-home parent, to someone with health or transportation problems, or someone who has become too discouraged by the poor labor market even to look for work. But one way to divide up the "other" category is to ask them whether they want a job. The figure shows that the share of those in the "other" category who want a job is mostly declining from 1995 to the start of the recession in late 2007, and bumps up only slightly after that. 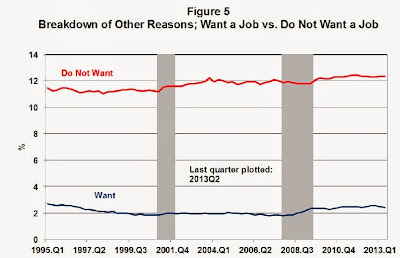 So what conclusions can be drawn from this?

1) If one looks back at the drop in labor force participation rates from 1995 to the present, the main factors during most of that period are the rise in the "other" category that isn't looking for work--which presumably is not a public policy problem--and the rise in disability claims. I've posted fairly recently with some thoughts on the "The Disability-Industrial Complex" (October 23, 2013).

2) If one focuses on just the recent drop in the labor force participation rate, only a modest share can be accounted for by those who are out of the labor force but say they want a job. Fujita writes: "[I]t is true that there were more discouraged workers during the post-Great Recession period than before the recession (roughly 0.5 percentage point more in terms of the working age-population). However, the size of this group has been roughly flat since 2011. In this sense, it is misleading to attribute the decline in the unemployment rate in the last few years to discouragement."

3) It's not obvious how to think about the interaction between more retirees and the falling labor force participation rate. Fujita writes: "[T]he decline in the [labor force] participation rate since the beginning of 2012 is entirely due to retirement." Surely, some of these retirees are premature, in the sense that the people would have preferred to work a few more years but couldn't find jobs. On the other hand, the "Baby Boom" generation started right after World War II, and as members of that generation reach their mid-60s, it's been obvious for a long time that labor force participation rates were likely to fall starting around 2010 or so.

The bottom line, as I see it, is that the drop in the unemployment rate is not just a smokescreen for a labor market that hasn't really improved since 2008. Relatively few of those who are retired, disabled, or too discouraged to seek a job are likely to return to the labor force. Instead, most of the drop in the unemployment rate in the last few years is a meaningful indicator that the U.S. economy is gradually improving and returning to health.