International portfolio investment is sometimes called "hot money." In contrast with foreign direct investment, where a foreign investor takes some management responsibility for ownership, portfolio investment is a purely financial transaction that can be expanded or liquidated quickly. The IMF publishes the results of its annual Coordinated Portfolio Investment Survey each November. There's no big report to accompany this data, but there are summary tables and, if you like, you can easily generate specific tables for different countries in various years back to 1997.

When I look over this table, part of what catches my eye is the identify of who is listed in the rows and columns--and who is not listed.

For example, it's no big surprise that the U.S. economy both receives by far the largest amount of portfolio investment and also sends both the largest amount. The financial sector offers a potentially promising for the U.S. economy in the globalizing world economy, because it combines the sheer size of the domestic US financial markets with a set of legal and regulatory institutions and private-sector expertise concerning financial markets that is open to the world.

It's a modest surprise to me that the United Kingdom ranks second in both portfolio investment sent and received. After all, the U.S. GDP is more than six times as large as that of the UK. This data suggests that international finance is a much more important part of the UK economy than the US economy. It's no surprise that Japan, as the main financial center for Asia, ranks so highly.

The other striking feature about this kind of table is the countries that aren't included. China, which now has the second-largest GDP in the world, about half the size of the U.S.,  apparently doesn't participate in this survey. Brazil has the 7th largest GDP in the world, Russia is 8th, and India is 10th. They aren't yet showing up among the top origins and destinations for foreign portfolio investment, but in the next decade or so, I suspect that they will. Here's a table from the World Bank showing the size of the 20 biggest economies in 2012. 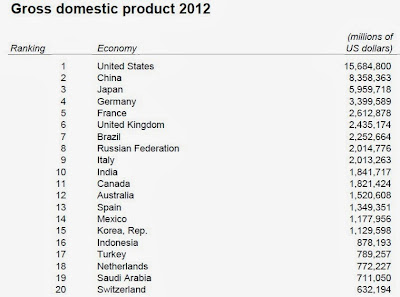