Want a glimpse of how companies can shift their profits among countries in a way that reduces their tax liabilities? Here's the dreaded "Double Irish Dutch Sandwich" as described by the International Monetary Find in its October 2013 Fiscal Monitor. This schematic to show the flows of goods and services, payments, and intellectual property. An explanation from the IMF follows, with a few of my own thoughts. 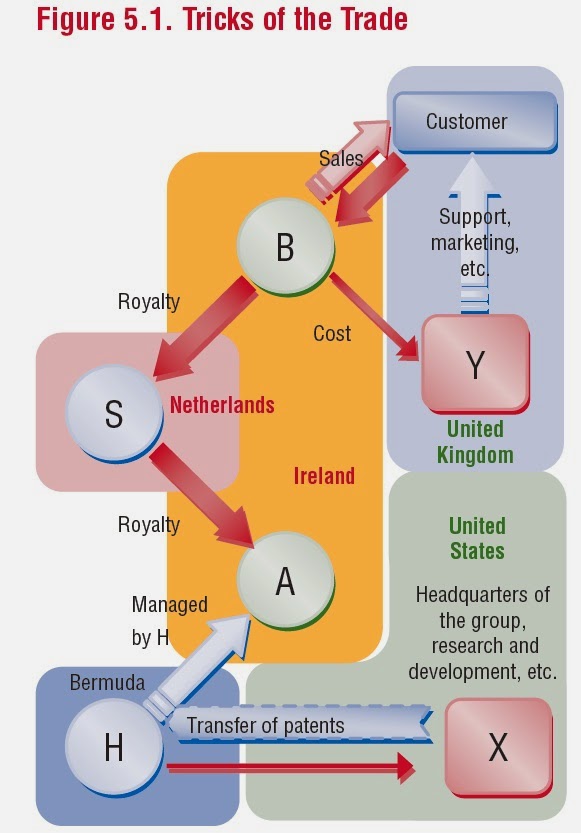 "So many companies exploit complex [taz] avoidance schemes, and so many countries offer devices that make them possible, that examples are invidious. Nonetheless, the “Double Irish Dutch Sandwich,” an avoidance scheme popularly associated with Google, gives a useful flavor of the practical complexities. Here’s how it works (Figure 5.1):

•• It sells the product directly from Ireland through Firm B, with a United Kingdom firm Y providing services to customers and being reimbursed on a cost basis by B. This leaves little taxable profit in the United Kingdom. Now the multinational’s problem is to get taxable profit out of Ireland and into a still-lower-tax jurisdiction.

•• For this, the first step is to transfer the patent from which the value of the service is derived to Firm H in (say) Bermuda, where the tax rate is zero. This transfer of intellectual property is made at an early stage in development, when its value is very low (so that no taxable gain arises in the United States).

•• Two problems must be overcome in getting the money from B to H. First, the United States might use its CFC [controlled foreign corporation] rules to bring H immediately into tax. [Note: The "controlled foreign corporation" rules seek to reduce the ability of companies to move profits to another country via a pure paperwork transaction to what is really the same company.] To avoid this, another company, A, is created in Ireland, managed by H, and headquarters “checks the box” on A and B for U.S. tax purposes. This means that, if properly arranged, the United States will treat A and B as a single Irish company, not subject to CFC rules, while Ireland will treat A as resident in Bermuda, so that it will pay no corporation tax. The next problem is to get the money from B to H, while avoiding paying cross-border withholding taxes. This is fixed by setting up a conduit company S in the Netherlands: payments from B to S and from S to A benefit from the absence of withholding on nonportfolio payments between EU companies, and those from A to H benefit from the absence of withholding under domestic Dutch law.

A few quick thoughts of my own here.

1) The description of this arrangement is not from a muck-raking journalist nor from a lefty lobbying group. When it comes to knowing what happens in the world of international finance, the IMF is a mainstream and establishment source.

2) Under U.S. tax law, these profits would be subject to U.S. tax law if and when they are repatriated to the United States as dividends to shareholders. As the IMF writes (citations omitted): "The United States will charge tax when the money is paid as dividends to the parent—but that can be delayed by simply not paying any such dividends. At present, one estimate is that nearly US$2 trillion is left overseas by U.S. companies." Here's a post from about a year ago on the reasons why U.S. firms find it useful to hold liquid assets overseas.

3) There is an ongoing cat-and-mouse game in corporate tax avoidance, in which government tax agencies write regulations, well-paid corporate tax attorneys construct arrangements to pay lower taxes within the rules, the government tax agencies write more regulations, and so on--in a spiraling descent into ever-greater complexity and confusion. As with many pointless and destructive games, the answer is to define the rules for a different game. President Obama has proposed one corporate tax reform, and other proposals are floating around. When the economic incentives to shift profits are powerful, the corporate tax attorneys will find ways to make it happen. Thus, one goal of such reform should be to reduce the underlying incentives for this sort of profit-shifting.