To investigate these issues, the Council of Economic Advisers has just published "The Labor Force Participation Rate Since 2007: Causes and Policy Implications." The rise in the labor force participation rate from about 1960 up through the mid-1990s was driven both by the baby boom generation reaching working age, and the dramatic entry of women into the (paid) labor force. The decline since about 2000 is largely because the rising proportion of women in the labor force levelled off, and the aging of the baby boom generation is raising the number of retirees. Here's a figure from the report showing the labor force participation rate for men and women separately. 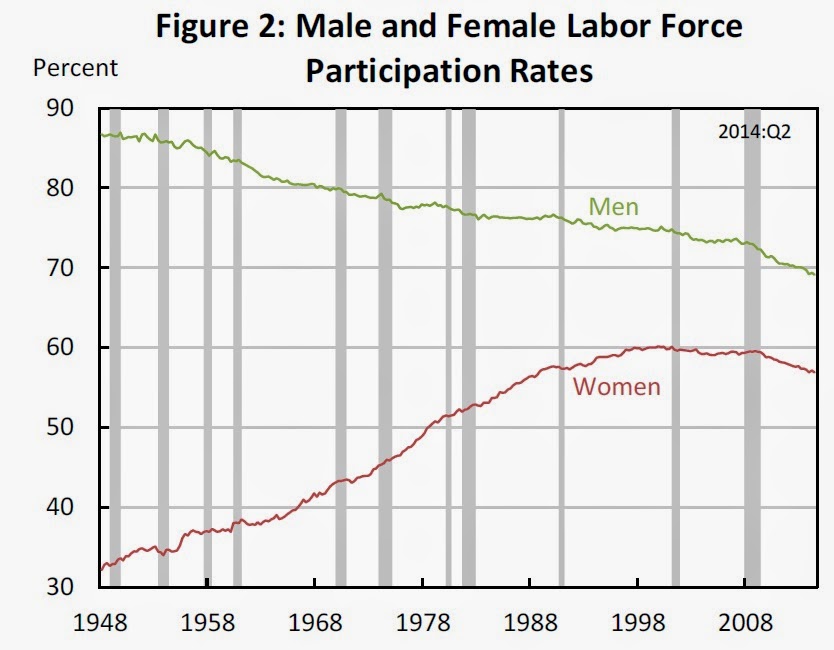 The CEA also notes that during every recession, the labor force participation rate tends to fall a little, as some people give up looking for jobs and thus aren't counted as officially "unemployed." After presenting its own analysis, and showing that it fits fairly well with previous studies of the subject, the CEA notes: "Up until the beginning of 2012 the [labor force] participation rate was generally slightly higher than would have been predicted based on the aging trend and the standard business cycle effects. But in the last two years, the participation rate has continued to fall at about the same rate even though the unemployment rate has been declining rapidly."

In other words, the drop in the labor force participation rate up through about 2012 was explainable based on the aging of the population and the common patterns during a recession. (Here's a post from April 2012 that refers to a study making this point.) In this telling, the real puzzle is not why the labor force participation rate fell up to 2012, but why it has continued to fall so quickly since 2012. To explain what is different about the period since 2012, compared with the period after previous recessions, the CEA report focuses most heavily on how long-term unemployment has been different in the aftermath of the Great Recession. For example, here's one figure showing the share of the total unemployed who have been out of work more than 27 weeks. In past recessions, this share peaked at about 20% of the total unemployed. In the Great Recession, the share of long-term unemployed peaked at above 40% of all unemployed, and even now remains at historically high levels. (Here's a post from July 2013 on the legacy of long-term unemployment.)

Another measure of long-term unemployment is the average duration of unemployment. Again, remember that only those who are actually looking for a job are counted as officially unemployed, not those who have become discouraged and stopped looking. In the last few recessions, the average length of unemployment peaked at around 20 weeks. In the Great Recession, it peaked at about 40 weeks, and is still at a discomfitingly high 35 weeks.

The CEA report looks at some other potential reasons for why labor force participation has dropped off, like a rising share of the 16-24 year-old age bracket being in school, and other breakdowns by age, gender and disability status. At least to me, the most important bottom line is not to focus on the somewhat sterile argument of who should "really" be counted as unemployed. After all, the Bureau of Labor Statistics does also collect statistics on "discouraged" workers and "marginally attached" workers. Instead, the key message is that the lower unemployment rate includes a much larger than usual share of long-term unemployed. Waiting for the U.S. economy to re-absorb these workers has not been showing good results.