When I typed "Main Street vs. Wall Street." into Google search, it spat back 218 million results. The juxtaposition of Main Street and Wall Street seems to have originated with a book called Main Street and Wall Street, written by a Harvard economics professor named William Z. Ripley and published in 1929. In a "Personal Note" at the the book, Ripley writes: "I have confessed the theft of a part of my title to Mr. Sinclair Lewis, the distinguished author of Main Street. He has been pleased to send me his "Godspeed" in the enterprise."

For those whose most recent class in American literature is a few years behind them, Main Street was published in 1920 and became a best-seller. In the Main Street vs. Wall Street comparison, Main Street is meant to embody wholesomeness and "real" America as opposed to the detached and money-hungry financiers. From this perspective, it's always a little odd to remember that Lewis's book is about a young woman who moves from the city of St. Paul to a small town in Minnesota--and hates it because the town is ugly and its residents are mostly smug and unpleasant.

The Main Street/Wall Street metaphor remains a useful one. It captures a number of oppositions: average people and big business; workers and bosses; a real economy of goods and services vs. the financial sector; and a sense of powerlessness when decisions that can have such a large effect on households and towns are made by people who live very different lives in faraway places.
But to a large extent, the Main Street vs. Wall Street trope is also a product of its specific time and place, and represents a view of political economy that fit the economy of the 1920s better than the economy of today.

Back in the 1920s, the role of large corporations in the economy had been transformed by two events. First, there had been a wave of mergers around the start of the 19th century, well-described in Naomi Lamoreaux's book "The Great Merger Movement in American Business, 1805-1904." The introductory chapter is available here. Lamoreaux compiles a table of holding companies where after the consolidations of that time, a single company held more than 70% of the market, between 40-70% of the market, or less than 40% of the market--and even the smallest of these categories is a very large chunk. 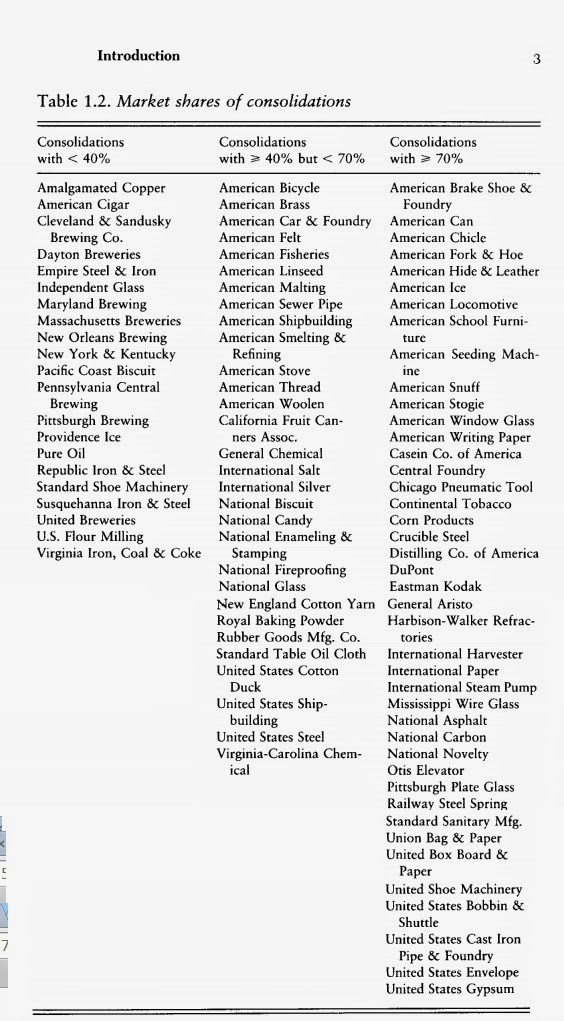 Many of these large enterprises were challenged both by the forces of competition and by the birth of antitrust enforcement with the creation of the Federal Trade Commission and the passage of the Clayton Antitrust Act in 1914. Still, their presence reshaped the organization of America's production.

The creation of these huge companies was then followed by a second step, which as Ripley described it was "the great increase of popular investment in business and other corporations . . . But most persistent and striking of all has been the tendency, since the depression of 1920, toward the transformation of hitherto purely personal businesses, closely owned, into very widely held and loosely governed public enterprises." Among economists, a commonly used phase here is "the separation of ownership and control," referring to the fact that in a publicly owned company, the shareholders own the company, but the company is controlled by a board of directors and its management. The phrase comes from a book by called The Modern Corporation and Private Property, written by Adolf Berle and Gardiner Means, and published three years after Ripley's book in 1932.

Moreover, the dawn of Main Street vs. Wall Street terminology happened at a time when the role of the federal government in the national economy was relatively small. Federal spending was less than 10% of GDP in the years before World War I, and after the wartime spending spike subsided, it was still typically 11-12% of GDP through the 1920s. The federal regulatory state was just beginning to be born, and federal redistribution of income to the poor or the elderly didn't yet exist in any substantial way.

But it's been a long time since the 1920s, and thinking of the economy in Main Street vs. Wall Street terms is somewhat out of date for two main reasons.

First, it has become clear over the decades that while corporate organizations do have considerable power, both economic and political, but they are by no means invulnerable. Ask iconic firms like IBM, AT&T, Kodak, Sears, US Steel, and United Airlines if they are all-powerful.  Look at the 30 companies in the Dow Jones Industrial Index over time and see how they have changed. By my count, only six of the companies in the Dow Jones average in 1976 are still there today--and several of those have changed dramatically: AT&T (no longer the monopoly provider of U.S. telephone services), DuPont, General Electric, and Proctor and Gamble, Standard Oil (N.J) (whichi became Exxon and eventually ExxonMobil), and United Aircraft (which became United Technologies). Moreover, as we enter an era of global supply chains and global competition, where the relative size of the U.S. economy is shrinking compared to the overall world economy, the notion of unconstrained U.S. firms is a lot less true than in the 1920s. General Motors, Chrysler, and Ford are certainly not insulated by their size from global competition.

Second, there are two players in the economic/political picture who played a much smaller role back in the 1920s: Pennsylvania Avenue and K St.

Pennsylvania Avenue runs diagonally from in front of the White House over to the Capitol Building in Washington, D.C. Federal government spending is now twice as large relative to GDP as it was back in the 1920s. Remember that back in the 1920s, the Federal Trade Commission had barely gotten underway. The Federal Reserve wasn't created until 1913, and much of the banking regulation wasn't legislated until the 1930s. The federal income tax was created in 1913.  Add in all the modern the federal regulatory apparatus--securities and banking regulation, environmental, workplace, consumer safety--and the size and reach of government power has dramatically increased. Households had good reason to be concerned with the looming rise of corporate power back in the 1920s, but the possible government counterweights to corporate power are now far more powerful.

But of course, the government is not run by omniscient public policy angels, but rather by everyday men and women who do it as a job. They bring their own areas of ignorance and bias, like anyone would, and find themselves surrounded by special interests that now swarm around the political process, who are sometimes nicknamed K St., because of the large number of lobbyist organizations on that street in Washington, D.C. Year in, year out, more is spend on lobbying than on campaign contributions. Campaign contributions happen under a glare of legally required disclosure; by comparison, lobbying money happens in the shadows. The money spent on lobbying is also probably more tightly focused, not just on big-picture items like companies that claim they will produce clean energy, but also on innumerable regulations where changing the word "required" to "recommended" at a key place in the fine print of legislation can be worth billions of dollars.

In some cases, certain events that are blamed on Wall Street get a hefty boost from crony capitalism cooked up in Pennsylvania Ave. and K St. Whether you opposed the various bailouts of the banks and car companies back in 2008 and 2009, or believed that they were an unpleasant necessity in a grim economic time, it would be peculiar to think of government bailouts as the free market at work. Similarly, whether you think that government subsidies for companies that claim they will soon produce environmentally-friendly products is crony capitalism or a worthwhile long-term economic investment, it would again be peculiar to think of them as the free market at work.

As I wrote earlier, the Main Street vs. Wall Street slogan does speak to some important and real tensions that continue in a modern economy. But we aren't in the economy world of Ripley's 1929 book, either. At least to some extent, giant U.S. corporations have been brought to heel with a mixture of domestic and global competition, which of course arises out of the decisions of consumers about what to buy, together with government oversight. And instead of the 1920s world where a relatively small central government and limited regulatory apparatus left corporate forces unconstrained, Pennsylvania Ave. and K St.  now have considerable power to enact laws, taxes and regulations with their own agendas in mind. The modern agenda for Main Street is how to use its diffuse but inexorable powers of consuming, working, and voting so that Wall Street, Pennsylvania Ave., and K St. are pressured to operate in a constructive tension against each other.