One prism for looking at patterns of global trade is to consider trade between regions of the world. The rows of the table show the origin of world merchandise trade according to the region of the country involved; the columns show the destination of that trade. Thus, if you go to the South and Central America row, you can see that countries of this region exported $201 billion in merchandise to each other in 2012, only slightly more than the $186 billion these countries exported to North America and the $172 billion they exported to Asia. At least to me, this suggests that there are substantial possibilities for gains from trade within the countries of South America. 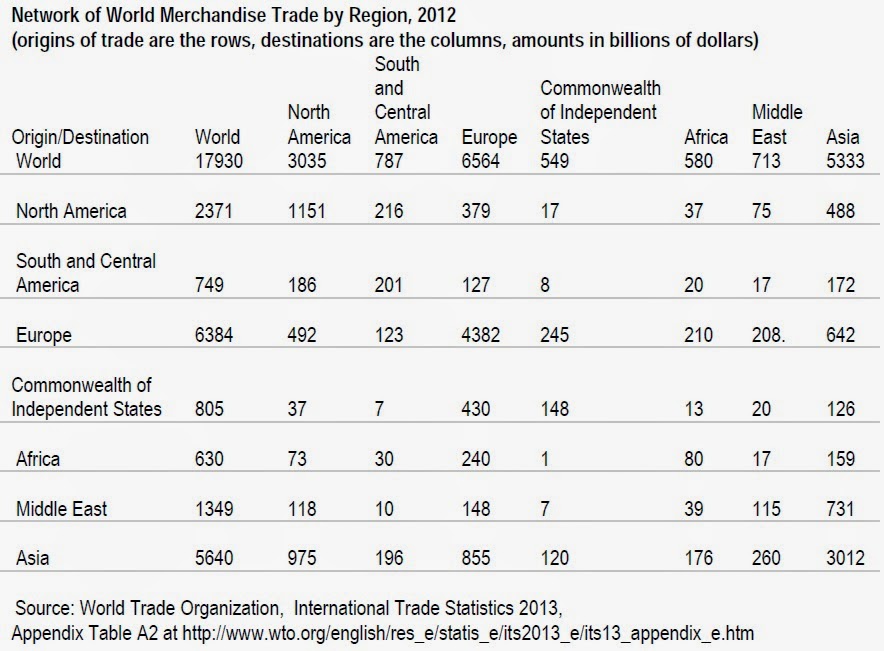 I include this table in each edition of my Principles of Economics text (and if you're teaching an intro econ course, I encourage you to check it out). Here are some lessons try to highlight:

First, the bulk of world trade involves high-income areas of the world, either as exporters, importers, or both. For example, the single biggest number is the $4,382 billion that countries in Europe sell to each other. The level of trade between North American countries appears low compared to Europe, but this is because the European Union includes 27 nations while the trade
in the North American region is between the United States, Canada, and Mexico. Remember,
exports from Germany to Sweden count as international trade, but sales from California to New York would not be counted in this table, since they occur within the U.S. economy.

Finally, trade between some regions is very low; for example, between Africa and Latin America, or between the Middle East and the Commonwealth of Independent States. Indeed, some regions of the world seem economically disconnected from each other. I suspect that in a globalizing world economy, these connections will be gradually created and growing over time.