Macroprudential policy is going mainstream. At least, Janet Yellen says so in her lecture on "Monetary Policy and Financial Stability," given on July 2 as the 2014 Michel Camdessus Central Banking Lecture at the International Monetary Fund. For example, Yellen says at the start of the lecture:

"I will argue that monetary policy faces significant limitations as a tool to promote financial stability: Its effects on financial vulnerabilities, such as excessive leverage and maturity transformation, are not well understood and are less direct than a regulatory or supervisory approach; in addition, efforts to promote financial stability through adjustments in interest rates would increase the volatility of inflation and employment. As a result, I believe a macroprudential approach to supervision and regulation needs to play the primary role."

So what is this macroprudential policy that the Chair of the Federal Reserve says needs to play "the primary role" in addressing financial stability, because conventional monetary policy "faces significant limitations" in the task? Academics have been talking about it for a few years: for examples, see my post on "Macroprudential Monetary Policy: What It is, How it Works" (June 20, 2013), or for a sense of the deeper economic analysis behind macroprudential policy, a useful starting point is "A Macroprudential Approach to Financial Regulation," by Samuel G. Hansen, Anil K. Kashyap, and Jeremy C. Stein, which appeared in the Winter 2011 issue of the Journal of Economic Perspectives. (Full disclosure: My job as Managing Editor of JEP has been paying the household bills since 1986.)

Yellen looks back at the controversy over the housing price bubble that emerged in the U.S. economy in the middle 2000s. For a sense of the dispute, here's a graph showing the federal funds interest rate, the key policy tool that the Fed focused on at the the time. Notice that with the recession of 2001, the Fed cut this rate to stimulate the economy. Reducing the interest rate in a recession is standard practice, but the rate was also cut quite far (as you can see, more than after the 1990-91 recession) and the low rate was then maintained for several years after the 2001 recession had ended. Both at the time, and since then, there has been a controversy that if the Fed had not cut interest rates quite as far, or held interest rates so low for quite as long, then the borrowing that fed the housing price bubble would have been more muted. 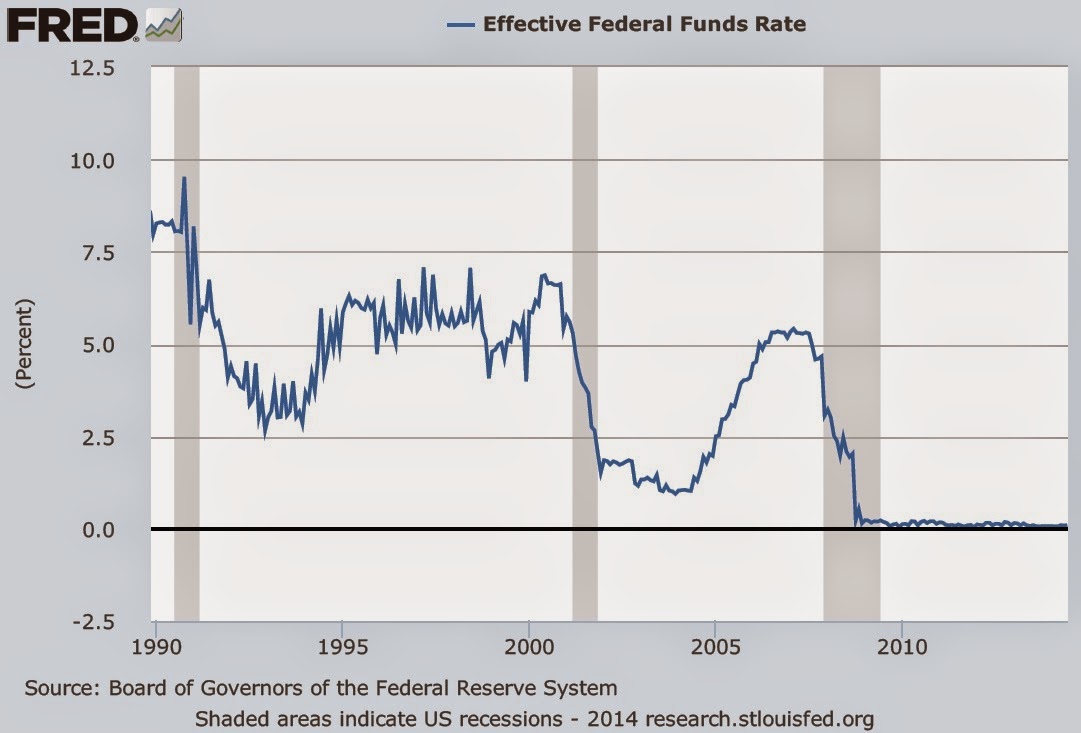 Yellen argues in response that higher interest rates would not have addressed many of the other issues feeding the housing price bubble: like "gaps in the regulatory structure that allowed some SIFIs [systemically important financial institutions] and markets to escape comprehensive supervision, or the lack of "transparency of exotic financial instruments," or "deficiencies in risk measurement and risk management within the private sector." She argues that using higher interest rates to address financial vulnerability is "a very blunt tool." The unemployment rate remained elevated for a time after the 2001 recession in what has now become the U.S. pattern of "jobless recoveries." Yellen argues that higher interest rates back in the early 2000s would have had at best a modest effect in keeping housing prices lower, but it unemployment would have stayed higher for longer. She also point out that "vulnerabilities from excessive leverage and reliance on short-term funding in the financial sector grew rapidly through the middle of 2007, well after monetary policy had already tightened significantly relative to the accommodative policy stance of 2003 and early 2004."

What is macroprudential policy? In the past, financial regulation typically focused on whether individual financial institutions were fundamentally healthy. It considered at one financial institution at a time. The "macro" in macroprudential policy is meant to suggest that regulatory policies and standards should be adjusted with macroeconomic concerns in  mind. Thus, if there is a concern over housing prices rising in a way that leads to a risk of a bubble, government can raise the standards that affect conditions under which banks make loans--leading to smaller loan sizes relative to income or higher down payments. If there is a concern that many financial and nonfinancial institutions are taking on too much debt, in a way that raises the risk of a financial crisis, regulatory standards can be used to require that the institutions hold higher reserves. If there is concern that certain financial instruments are not transparent, or that the risks of such instruments are not being taken into account, regulatory policy can require additional disclosure and require that financial institutions find ways to ameliorate the additional risks.

Yellen is in effect suggesting a division of labor. Conventional monetary policy, like raising and lowering interest rates, would continue to be the main method for addressing recession and inflation. But macroprudential policies would be the way of reducing the chance that a financial crisis would happen. As she says: "In my assessment, macroprudential policies, such as regulatory limits on leverage and short-term funding, as well as stronger underwriting standards, represent far more direct and likely more effective methods to address these [financial stability] vulnerabilities."

Actually, this change is already happening. Yellen says: "We have made considerable progress in implementing a macroprudential approach in the United States ..."

As a current example in the U.S economy, she offers the following more detailed discussion:

"I do see pockets of increased risk-taking across the financial system, and an acceleration or broadening of these concerns could necessitate a more robust macroprudential approach. For example, corporate bond spreads, as well as indicators of expected volatility in some asset markets, have fallen to low levels, suggesting that some investors may underappreciate the potential for losses and volatility going forward. In addition, terms and conditions in the leveraged-loan market, which provides credit to lower-rated companies, have eased significantly, reportedly as a result of a "reach for yield" in the face of persistently low interest rates. The Federal Reserve, the Office of the Comptroller of the Currency, and the Federal Deposit Insurance Corporation issued guidance regarding leveraged lending practices in early 2013 and followed up on this guidance late last year. To date, we do not see a systemic threat from leveraged lending, since broad measures of credit outstanding do not suggest that nonfinancial borrowers, in the aggregate, are taking on excessive debt and the improved capital and liquidity positions at lending institutions should ensure resilience against potential losses due to their exposures. But we are mindful of the possibility that credit provision could accelerate, borrower losses could rise unexpectedly sharply, and that leverage and liquidity in the financial system could deteriorate."

Macroprudential policy is no magic bullet. It requires figuring out where risk-taking has become excessive, where bubbles may be forming in financial markets, and deciding how to react. There is a danger that central banks--which after all, do come under political pressure--will feel some need to prop up asset market values, not just to pop price bubbles as they threaten to inflate. But the Federal Reserve, and a number of other central banks around the world, are now embracing the challenge of macroprudential policy as part of their core mission.