In a globalizing world economy, it's perhaps no surprise that mergers and acquisitions are also crossing national borders more frequently--and that the risk of cartel-like behavior across national borders is also rising. The OECD lays out some background in its recent report, "Challenges of International Co-operation in Competition Law Enforcement."  As a starting point, here's a figure showing the overall upward pattern cross-border merger and acquisition deals in recent decades.

In some cases, these M&A deals raise eyebrows on their own. In other cases, there is a concern that companies may be acting together across borders in a cartel-like way without an explicit deal. Indeed, the number of international cartels that have been discovered has been rising in recent years. "The number of cross-border cartels revealed in an average year has increased substantially since the early 1990s. According to the Private International Cartel (PIC) database,34 about 3 cross-border cartels were revealed via competition authority decisions or prosecutions in an average year between 1990 and 1994. In recent years, from 2007 to 2011, an average of about 16 cross-border cartels has been revealed per year." 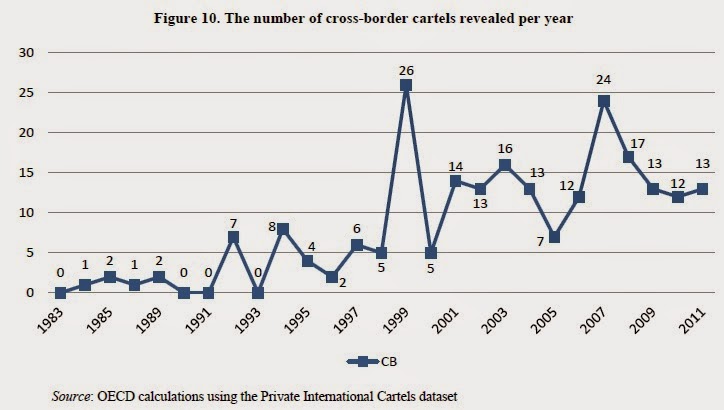 The last two decades have seen a rise in the number of countries with "competition laws" and antitrust authorities to enforce them. 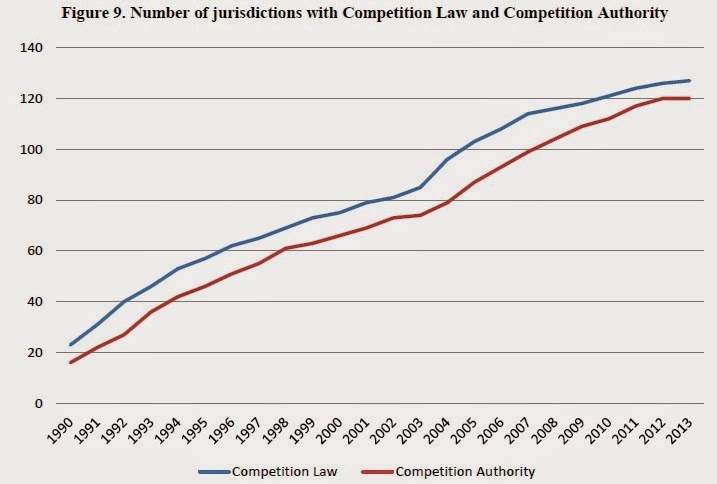 A main focus of the OECD report is the issues involved in coordinating the actions of competition authorities, who often have different legal standards, and I suspect in many cases may be more confrontational toward foreign companies than toward domestic firms. The U.S. is an active player in this area.


"According to Scott Hammond (former Deputy Assistant Attorney General for Criminal Enforcement), the Antitrust Division typically has approximately 50 international cartel investigations open at a time. Since May 1999, more than 40 foreign defendants have served, or are serving, prison sentences in the United States for participating in an international cartel or for obstructing an investigation of an international cartel. Foreign nationals from France, Germany, Japan, the Republic of Korea, Norway, the Netherlands, Sweden, Switzerland, Chinese Taipei and the United Kingdom are among those defendants. In the well-known vitamins case of 1999, for example, twelve individuals, including six European executives, were sentenced to serve time in US prisons for their role in the vitamin conspiracy. The automotive parts investigations exemplify the need for the Antitrust Division to co-operate with foreign counterparts. The investigation included search warrants executed on the same day and conducted at the same time as searches by enforcers in other countries. During the ongoing investigation the Antitrust Division coordinated with the competition law authorities of Japan, Canada, the Republic of Korea, Mexico, Australia, and the European Commission."

The number US Department of Justice antitrust cases with an international dimension has been rising over time. Indeed, international cases have for some years made up most of the fines collected by U.S. antitrust enforcement agencies. Here's a figure showing the number of non-U.S. companies prosecuted in cartel investigations by the U.S. antitrust authorities, and the share of antitrust fines received from these cases. 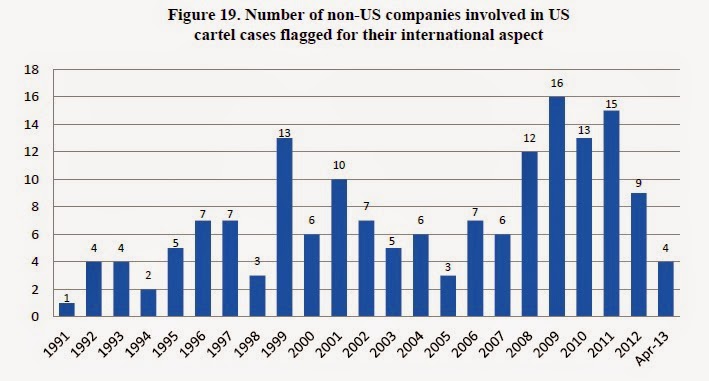 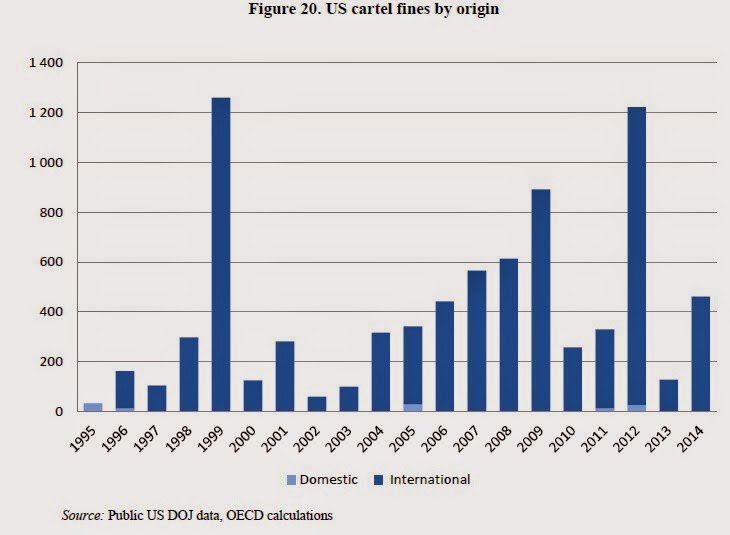 When companies act together to limit competition and to carve up global markets, it is just as harmful as when they do so in domestic markets--but it can be harder to monitor and enforce. The battle is already underway.