High textbook prices are a pebble in the shoe of many college students. Sure, it's not the biggest financial issue they face, But it's a real and nagging annoyance that for hinders performance for many students.

Here's how the U.S. Government Accountability Office (GAO) gave the basic facts in a 2013 report: 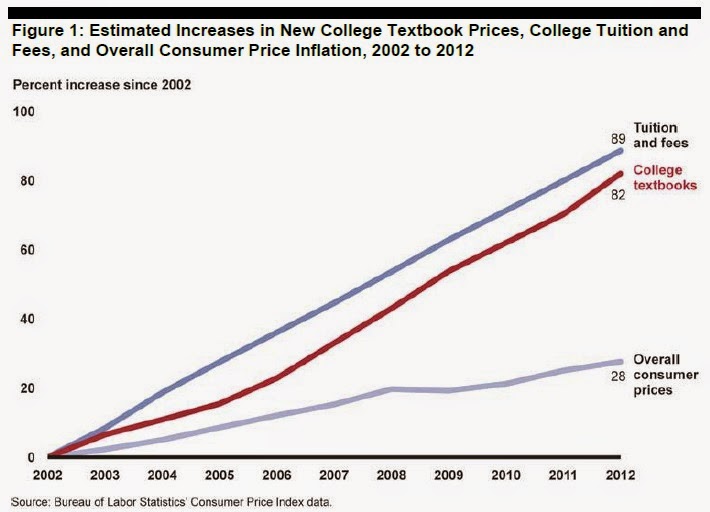 A January 2014 report by Ethan Senack, published by the U.S. PIRG Education Fund and The Student PIRGs, pulls together and cites some of the evidence from recent years in a report called "Fixing the Textbook Market: How Students Respond to High Textbook Costs and Demand Alternatives." A sampling of his commentary:


According to the College Board, the average student spends $1,2001 per year on textbooks and supplies. That’s as much as 39% of tuition and fees at a community college and 14% of tuition and fees at a four-year public institution. ...  It is also important to note that just five textbook companies control more than 80% of the $8.8 billion publishing market, giving them near market monopoly and protecting them from serious competition. ... 65% of students said that they had decided against buying a textbook because it was too expensive. The survey also found that 94% of students who
had foregone purchasing a textbook were concerned that doing so would hurt their grade in a course. ... Nearly half of all students surveyed said that the cost of textbooks impacted how many/which classes they took each semester.

David Kestenbaum and Jacob Goldstein at National Public Radio took up this question recently on one of their "Planet Money" podcasts. They say: ""By popular demand: Why are textbooks so expensive?" For economists, a highlight is that they converse with Greg Mankiw, author of what is currently the best-selling introductory economics textbook, which as they point out is selling for $286 on Amazon. Maybe this is a good place to point out that I am not a neutral observer in this argument: The third edition of my own Principles of Economics textbook is available through Textbook Media. The pricing varies from $25 for online access to the book, up through $60 for both a paper copy (soft-cover, black and white) and online access.

Several explanations for high textbook prices are on offer. The standard arguments are that textbook companies are marketing selling to professors, not to students, and professors are not necessarily very sensitive to textbook prices. (Indeed, one can argue that before the rapid rise in textbook prices in the last couple of decades, it made sense for professors not to focus too much on textbook prices.) Competition in the textbook market is limited, and the big publishers load up their books with features that might appeal to professors: multi-colored hardcover books, with DVDs and online access, together with test banks that allow professors to give quizzes and tests that can be machine-graded. At many colleges and universities, the intro econ class is taught in a large lecture format, which can include hundreds or even several thousand students, as well as a flock of teaching assistants, so some form of computerized grading and feedback is almost a necessity. Some of the marketing by textbook companies involves paying professors for reviewing chapters--of course in the hope that such reviewers will adopt the book.

The NPR show casts much of this dynamic as a "principal-agent problem," the name for a situation in which one person (the "principal") wants another person (the "agent") to act on their behalf, but lacks the ability to observe or evaluate the actions of the agent in a complete way. Principal-agent analysis is often used, for example, to think about the problem of a manager motivating employees. But it can also be used to consider the issue of students (the "principals") wanting the professor (the "agent") to choose the book that will best suit the needs of the students, with all factors of price and quality duly taken into account.  The NPR reporters quote one expert saying that the profit margin for high school textbooks is 5-10%, because those books decisions are made by school districts and states that negotiate hard. However, profit margins on college textbooks--where the textbook choice is often made by a professor who may not even know the price that students will pay--are more like 20%.

The NPR report suggests this principal-agent framework to Greg Mankiw, author of the top-selling $286 economic textbook. Mankiw points out that principal-agent problems are in no way nefarious, but come up in many contexts. For example, when you get an operation, you rely on the doctor to make choices that involve costs; when you get your car fixed, you rely on a mechanic to make choices that involve costs; when you are having home repairs done, you rely on a repair person or a contractor to make choices that involve costs. Mankiw argues that professors, acting as the agents of students, have legitimate reason to be concerned about tradeoffs of time and money. As he notes, a high quality book is more important "than saving them a few dollars"--and he suggests that saving $30 isn't worth it for a low-quality book.

But of course, in the real world there are more choices than a high-quality $286 book and a low-quality $256 book. The PIRG student surveys suggest that up to two-thirds of students are avoiding buying textbooks at all, even though they fear it will hurt their grade, or are shifting to other classes with lower textbook costs. If a student is working 10 hours a week at a part-time job, making $8/hour after taxes, then the difference between $286 book and a $60 book is 28.25 hours--nearly three weeks of part-time work. I am unaware of any evidence in which students were randomly assigned different textbooks but otherwise taught and evaluated in the same way, and kept time diaries, which would show that higher-priced books save time or improve academic performance. It is by no means obvious that a lower-cost book (yes, like my own) works less well for students than a higher-cost book from a big publisher. Some would put that point more strongly.

A final dynamic that may be contributing to higher-prices textbooks is a sort of vicious circle related to the textbook resale market. The NPR report says that when selling a textbook over a three-year edition, a typical pattern was that sales fell by half after the first year and again by half after the second year, as students who had bought the first edition resold the book to later students. Of course, this dynamic also means that many students who bought the book new are not really paying full-price, but instead paying the original price minus the resale price. The argument is that as textbooks have increased in price, the resale market has become ever-more active, so that sales of a textbook in later years have dwindled much more quickly. Textbook companies react to this process by charging more for the new textbook, which of course only spurs more activity in the resale market.

A big question for the future of textbooks is how and in what ways they migrate to electronic forms. On one side, the hope is that electronic textbooks will offer expanded functionality, as well as being cheaper. But this future is not foreordained. At least at present, my sense is that the functionality of reading and taking notes in online textbooks hasn't yet caught up to the ease of reading on paper. Technology and better screens may well shift this balance over time. But even setting aside questions of reading for long periods of time on screen, or taking notes on screen, at present it remains harder to skip around in a computerized text between what you are currently reading and the earlier text that you need to be checking, as well as skipping to various graphs, tables, and definitions. To say it more simply, in a number of subjects it may still be harder to study an on-line text than to study a paper text.

Moreover, as textbook manufacturers shift to an on-line world, they will bring with them their full bag of tricks for getting paid. The Senack report notes:


Today’s marketplace offers more digital textbook options to the student consumer than ever. “Etextbooks” are digitized texts that students read on a laptop or tablet. Similar to PDF documents, e-textbooks enable students to annotate, highlight and search. The cost may be 40-50 percent of the print retail price, and access expires after 180 days. Publishers have introduced e-textbooks for nearly all their traditional textbook offerings. In addition, the emergence of the ereader like the Kindle and iPad, as well as the emergence of many e-textbook rental programs, all seemed to indicate that the e-textbook will alter the college textbook landscape for the better. However, despite this shift, users of e-textbooks are subject to expiration dates, on-line codes that only work once, page printing limits, and other tactics that only serve to restrict use and increase cost. Unfortunately for students, the publishing companies’ venture into e-textbooks is a continuation of the practices they use to monopolize the print market.