A regular bank gets deposits from customers, and then loans out the money to borrowers. But what happens if the loans aren't repaid? Since the 1930s, the U.S. banking system (and the banking system of most other high-income countries) have relied on a two-pronged method of ensuring stability in the banking system: 1) deposit insurance means that the overwhelming majority of bank depositors don't need to worry that their money will be lost; and 2) bank regulation stops banks from taking unreasonably large risks that could lead to the loss of deposits. On the whole, this approach worked fairly well for more than  half-century. But the financial and economic crisis of 2007-2009 revealed a large and growing loophole in these arrangements: the existence of "shadow banks."

A "shadow bank" is any financial institution that gets funds from customers and then in some way lends the money to borrowers. However, a shadow bank doesn't have deposit insurance. And while the shadow bank often faces some regulation, it typically falls well short of the detailed level of risk regulation that real banks face. In this post in May, I tried to explain how shadow banking works in more detail. Many of the financial institutions at the heart of the financial crisis were "shadow banks." For example, Reserve Primary Fund was a large money-market fund that had received money from depositors and had invested some of that money in debt issued by Lehman Brothers. When Lehman went broke, investors began to pull money out of Reserve Primary Fund--and indeed, about $300 billion flowed out of money market mutual funds that money--until the Federal Reserve and the Treasury Department stepped in with guarantees and emergency loan assistance. In turn, investment banks like Lehman Brothers were not standard commercial banks either, but they were relying on continual inflows of short-term borrowing (similar to deposits at a standard bank) and lending out and investing the funds. When their investments turned bad, their ability to receive short-term borrowing dried up at the same time, and they no longer had capital to function.

Five years past the end of the Great Recession, how vulnerable is the U.S. and the world economy to instability from shadow banking? One worrisome dynamic is that the more tightly actual banks are regulated, the more the financial industry comes up with other "shadow banking" institutions for making loans. The IMF devotes a chapter in its October 2014 Global Financial Stability Report to "Shadow Banking Around the Globe: How Large, and How Risky?" From the summary:

Although shadow banking takes vastly different forms across and within countries, some of the key drivers behind its growth are common to all: a tightening of banking regulation and ample liquidity conditions, as well as demand from institutional investors, tend to foster nonbanking activities. The current financial environment in advanced economies remains conducive to further growth in shadow banking. Many indications there point to the migration of some activities—such as lending to firms—from traditional banks to the nonbank sector. Shadow banking can play a beneficial role as a complement to traditional banking by expanding access to credit or by supporting market liquidity, maturity transformation, and risk sharing. It often, however, comes with banklike risks, as seen during the 2007–08 global financial crisis. Although data limitations prevent a comprehensive assessment, the U.S. shadow banking system appears to contribute most to domestic systemic risk; its contribution is much less pronounced in the euro area and the United Kingdom.


Along with money market mutual funds, the shadow banking sector includes hedge funds, non-bank finance companies and nonbank mortgage  originators, broker-dealers, investment funds, real estate investment trusts, and the "structured finance" sector that includes asset-backed commercial paper, collateralized debt obligations, residential mortgage-backed securities, and structured investment vehicles. Many pension funds and insurance companies now do some direct lending of their funds to businesses. As one example of a financial innovation facilitated by banks, but ultimately where the funds are held outside banks, I posted about the leveraged loans sector a few days ago. These many sectors each have their own characteristics and pose their own risks, and it's an oversimplification to lump them together. That said, here's how the assets in shadow banking compare with conventional bank assets in various countries and areas. The U.S. ranks so highly, in part, because its financial system is less dominated by banks than is the financial system of many countries in the EU and elsewhere. Still the difference is striking. 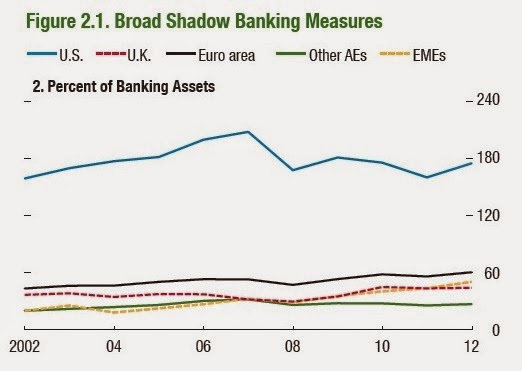 The IMF makes an effort to sort through the details of all the different shadow banking sectors and to evaluate the risks involved. The IMF notes:

It is discomforting to me to read that for the U.S., shadow banking risks are "slightly below precrisis levels." In general, the policy approach here is clear enough. As the IMF notes: "Overall, the continued expansion of finance outside the regulatory perimeter calls for a more encompassing
approach to regulation and supervision that combines a focus on both activities and entities and places greater emphasis on systemic risk and improved transparency."

Easy for them to say! But when you dig down into the specifics of the shadow banking sector, not so easy to do.