Keeping Up with the Joneses on Energy Conservation

The phrase "Keeping Up with the Joneses" seems to have become firmly established in U.S. culture as a result of a prominent comic strip by that name which started in 1913 and ran for several decades.
Characters in the cartoon often referred to what the Joneses were doing but you never met them. Usually the term refers to a desire to imitate the higher and more conspicuous consumption levels of one's neighbors. But can a desire to follow the neighbors also be harnessed to energy conservation efforts?

Hunt Allcott and Todd Rogers offer evidence on that question in "The Short-Run and Long-Run Effects of Behavioral Interventions: Experimental Evidence from Energy Conservation," in the October 2014 issue of the American Economic Review (104:10, pp. 3003–3037). The AER is not freely available on line, but many readers will have access through library subscriptions. (Full disclosure: The AER is published by the American Economic Association, which also publishes the Journal of Economic Perspectives, where I work as Managing Editor.) They write:


We study a widely-implemented and highly-publicized behavioral intervention, the “home energy report” produced by a company called Opower.The Opower reports feature personalized energy use feedback, social comparisons, and energy conservation information, and they are mailed to households every month or every few months for an indefinite period. Utilities hire Opower to send the reports primarily because the resulting energy savings help to comply with state energy conservation requirements. There are now 6.2 million households receiving home energy reports at 85 utilities across the United States.

At some of the utilities, the Opower notices have been implemented as a randomized control trial, which makes it relatively straightforward to compare the behavior of those who receive the notices and those who don't. One can also use this data to look at questions like whether the notice might have a short-term effect that fades unless the reminders continue, or a longer-term effect that continues for a time and then fades as people get tired of receiving the notices. Here's an example of the front and back of a typical Opower notice: 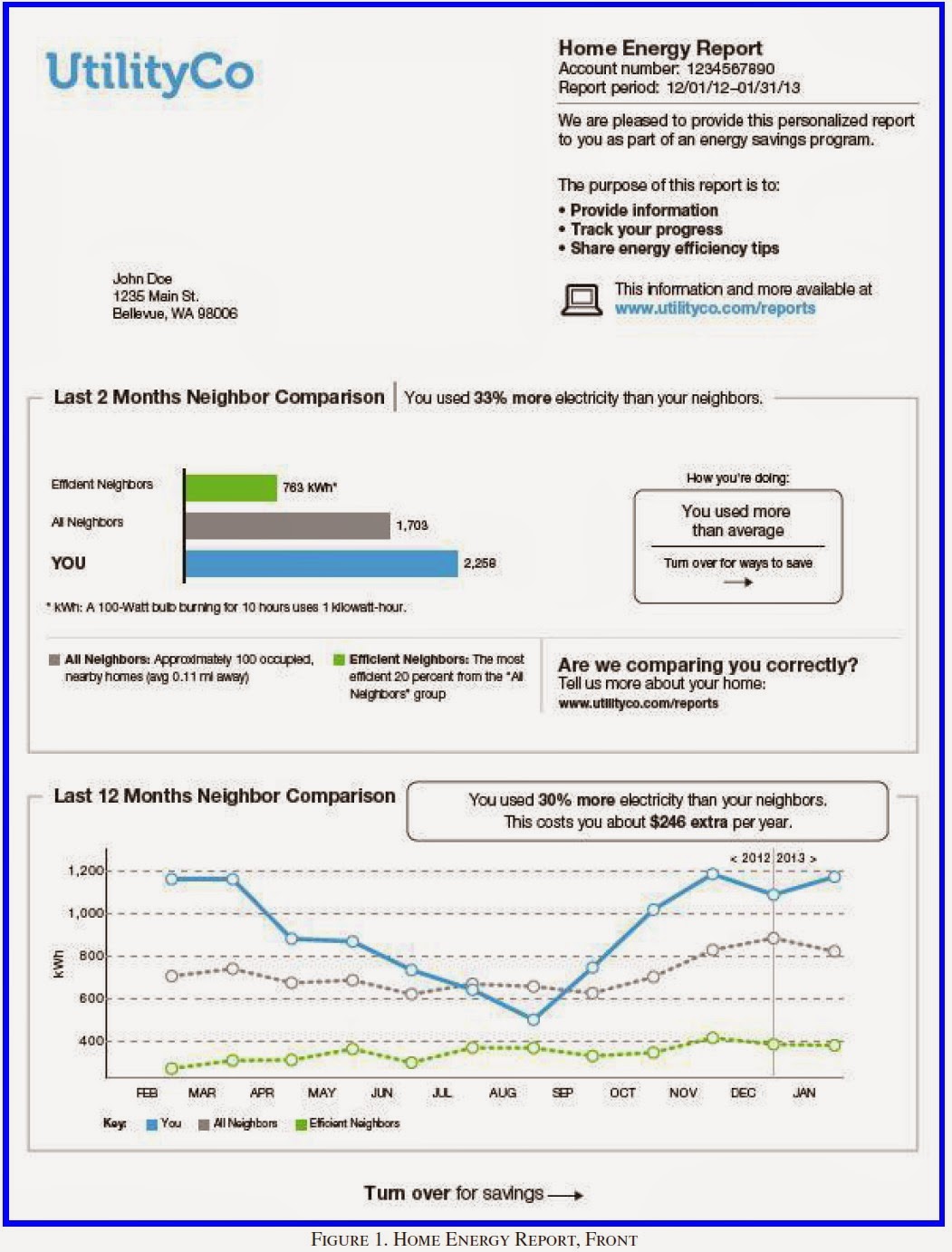 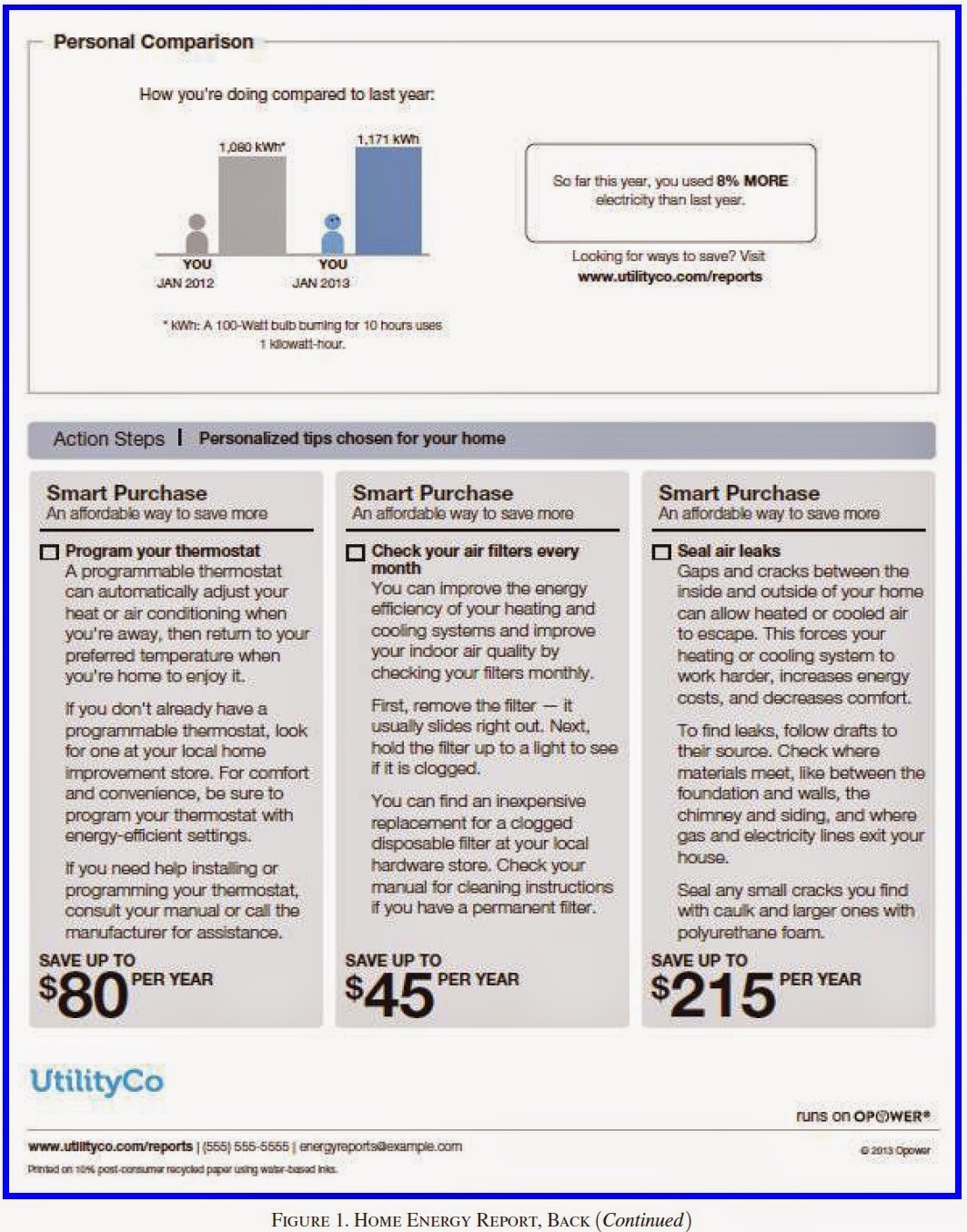 What effect do these notices have? Allcott and Rogers report that when first receiving a notice, a number of consumers show a quick but short-term reduction in energy use. As people receive more notices, this cycle of reducing consumption and then bouncing back gets smaller. But the repetition of the message seems to have a longer-term effect after two years--that is, people's habits have changed in a way that lasts for several more years. In their words:

At first, there is a pattern of “action and backsliding”: consumers reduce electricity use markedly within days of receiving each of their initial reports, but these immediate efforts decay at a rate that might cause the effects to disappear after a few months if the treatment were not repeated. Over time, however, the cyclical pattern of action and backsliding attenuates. After the first four reports, the immediate consumption decreases after report arrivals are about five times smaller than they were initially. For the groups whose reports are discontinued after about two years, the effects decay at about 10 to 20 percent per year—four to eight times slower than the decay rate between the initial reports. This difference implies that as the intervention is repeated, people gradually develop a new “capital stock” that generates persistent changes in outcomes. This capital stock might be physical capital, such as energy efficient lightbulbs or appliances, or “consumption capital”—a stock of energy use habits ... Strikingly, however, even though the effects are relatively persistent and the “action and backsliding” has attenuated, consumers do not habituate fully even after two years: treatment effects in the third through fifth years are 50 to 60 percent stronger if the intervention is continued instead of discontinued.

One reason for having utilities encourage energy conservation is because it can be cheaper than building additional electricity generation plants, and facing the broader social costs of the environmental costs of such plants. Electricity in the US across all sectors of the economy now costs about 11 cents per kilowatt/hour, Thus, Allcott and Rogers look at the cost-effectiveness of sending Opower reports, defined "as the cost to produce and mail reports divided by the kilowatt-hours of electricity conserved."

They find that a one-shot Opower notice has has a cost effectiveness of 4.31 cents/kWh. Extending the intervention to two years costs more in sending out additional notices. But the continual reminders keep encouraging people to conserve, and also over that time people build up a pattern of reduced energy consumption. In their words, "The two-year intervention is much more cost effective than the oneshot intervention, both because people have not habituated after the first report and because the capital stock formation process takes time." Thus, the overall cost-effectiveness after about two years is about 1.5 cents/kWh.

After two years, it seems possible to slack off on the reminders, and to send them perhaps twice a year rather than with every monthly bill. This step reduces the cost of sending the reminders, but seems to keep about the same level of effectiveness in terms of holding down energy consumption. Indeed, households don't seem to get used to the reports, but seem to keep responding to the notices even after a third and fourth year. As they write: "However, it is remarkable how little cost effectiveness decreases after two years, suggesting strikingly little habituation."

I'm not surprised that these kinds of notices about how much electricity the Joneses are using have a short-run effect. But the surprise in these results is that people keep chasing the Joneses toward greater electricity conservation even after several years of receiving these notices. It makes one wonder if there aren't some other ways in which information and social pressure, discreetly and privately applied, might be used in the service of environmental goals.